The evidence of social decay in America is becoming more visible. As other countries continue to show increases in life expectancy, the US continues its deterioration.

Overdose deaths reached a new high in 2017, topping 70,000, while the suicide rate increased by 3.7%, the CDC’s National Center for Health Statistics reports.

Dr. Robert Redfield, CDC director, called the trend tragic and troubling. “Life expectancy gives us a snapshot of the Nation’s overall health and these sobering statistics are a wakeup call that we are losing too many Americans, too early and too often, to conditions that are preventable,” he wrote in a statement.

While this assessment is technically correct, it is too superficial in seeing the rising rate of what Angus Deaton and Ann Case called “deaths of despair” as a health problem, rather than symptoms of much deeper societal ills. Americans take antidepressants at a higher rate than any country in the world. The average job tenure is a mere 4.4 years. In my youth, if you changed jobs in less than seven or eight years, you were seen as an opportunist or probably poor performer. The near impossibility of getting a new job if you are over 40 and the fact that outside hot fields, young people can also find it hard to get work commensurate with their education and experience, means that those who do have jobs can be and are exploited by their employers. Amazon is the most visible symbol of that, working warehouse workers at a deadly pace, and regularly reducing even white collar males regularly to tears.

On top of that, nuclear families, weakened communities, plus the neoliberal expectation that individuals be willing to move to find work means that many Americans have shallow personal networks, and that means less support if one suffers career or financial setbacks.

But the big driver, which the mainstream press is unwilling to acknowledge, is that highly unequal societies are unhealthy societies. We published this section from a Financial Times comment by Michael Prowse in 2007, and it can’t be repeated often enough:

Those who would deny a link between health and inequality must first grapple with the following paradox. There is a strong relationship between income and health within countries. In any nation you will find that people on high incomes tend to live longer and have fewer chronic illnesses than people on low incomes.

Yet, if you look for differences between countries, the relationship between income and health largely disintegrates. Rich Americans, for instance, are healthier on average than poor Americans, as measured by life expectancy. But, although the US is a much richer country than, say, Greece, Americans on average have a lower life expectancy than Greeks. More income, it seems, gives you a health advantage with respect to your fellow citizens, but not with respect to people living in other countries….

And this extract comes from a 2013 article, Why Are Americans’ Life Expectancies Shorter than Those of People in Other Advanced Economies?

The stats first. They tell a clear story: Americans now live shorter lives than men and women in most of the rest of the developed world. And that gap is growing.

Back in 1990, shouts a new study published last week in the prestigious Journal of the American Medical Association, the United States ranked just 20th on life expectancy among the world’s 34 industrial nations. The United States now ranks 27th — despite spending much more on health care than any other nation.

Americans, notes an editorial the journal ran to accompany the study, are losing ground globally “by every” health measure.

In the Wall Street Journal, for instance, a chief wellness officer in Ohio opined that if Americans exercised more and ate and smoked less, the United States would surely start moving up in the global health rankings.

But many epidemiologists — scientists who study health outcomes — have their doubts. They point out that the United States ranked as one of the world’s healthiest nations in the 1950s, a time when Americans smoked heavily, ate a diet that would horrify any 21st-century nutritionist, and hardly ever exercised.

The University of Washington’s Dr. Stephen Bezruchka has been tracking these outcomes since the 1990s. The new research published in the Journal of the American Medical Association, Bezruchka told Too Much last week, should worry Americans at all income levels.

“Even if we are rich, college-educated, white-skinned, and practice all the right health behaviors,” he notes, “similar people in other rich nations will live longer.”

A dozen years ago, Bezruchka published in Newsweek the first mass-media commentary, at least in the United States, to challenge the conventional take on poor U.S. global health rankings.

To really understand America’s poor health standing globally, epidemiologists like Bezruchka posit, we need to look at “the social determinants of health,” those social and economic realities that define our daily lives.

None of these determinants matter more, these researchers contend, than the level of a society’s economic inequality, the divide between the affluent and everyone else. Over 170 studies worldwide have so far linked income inequality to health outcomes. The more unequal a society, the studies show, the more unhealthy most everyone in it — and not the poor alone.

Just how does inequality translate into unhealthy outcomes? Growing numbers of researchers place the blame on stress. The more inequality in a society, the more stress on a daily level. Chronic stress, over time, wears down our immune systems and leaves us more vulnerable to disease.

The Wall Street Journal has more detail on the breakdown of the further decline in US life expectancy, and also points out how other countries are continuing to show progress:

Data the Centers for Disease Control and Prevention released on Thursday show life expectancy fell by one-tenth of a year, to 78.6 years, pushed down by the sharpest annual increase in suicides in nearly a decade and a continued rise in deaths from powerful opioid drugs like fentanyl. Influenza, pneumonia and diabetes also factored into last year’s increase.

Economists and public-health experts consider life expectancy to be an important measure of a nation’s prosperity. The 2017 data paint a dark picture of health and well-being in the U.S., reflecting the effects of addiction and despair, particularly among young and middle-aged adults, as well as diseases plaguing an aging population and people with lower access to health care…

Life expectancy is 84.1 years in Japan and 83.7 years in Switzerland, first and second in the most-recent ranking by the Organization for Economic Cooperation and Development. The U.S. ranks 29th..

White men and women fared the worst, along with black men, all of whom experienced increases in death rates. Death rates rose in particular for adults ages 25 to 44, and suicide rates are highest among people in the nation’s most rural areas. On the other hand, deaths declined for black and Hispanic women, and remained the same for Hispanic men…. 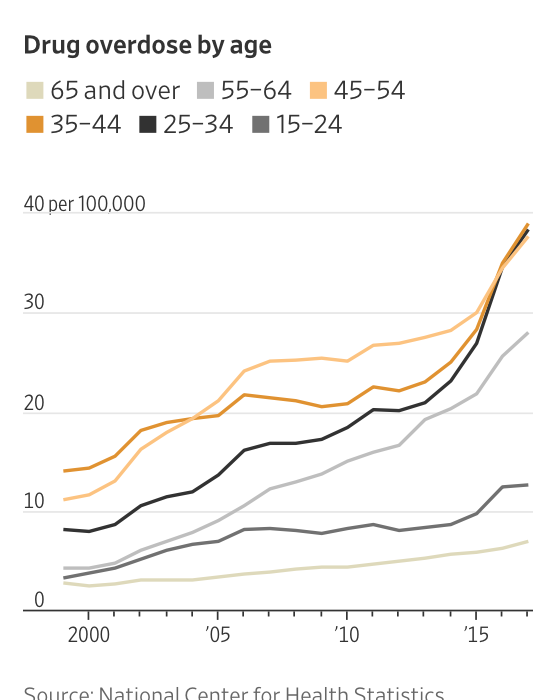 Earlier this century, the steady and robust decline in heart-disease deaths more than offset the rising number from drugs and suicide, Dr. Anderson said. Now, “those declines aren’t there anymore,” he said, and the drug and suicide deaths account for many years of life lost because they occur mostly in young to middle-aged adults.

While progress against deaths from heart disease has stalled, cancer deaths—the nation’s No. 2 killer—are continuing a steady decline that began in the 1990s, Dr. Anderson said. “That’s kind of our saving grace,” he said. “Without those declines, we’d see a much bigger drop in life expectancy.”… 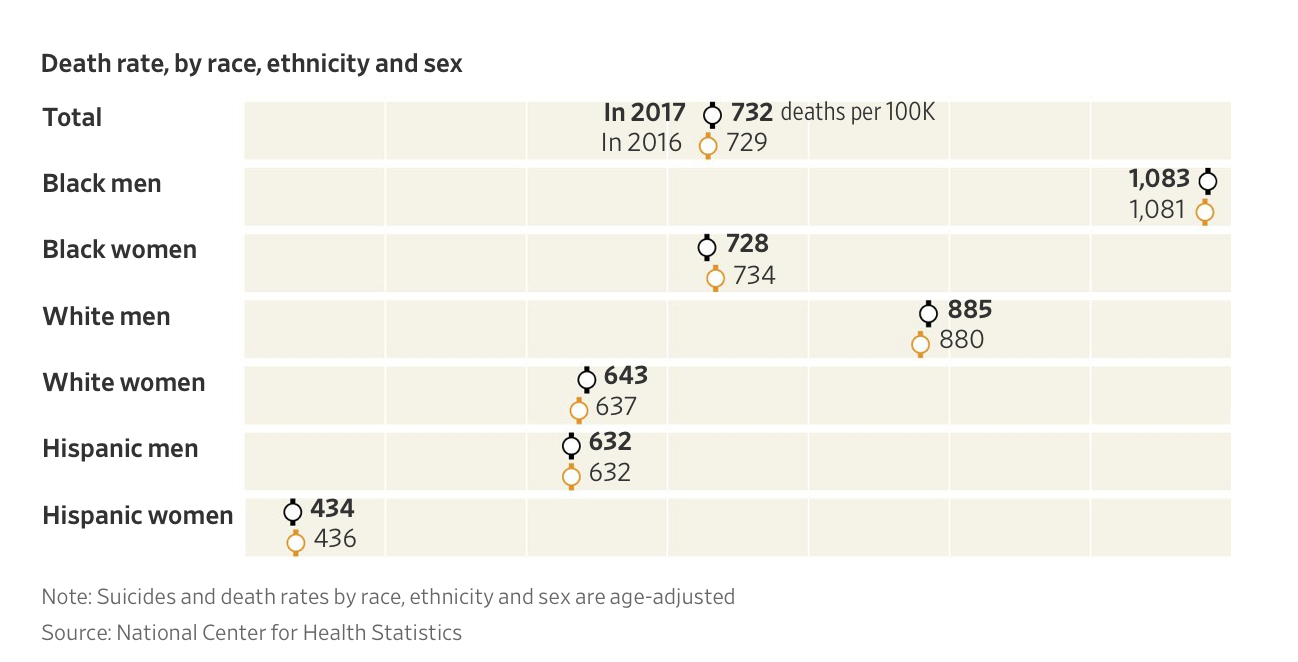 Suicides rose 3.7% in 2017, accelerating an increase in rates since 1999, the CDC said. The gap in deaths by suicide widened starkly between cities and the most rural areas between 1999 and 2017, the data show. The rate is now far higher in rural areas. “There’s a much wider spread,” Dr. Hedegaard said.

“This is extremely discouraging,” Christine Moutier, chief medical officer of the American Foundation for Suicide Prevention, said of the suicide-rate increase. Studies show that traumas such as economic difficulties or natural disasters, along with access to lethal means including guns and opioid drugs, and lack of access to care can affect suicide rates, she said. More accurate recording of deaths may also have added to the numbers, she said.

Japan leads the pack in life expectancy and pretty much every other measure of social well being. Yet when its financial bubbles were bigger than the ones in the US pre our crisis, and it’s on its way to having a lost three decades of growth. On top of that, Japan has one of the worst demographic crunches in the world, in terms of the aging of its population. So how it is that Japan is coping well with decline, while the US is getting sicker in many ways (mental health, obesity, falling expectancy)?

It’s easy to hand-wave by saying “Japanese culture,” but I see the causes as more specific. The Japanese have always given high employment top priority in their economic planning. Entrepreneurs are revered for creating jobs, not for getting rich. Similarly, Japan was long criticized by international economist types for having an inefficient retail sector (lots of small local shops), when they missed the point: that was one way of increasing employment, plus Japanese like having tight local communities.

After their crisis, Japanese companies went to considerable lengths to preserve jobs, such as by having senior people taking pay cuts and longer term, lowering the already not that large gap between entry and top level compensation. The adoption of second-class workers (long-term temps called “freeters”) was seen as less than ideal, since these workers would never become true members of the company community, but it was better than further reducing employment.

Contrast that to our crisis response. We reported in 2013 that the top 1% got 121% of the income gains after the crisis. The very top echelon did better at the expense of everyone else. Longer term, lower-income earners have fallen behind. From a 2017 MarketWatch story, quoting a World Economic Forum report: “America has experienced ‘a complete collapse of the bottom 50 percent income share in the U.S. between 1978 to 2015.’”

There is a lot of other data that supports the same point: inequality continues to widen in America. The areas that are taking the worst hits are states like West Virginia and Ohio that have been hit hard by deindustrialization. But the elites are removed in their glamorous cities and manage not to notice the conditions when they transit through the rest of America. They should consider themselves lucky that America’s downtrodden are taking out their misery more on themselves than on their betters.