CalPERS has abandoned the part of its private equity “new business model” that it tried to implement, a “fund of funds” scheme that we has criticized as likely to hurt returns and corrupt-looking how it was being implemented.

However, CalPERS has changed the spin but not the substance of what it is trying to do with its deliberately misrepresented part of its of its “new business model,” and has even gone from trying to depict it as “innovative” to presenting it as completely old hat, which it isn’t. Having gotten key parts of the story wrong before, the main outlets that cover CalPERS continue to muff their coverage.

CalPERS’ “four pillars” had been:

Continuing to invest in private equity funds, but outsourcing most and over time potentially all to “fund fo fund” managers, introducing another layer of fees and costs The last two CalPERS had misleadlingly called “CalPERS Direct” even though this was never direct investing. Direct investing means cutting out the middleman and doing the investing in house with your own staff. Even the CalPERS-friendly expert Dr. Ashby Monk, brought in to give the board a pep talk, felt compelled to point out that what CalPERS was doing was not direct investing. And as Dan Primack said shortly after CalPERS announced its new scheme, in CalPERS sets questionable private equity course:

There are only three things in life you can count on: Death, taxes and CalPERS doing strange stuff with private equity….

The comp is supposed to be Canada’s big public pensions, which have spent the past decade building direct PE investing platforms and deemphasizing indirect investments with outside managers. But those Canadian systems generally maintain oversight rather than creating independent boards. Or, put more simply: CalPERS is creating an indirect model for direct investing, which seems to largely defeat the point.

CalPERS also presented two other changes it planned to make. One was that the two new entities it would create would be evergreen and would hold investments for a long time and that it would expand its current emerging manager program, which are managed by Grosvenor in two fund of funds.

CalPERS invited six fund managers, Blackrock, Goldman, AlpInvest (a subsidiary of Carlyle), Hamilton Lane, and Neuberger Berman to submit proposals over the last Christmas/New Year holiday. We explained why this program was likely to hurt returns as well as how the solicitation process was deeply flawed. One of the objections in the second post: “CalPERS threw it entirely on the outside firms to tell CalPERS what it ought to have. Would you ever allow a used car salesman to pick your car for you?”

CalPERS Retreats and Changes Its Messaging

We had pointed out that CalPERS looked to be having trouble with its funds of funds scheme, since the original schedule had the finalists presenting to the CalPERS board in March or April, and those dates came and went with no beauty show.

CalPERS staffer John Cole admitted in the Investment Committee meeting this week that CalPERS was no longer pursuing the fund of fund manager solicitation.

But CalPERS has also changed its messaging about its plan to create two general partners, with all the extra risk and cost of a startup, as well as being poorly diversified by putting so much money in the hands of two managers. CalPERS made a great deal of noise in May about CalPERS Direct, which we and Primack debunked as being anything but that. As we pointed out in May:

Per the chart below, you can see that we are not exaggerating when we call Eliopoulos’ sales patter a Big Lie. Repeating the word “direct” does not make it so. any more than when Trump doubles down on things that are obviously false, like his inauguration getting record turnout. 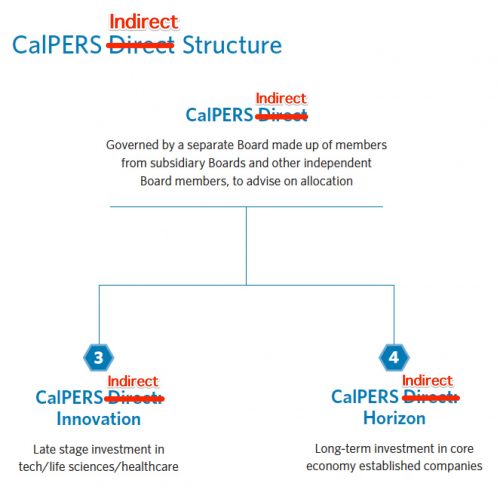 Eliopoulos apparently wants to relegate CalPERS not only to being a mere limited partner, as in a passive investor, in its two additional investment rackets, but to interpose two layers of boards between them and CalPERS.2 One can only conclude he wants to make damned sure CalPERS has no idea what is going on with the money it commits to these vehicles, and that they are even more of a black box than private equity is already. It appears that avoiding even the weak disclosure called for by California law is of paramount importance.

Yet all of the supposedly savvy business press that covers CalPERS took up the false claim that this program would be direct investing, including Joshua Franklin at Reuters, Christine Idzelis at Institutional Investor, Randy Diamond for Chief Investment Officer, and Mark Anderson of the Sacramento Business Journal. As one private equity professional said, “The press is easily confused and CalPERS makes a point of confusing them.”

In its Investment Committee meeting this week, departing Chief Investment Officer Ted Eliopoulos conceded that CalPERS would simply be entering into a typical general partner/limited partner type arrangement, specifically a “separately managed account” where the limited partner has his own fund that the general partner manages, as opposed to being one of many limited partners in a so-called “co-mingled fund”. But that new spin is misleading too. CalPERS, for reasons that have yet to be adequately or coherently explained, is setting up two brand spanking new partnerships to make these investments, and intends to select the key staff that it will stake. Now that CalPERS has ‘fessed up that these are just really big separately managed accounts, why not farm out the money to someone with a track record, rather than gamble on a newly created firm, particularly since research shows they underperform?

It was remarkable to see how reporters garbled the latest developments. For instance, from Arlene Jacobs at Pensions & Investment, by apparently not bothering to read the solicitation materials for the scuppered funds of funds plan, does not comprehend that they were never intended to be for the emerging manager program, which has always been a fund of fund, and CalPERS has not given any indication that it intends to change that. See how she conflates them:

“We have come to the realization after a lot of analysis and discussion that the structure is unlikely to meaningfully strengthen our organization,” Mr. Cole said on Tuesday.

And if you doubt my reading, the very next paragraph makes her error clear:

“So as we complete our search, which will be in early 2019, for a permanent head of our private equity team, we will re-evaluate our options under pillar two (the emerging manager portfolio).”

No, as you can see from the first chart above. pillar one is emerging managers. Pillar two, which is what the new fund of fund manager program was to address, is “partnership model,” as in investing with new funds offered by existing fund managers.

By contrast, Randy Diamond at Chief Investment Officer got this part of the story right:

The California Public Employees’ Retirement System (CalPERS) has ended its consideration of a plan that would have seen a strategic partner play a key role in running its existing $27 billion plus private equity program.

BlackRock, Goldman Sachs Asset Management, Neuberger Berman, AlpInvest Partners, Hamilton Lane, and HarbourVest Partners had all submitted plans to CalPERS early this year detailing the role they would play in managing the largest private equity portfolio in the US.

John Cole, a CalPERS senior investment officer, told the investment committee at its meeting on November 13 that the plan is now off the table.

“A year ago, we thought maybe it would be best to find the large partner in a discretionary role to help us identify good funds and to expand our relationships to include more co-investing and access to secondary transactions,” he said…

Cole did not go into detail and CalPERS never specified whether the chosen firm would have run all or part of the private equity program, which is mostly invested in co-mingled funds with general partners.

It was also good to see Diamond include this troubling part of the history of the failed idea:

CalPERS had been in exclusive talks with the world’s largest asset manager, BlackRock, before announcing that it was seeking proposals from a wider set of managers to be a strategic partner in the administration of the private equity program.

It was therefore distressing to see Diamond continue to parrot CalPERS’ false “direct investing” label, particularly since CalPERS is trying to reposition that and Diamond’s own words in the second paragraph below contradict the “direct investment” claim:

CalPERS is also pursuing an expansion of its private equity program, pending board approval, creating its own $20 billion direct investment program that would invest in later-stage companies in the venture cycle and take buy and hold stakes in established companies.

The expansion would be managed by a separate organization, funded by CalPERS, that would have the power to make investments without the approval of the CalPERS board.

Dietrich Knauth at PE Hub was the closest to getting it right in its first sentence:

As we said, the new scheme is not like a “tried and true” separately managed account. CalPERS is bizarrely trying to divert attention from the fact that it is trying to enrich set up two new general partner. If CalPERS were merely committing money to two super large separately managed accounts, it wouldn’t take months of closed session meetings and Silicon Valley fixer Larry Sonsini drafting governance documents to do that.

Having said that, calling it a separately managed account is a less inaccurate description than “direct investing”.

But the headline, CalPERS plays down ambitious plan to become direct PE investor, perpetuates the confusion by creating the impression that CalPERS has changed its plans in a significant way for its last two pillars, as opposed to changing its messaging.

But the reversal of the fund of funds scheme, which as Diamond insinuated, looked intended from the very offset to hand the business to BlackRock, should send alarm bells ringing. CalPERS spent well over a year on what was a very simple to execute idea, only to figure out it made no sense. Why should we believe that the more radical and difficult elements of this scheme make any more sense?