Yves here. In case you hadn’t noticed it, the economics discipline has doctrinal norms. Academics who stray too far from it find themselves welcome only at the small number of colleges and universities, such as the University of Missouri – Kansas City and the University of Massachusetts – Amherst, that embrace heterodox views.

The top five economics journals play a large role in enforcing the orthodoxy. Jamie Galbraith has described how he’d submit suitably mathed-up papers to one of the heavyweights, get an initial positive response, but when they understood where he was going, they’d alway reject the paper. The reviewers would claim that the mathematics were flawed, when that was not the case. But being published by the top five is essential to advancing in prestigious economics faculties, such as Harvard, Chicago, Princeton, and MIT.

It should be noted that no real science has a rigid hierarchy of journals like this. The article documents disfunction among the editors at these journals, such as incest and clientelism.

Anecdotal evidence suggests that the ‘Top Five’ economics journals have a strong influence on tenure and promotion decisions, but actual evidence on their influence is sparse. This column uses data on employment and publication histories for tenure-track faculty hired by the top US economics departments between 1996 and 2010 to show that the impact of the Top Five on tenure decisions dwarfs that of non-Top Five journals. A survey of US economics department faculties confirms the Top Five’s outsized influence.

Anyone who talks with young economists entering academia about their career prospects and those of their peers cannot fail to note the importance they place on publication in the so-called Top Five journals in economics: the American Economic Review, Econometrica,the Journal of Political Economy,the Quarterly Journal of Economics, and the Review of Economic Studies.The discipline’s preoccupation with the Top Five is reflected in the large number of scholarly papers that study aspects of the these journals, many of which acknowledge the Top Five’s de facto role as arbiter in tenure and promotion decisions (e.g. Ellison 2002, Frey 2009, Card and DellaVigna 2013, Anauti et al. 2015, Hamermesh 2013, 2018, Colussi 2018).

While anecdotal evidence suggests that the Top Five has a strong influence on tenure and promotion decisions, actual evidence on such influence is sparse. Our paper (Heckman and Moktan 2018) fills this gap in the literature. We find that the Top Five has a large impact on tenure decisions within the top 35 US departments of economics, dwarfing the impact of publications in non-Top Five journals. A survey of current tenure-track faculty hired by the top 50 US economics departments confirms the Top Five’s outsize influence.

There are many consequences of the discipline’s reliance on the Top Five. It subverts the essential process of assessing and rewarding original research. Using the Top Five to screen the next generation of economists incentivises professional incest and creates clientele effects whereby career-oriented authors appeal to the tastes of editors and biases of journals. It diverts their attention away from basic research toward strategising about formats, lines of research, and favoured topics of journal editors, many with long tenures. It raises the entry costs for new ideas and persons outside the orbits of the journals and their editors. An over-emphasis on Top Five publications perversely incentivises scholars to pursue follow-up and replication work at the expense of creative pioneering research, since follow-up work is easier to judge, is more likely to result in clean publishable results, and is hence more likely to be published.2 This behaviour is consistent with basic common sense: you get what you incentivise.

In light of the many adverse and potentially severe consequences associated with current practices, we believe that it is unwise for the discipline to continue using publication in the Top Five as a measure of research achievement and as a predictor of future scholarly potential. The call to abandon the use of measures of journal influence in career advancement decisions has already gained momentum in the sciences. As of the time of the writing of this column, 667 organisations and 13,019 individuals have signed the San Francisco Declaration of Research Assessment, a declaration denouncing the use of journal metrics in hiring, career advancement, and funding decisions within the sciences.3 Economists should take heed of these actions. We provide suggestions for change in the concluding portion of this column.

Documenting the Power of the Top Five

We find strong evidence of the influence of the Top Five. Without doubt, publication in the Top Five is a powerful determinant of tenure and promotion in academic economics. We analyse longitudinal data on employment and publication histories for tenure-track faculty hired by the top 35 US economics department between 1996 and 2010. We find that Top Five publications greatly increase the probability of receiving tenure during the first spell of tenure-track employment (see Figure 1). This is true if we limit samples to the first seven years of employment. Estimates from duration analyses of time to tenure show that publishingthree Top Five articles is associated with a 370% increase in the rate of receiving tenure, compared to candidates with similar levels of publication in non-Top Five journals. The estimated effects of publication in non-Top Five journals pale in comparison. 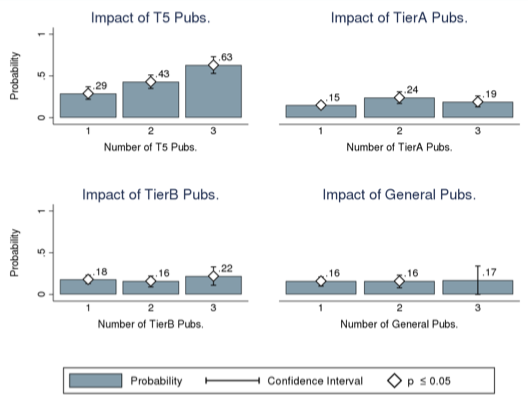 Notes: The figures plot the predicted probabilities associated with different levels of publications by authors in different journal categories, where the predictions are obtained from a logit model. White diamonds on the bars indicate that the prediction is significantly different than zero at the 5% level.

A survey of current assistant and associate professors hired by the top 50 US economics departments corroborates these findings. On average, junior faculty rank Top Five publications as being the single most influential determinant of tenure and promotion outcomes (see Figure 2).4 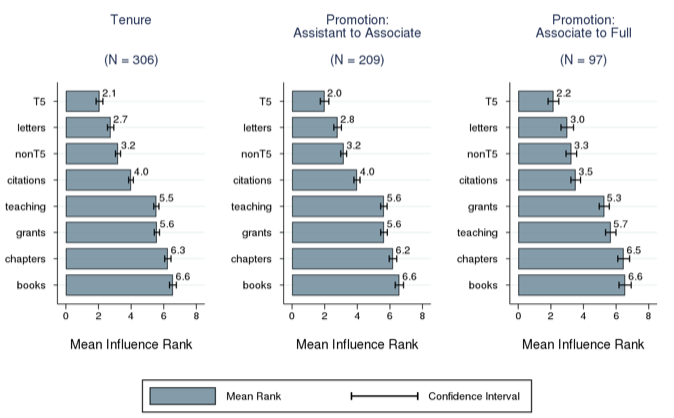 Responses to our survey reveal a widespread belief among junior faculty that the effect of the Top Five on career advancement operates independently of differences in article quality. To separate quality effects from a Top Five placement effect, we ask respondents to report the probability that their department awards tenure or promotion to an individual with Top Five publications compared to an individual identical to the first individual in every way except that he/she has published the same number and quality of articles in non-Top Five journals. If the Top Five influence operates solely through differences in article impact and quality, the expected reported probability would be 0.5. The results in Figure 3 show large and statistically significant deviations from 0.5 in favour of Top Five publication. On average, respondents from top 10 departments believe that the Top Five candidate would receive tenure with a probability of 0.89. The mean probability increases slightly for lower-ranked departments. 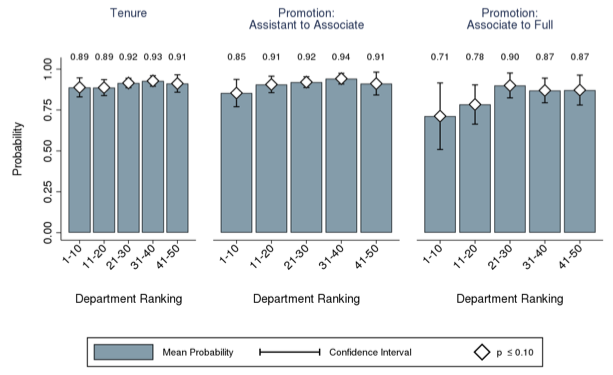 Notes: The figure summarises respondents’ perceptions about the probability that a candidate with Top Five publications is granted tenure or promotion by the respondent’s department instead of a candidate with non-Top Five publications, ceteris paribus. Responses are summarised by type of career advancement: tenure receipt, promotion to assistant professor, and promotion to associate professor. The bars present mean responses for each performance area. White diamonds indicate that the mean response is significantly different than 50% at the 10% level.

The Top Five as a Filter of Quality

The current practice of relying on the Top Five has weak empirical support if judged by its ability to produce impactful papers as measured by citation counts. Extending the citation analysis of Hamermesh (2018), we find considerable heterogeneity in citations within journals and overlap in citations across Top Five and non-Top Five journals (see Figure 4). Moreover, the overlap increases considerably when one compares non-Top Five journals to the less-cited Top Five journals. For instance, while the median Review of Economics and Statisticsarticle ranks in the 38thpercentile of the overall Top Five citation distribution, the same article outranks the median-cited article in the combined Journal of Political Economyand Review of Economic Studies distributions. 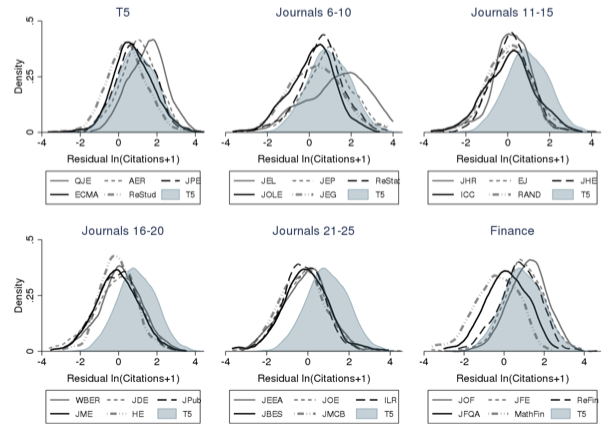 Restricting the citation analysis to the top of the citation distribution produces the same conclusion. Among the top 1% most-cited articles in our citations database,5 13.6% were published by three non-Top Five journals.6 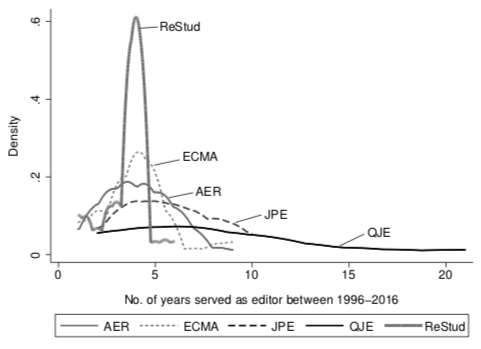 Compounding the privately rational incentive to curry favour with editors is the phenomenon of longevity of editorial terms, especially at house journals (see Figure 5). Low turnover in editorial boards creates the possibility of clientele effects surrounding both journals and their editors. We corroborate the literature that documents the inbred nature of economics publishing (Laband and Piette 1994, Brogaard et al. 2014, Colussi 2018) by estimating incest coefficients that quantify the degree of inbreeding in Top Five publications. We show that network effects are empirically important – editors are likely to select the papers of those they know.7

Table 1 Incest coefficients: Publications in Top Five between 2000 and 2016, by author affiliation listed during publication 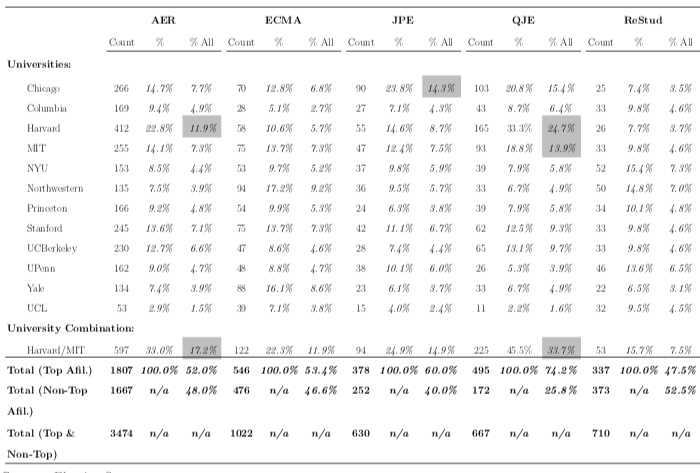 Reliance on the Top Five as a screening device raises serious concerns. Our findings should spark a serious conversation in the economics profession about developing implementable alternatives for judging the quality of research. Such solutions necessarily de-emphasise the role of the Top Five in tenure and promotion decisions, and redistribute the signalling function more broadly across a range of high-quality journals.

However, a proper solution to the tyranny will likely involve more than a simple redefinition of the Top Five to include a handful of additional influential journals. A better solution will need to address the flaw that is inherent in the practice of judging a scholar’s potential for innovative work based on a track record of publications in a handful of select journals. The appropriate solution requires a significant shift from the current publications-based system of deciding tenure to a system that emphasises departmental peer review of a candidate’s work. Such a system would give serious consideration to unpublished working papers and to the quality and integrity of a scholar’s work. By closely reading published and unpublished papers rather than counting placements of publications, departments would signal that they both acknowledge and adequately account for the greater risk associated with scholars working at the frontiers of the discipline.

A more radical proposal would be to shift publication away from the current journal system with its long delays in refereeing and publication and possibility for incest and favouritism, towards an open source arXiv or PLOS ONE format.8 Such formats facilitate the dissemination rate of new ideas and provide online real-time peer review for them. Discussion sessions would vet criticisms and provide both authors and their readers with different perspectives within much faster time frames. Shorter, more focused papers would stimulate dialogue and break editorial and journal monopolies. Ellison (2011 )notes that online publication is already being practiced by prominent scholars. Why not broaden the practice across the profession and encourage spirited dialogue and rapid dissemination of new ideas? This evolution has begun with a recently launched economics version of arXiv.

Under any event, the profession should reduce incentives for crass careerism and promote creative activity. Short tenure clocks and reliance on the Top Five to certify quality do just the opposite. In the long run, the profession will benefit from application of more creativity-sensitive screening of its next generation.