Yves here. The UK pres has been so full of baseless rumors, like that the EU would “offer” a Brexit extension, that it seemed clear that the notion of reopening the Good Friday Agreement, particularly with so little time left on the Brexit clock, was daft. However, given how many Brexit unicorns are still wandering about, the people that floated that rumor really could have seen messing with the Good Friday agreement as an option, or alternatively, it could have been members of the Government seeking to create the impression that Theresa May has more options than she really does.

But regardless, as readers have pointed out in comments, the Brexit negotiations have proven to be an ugly wake-up to the Irish as to the ugly views of some Brits who ought to know better.

By Peter Geoghegan, the investigations editor of openDemocracy’s main site. He can be found on Twitter @PeterKGeoghegan. Originally published at openDemocracy

The Good Friday Agreement was a marvel that is now threatened by the ignorant and the nasty among Britain’s ruling elite. 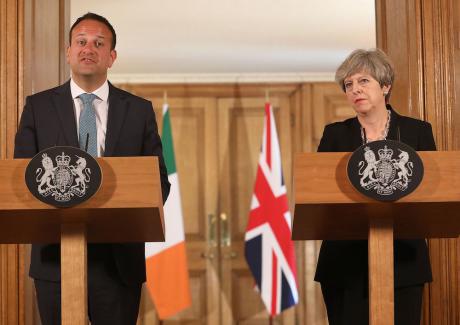 Theresa May and Taoiseach Leo Varadkar at a press conference in 2017. Image: PA

History,  Karl Marx famously quipped, repeats itself: first as tragedy, then as farce. That’s certainly true of Theresa May’s approach to Ireland. This past weekend began with a tragic misreading of Dublin’s position on Brexit– that London could somehow sign a bilateral deal with Dublin – and ended with farce: a proposal that the Good Friday Agreement could be “amended” to help the British prime minister’s deal pass the Westminster parliament.

May, The Daily Telegraphreports, wants to see the 1998 peace accord rewritten to assure Ireland that the UK is committed to maintaining no hard border after Brexit. Leaving aside the lack of faith many in Ireland have in the promises of a government propped up by the Democratic Unionist Party (DUP), which opposed the Good Friday Agreement in the first place, the very idea of rewriting the agreement attests to a much wider failure to understand the island, both north and south of the border.

The Good Friday Agreement effectively ended a conflict that cost more than 3,000 lives. Historic enemies agreed to share power and respect each other’s identities and beliefs. The genius of the agreement was compromise: everybody lost something, so everybody won something.

Brexit is the exact opposite of that irenic spirit. It is politics as zero-sum game: a victory for me means a defeat for you. This approach is damaging enough in Britain, but it is potentially disastrous across the Irish Sea.

Northern Ireland has been without a government for more than two years. This paralysis wasn’t caused by Brexit but the chaos in Westminster has clearly exacerbated tensions, reopening old questions about constitutional futures that the Good Friday Agreement had settled. A car bomb exploded in Derry on Saturday night. All this sententious talk of “sovereignty” can have very real effects in a divided society.

Brexiters like to point out that the agreement barely mentions the border. There are two good reasons for this: first an entire section of the accord, strand two, deals with north-south arrangements; second, in 1998, with Labour in power, nobody sitting around the table even considered the possibility of Brexit.

The UK government’s failure to appreciate this complexity was exemplified by David Davis during a recent sitting of the European Union scrutiny committee last week. Without a word of apology, the man at least nominally in charge of the Brexit process for two years told MPs that the government has had a “blind spot” when it comes to Brexit and Ireland. Yes, it is easy to miss a 310-mile-long land border. Troubles? What Troubles?

With hindsight, Davis said, Number 10 should have put more resources into what used to be called ‘the Irish question’ back when it divided the Tory party in the 19th century. But it was not all his fault. Britain had been “unpredictably handicapped”. Ireland had changed Taoiseach. The power-sharing government in Belfast had collapsed.

Yep, that’s right. If only Leo Varadkar hadn’t come along, pursuing the exact same Brexit strategy as his predecessor Enda Kenny. If only the Northern Ireland Executive was still up and running.

Blaming the Irish for Britain’s chaos has become a popular pastime for many on the Tory right. “Leo shut your gob,” demanded The Sunlast year. Perfidious Paddy is widely seen as standing in the way of the great British Brexit.

But what lies behind this caricature? Is it simple ignorance of Ireland, a failure to grasp that Irish interests are no longer directly aligned with that of the old colonial master? Or is there something more malign?

Just weeks after the Brexit vote David Davis – him again – told journalists that the UK had an “internal border” with Ireland. Only after becoming Northern Ireland minister did Karen Bradley discover that nationalists and unionists tend to vote for parties that share their views on the constitution. She is 48 years old.

But such comments speak more of witlessness than mendacity. It is the Irish backstop – the Brexiters’ bete noire – that has brought out the nastier side of Britain’s ruling elite when it comes to Ireland. An arrangement for avoiding customs check on the Irish border has been reframed as a Machiavellian plot to carve up Theresa May’s “precious union”, hatched by Brussels bureaucrats and irredentists in Dublin.

That many of the proposed checks already take place does not seem to matter. Listening to many Tory MPs, and to some journalists, it often seems that understanding of what the benighted backstop actually means is pretty thin on the ground in the Westminster village.

The failure to grasp the realities of everyday life in the shadows of what Winston Churchill disdainfully dismissed as the “dreary steeples of Fermanagh and Tyrone” is hardly surprising. Northern Ireland voted to remain in the EU, yet the only voice we hear from Belfast is the DUP’s.

The unionists’ putative leader, Arlene Foster, blithely declared last week that there never was a hard border in Ireland. I was surprised by that. Growing up 40 miles south of the border, on shopping trips to Enniskillen we used to pass checkpoints armed by callow squaddies touting rifles. Maybe I am suffering from false memory syndrome.

The border has changed, of course. Theresa May has repeated ad nauseam that there will be “no return to the borders of the past”. I hope she is right. Beyond dissident republican splinter groups, nobody wants to see a return to barbed wire and bombed-out roads.

But what has Britain’s existential crisis done to the borders of the mind?

I’ve lived in the UK for over a decade, one of hundreds of thousands of Irish people to carve out lives in our own near abroad. But even before I moved to Edinburgh to study I was inculcated in British culture: we grew up watching the BBC, supporting English football teams. I have clearer memories of Tony Blair’s first general election victory than of any of Bertie Ahern and Fianna Fáil’s succession of triumphs.

In my lifetime, Ireland has come to feel at ease with Britain, which is often a synonym for England. As Fintan O’Toole notes in his excellent new Brexit book, Heroic Failure, over the past two decades Anglo-Irish relations “finally evolved to be nicely boring. The sharing of a small space in a big world has become as normal as it should be. To each other, the English and the Irish were no big deal.”

No wonder my generation of Irish immigrants found it so easy to settle in Britain. There was no discrimination to be faced. No racist signs in boarding-house windows. We came to this country as equals. Or so we thought.

Brexit has revealed that some of our neighbours have a very different view of us. Paddy the fifth column. Untrustworthy, even traitorous. Maybe this minority was always there, just hidden. Or perhaps, it has been recreated afresh by a national persecution complex that has taken hold in some quarters.

And yet Britain’s relationship with Ireland points the way out of the current mess in Westminster. Perhaps we are too blunted by familiarity with the Good Friday Agreement to realise how remarkable it is. Three decades of violence ended by dialogue and compromise.

But many Conservatives, particularly in both the pro-Brexit European Research Group, as well as the DUP would happily see the agreement picked apart. Michael Gove compared the Good Friday Agreement to condoning the desires of paedophiles. This weekend’s kite-flying about “amending” the agreement is not just dangerous, it also shows that the British government could be led by its most primitive passions, which could have serious consequences across these islands.