By Konstantinos Efstathiou, as Affiliate Fellow at Bruegel. Originally published at Bruegel 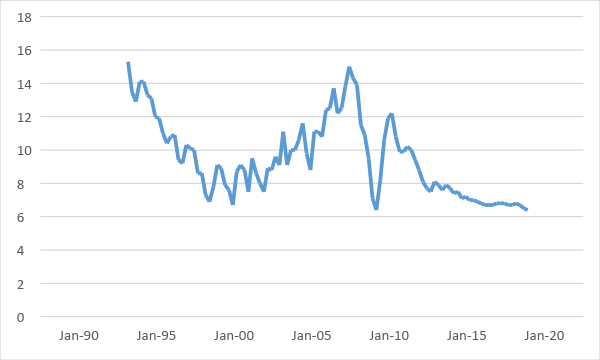 Although there was no revision for China, the IMF cut its forecast for global growth, while Gita Gopinath, the IMF’s new chief economist, warns that “risks to more significant downward corrections are rising”, including the possibility that Chinese growth slows down faster than expected. 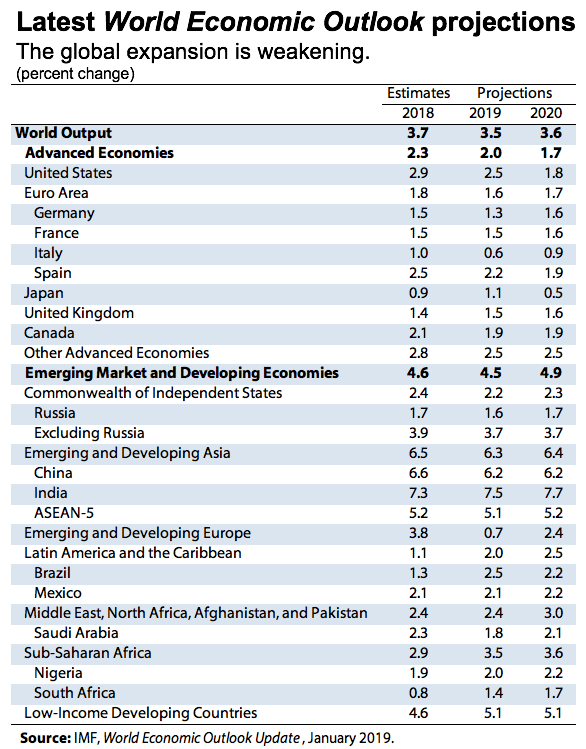 Although there is a consensus among commentators that slower growth is hardly surprising, they also agree that there is more than meets the eye when it comes to Chinese growth.

The first concern is that the actual situation on the ground is worse than the GDP numbers let on. Michael Pettis at Carnegie Endowment for International Peace subscribes to this view. He argues that true growth may be as low as half of what is reported, but he puts forward three distinct reasons as to why there might be such a discrepancy.

The first two are not limited to, though remain particularly relevant for, China: GDP may be doing a poor job at capturing the creation of real economic value, or the reported numbers may not be accurate. But, Pettis argues, the third reason is far more worrying: GDP growth is an input to the Chinese economic system – as in, a target set at the central-government level well ahead of time – rather than the output. Then several actors, such as local governments, engage in the spending and borrowing required to achieve the target.

As long as this economic activity is productive, as Pettis claims was the case until a decade or so ago, it is a non-issue. Even if it is not productive, however, China can continue to hit any GDP targets it sets, provided that it doesn’t face hard budget constraints and avoids a write-off of the resulting bad debt. The difference is that GDP ceases to be informative about the economy’s health or performance. Pettis’ point is, therefore, that one should worry less about the reported growth numbers and more about the financial risks that have built up as a result of unproductive investment.

Indeed, Colby Smith in FT Alphaville documents how, after the global financial crisis, China’s domestic leverage increased substantially (see Figure 2). The column notes that the rapid increase in debt fuelled an investment boom that supported, in the words of former premier Wen Jiabao, economic growth that is “unstable, unbalanced, uncoordinated and unsustainable”. 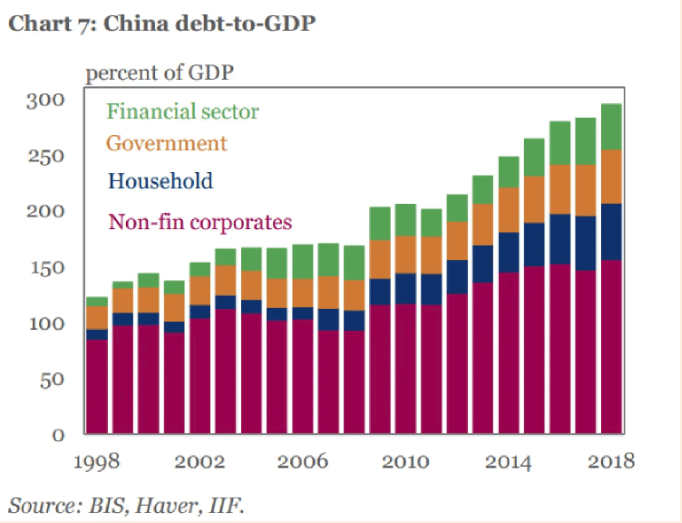 This highlights the chief concern about Chinese growth – namely,- that it is unbalanced, relying too much on investment and too little on consumption. With investment at 43% of GDP and private consumption at 38%, China is an outlier by global standards (the world average for consumption is 60% of GDP) and the progress it has made towards rebalancing since 2011 is small (see Figure 3). Citing the IMF, Smith points out that China’s per-capita GDP is comparable to Brazil’s, but its consumption per capita is analogous to Nigeria’s; if China were to consume like Brazil, its level of consumption would have to double. 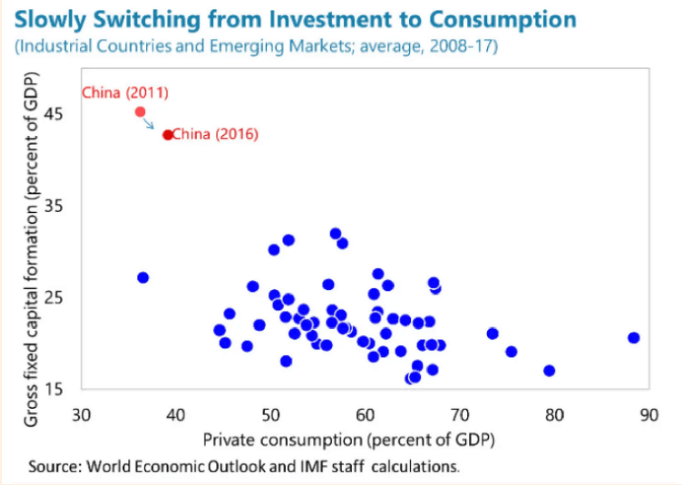 Paul Krugman remarks that at such high investment levels, diminishing returns are bound to kick in. Although high investment rates can be sustained for a long time in a rapidly growing economy, the potential for future growth in China has diminished for two reasons: technology has converged to that of other advanced countries, and the working-age population has stopped growing. Yet, Krugman writes, Chinese policymakers seem to be doubling down on supporting investment, instead of rebalancing the economy towards higher domestic consumption, for instance by returning profits from state-owned enterprises to the public and strengthening the social safety net.

Why is that? Chinese policymakers face a trade-off, says George Magnus, former senior adviser to UBS and the author of ‘Red Flags: Why Xi’s China is in Jeopardy’ (per Colby Smith’s Alphaville piece). Decreasing the pace of credit growth to rebalance the economy renders the high-growth-rate objectives of Chinese officials harder to achieve. But Magnus says that, so far, Chinese economic policymakers have tried to meet both ends, thus working at cross-purposes and risking the failure of both aims. Put another way, infrastructure spending, liquidity injections in the financial system, cutting the reserve requirement, and asking banks to lend more to private and small companies all contradicts the calls to banks to raise more capital and keep an eye on their bad debts.

Conversely, in his Project Syndicate piece Yu Yongding does not walk the line and strongly advocates monetary and fiscal expansion. Macroeconomic stimulus may not address China’s long-term problems, he argues, but slower growth is the biggest risk China faces, endangering its economic, financial, and social stability. In Yongding’s view, with inflation running at only 2%, tightening monetary policy to achieve other objectives, such as managing the exchange rate or containing house-price increases, would do more harm than good.

On the issue of rising house prices, Yongding dismisses the view that they are caused by central-bank policy, but reverses that logic and advocates for fiscal instruments to address the matter. Noting that house prices have been on a rise that predates any monetary stimulus, Yongding believes that it is exactly the absorption of liquidity by the residential sector that creates the need for further injection in order to support the rest of the economy.

He also adds that China has the fiscal space, even after considering contingent liabilities such as local government debt, to reverse the slowdown in infrastructure investment, the basic driver of lower growth. To enhance the efficiency of infrastructure projects, Yongding argues for funding projects through the central government rather than leaving it up to borrowing by local governments.

Rather than the short-term ramifications, Jim O’Neill considers the long-term implications of China’s rebalancing. O’Neill draws from Apple’s letter to its shareholders that cuts its Q1 2019 revenue forecast and cites the economic slowdown in China. His premise is that Chinese consumption has driven global growth during the past decade and it has become a major market for companies like Apple.

O’Neill wonders what it would mean for the global economy if these assumptions do not come to pass, and concludes that no country, advanced or emerging, could fill the consumption void China would create. The US may be one exception, but O’Neill is sceptical about the ability of the US consumer to step up in light of vulnerabilities caused by inflation, higher borrowing costs and pressures on the US increase savings.

Like Krugman, O’Neill proposes more direct fiscal support but also the reform of the hukou (household registration) system. In his view, the economic security generated by such reform for migrant workers from the country’s rural areas, would enable this important part of China’s population to save less and consume more.

Perhaps the most striking statement made by O’Neill is that “a sustained decline in Chinese consumption would be even more worrying than the current US-China trade dispute”. This sense that a Chinese slowdown is imminent and its impact may prove devastating is echoed by the other pieces reviewed here. But as Krugman writes, “the other day I issued a warning about the Chinese economy… unfortunately, the other day was six years ago”. And given the abundance of policy recommendations, China still appears to have a number of options to deal with its growth problem.