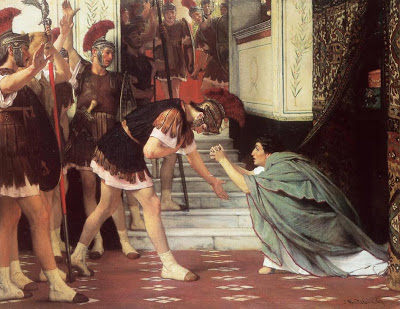 I’d argue that under Trump, the national security establishment not only hasn’t missed a beat but indeed has gained dangerous strength. Now it is ever more autonomous and practically impervious to criticism.
—William Arkin, former NBC war reporter

File this under “Praetorian Guard Watch.”

William Arkin is a longtime NBC reporter, primarily covering war and national security news. He recently quit NBC, offering his reasons in an online “departure letter.” There he castigated the media’s coverage of the president, calling them at one point “prisoners of Donald Trump.”

“Of course he is an ignorant and incompetent impostor,” Arkin wrote. “And yet I’m alarmed at how quick NBC is to mechanically argue the contrary, to be in favor of policies that just spell more conflict and more war. Really? We shouldn’t get out Syria? We shouldn’t go for the bold move of denuclearizing the Korean peninsula? Even on Russia, though we should be concerned about the brittleness of our democracy that it is so vulnerable to manipulation, do we really earn for the Cold War? And don’t even get me started with the FBI: What? We now lionize this historically destructive institution?”

Please notice the last sentences above, about the growth in reputation — and irreproachability — of the national security state: “And don’t even get me started with the FBI: What? We now lionize this historically destructive institution?”

Then he gave an interview to Democracy Now‘s Amy Goodman. Part of that interview went this way (emphasis mine throughout):

AMY GOODMAN: So, you talked about the people who populate the networks as pundits, and you’ve been a fierce critic of the national security state, or at least understanding who it is who is explaining things to us.

Reading from Politico, “Former CIA Director John Brennan … the latest superspook,” they said, “to be reborn as a TV newsie. He just cashed in at NBC News as a ‘senior national security and intelligence analyst’ and served his first expert views … on Meet the Press. The Brennan acquisition seeks to elevate NBC to spook parity with CNN, which employs former Director of National Intelligence James Clapper and former CIADirector Michael Hayden in a similar capacity.

And it goes on and on and on. These are now the pundits. And so, when you have a situation like President Trump announcing he will immediately withdraw U.S. troops from Syria and halve the troops that are in Afghanistan, you have this massive attack on him that’s actually led by the permanent national security state under the guise of pundits on television.

At this point Arkin is selling the idea, with which I agree, that the security state has become so powerful that it’s able to use the news networks, who compete for “spook parity,” as their sales platforms.

But in doing so, he’s making another point as well, if not mindfully — that the national security state is approaching (or has approached) the status of a latter-day Praetorian Guard, a military organization without whose approval no one can become or remain president.

He gets there in stages. First, this:

WILLIAM ARKIN: Well, I think that you’ve—I mean, what you said stands for itself, Amy. But I would add to it that I think the real crisis is that when we have a panel discussion on television, in the mainstream press, and even in the mainstream newspapers, we don’t populate that panel with people who are in opposition. We have a single war party in the United States, and it’s the only one that is given voice. …

And I think that probably because of the phenomenon of Donald Trump—let’s just be honest about it—really what we see on TV now is former Obama administration officials masquerading as analysts who are nonpartisan, when in fact they are partisan.

Brennan, Clapper (he who lied to Congress but, as an approved insider, was forgiven), and a number of other “former Obama administration officials” are not just partisan, pro-endless war advocates “masquerading as analysts”; they are “analysts” working to delegitimize Donald Trump. Whether not Trump is a legitimate president, that “partisan superspooks” are uncritically accepted as part of the takedown operation should be concerning.

Arkin seems to recognize this. Later in the interview he’s asked to explain his comment about the FBI, which I noted above.

AMY GOODMAN: And, William Arkin, you also write, “don’t [even] get me started with the FBI: What? We now lionize this historically destructive institution?”

WILLIAM ARKIN: Well, there’s a crazy collateral damage of Donald Trump. And that is that there are a lot of liberals in America who believe that the CIA and the FBI is going to somehow save the country from Donald Trump.

Well, I’m sorry, I’m not a particular fan of either the CIA or the FBI. And the FBI, in particular, has a deplorable record in American society, from Martin Luther King and the peace movements of the 1960s all the way up through Wen Ho Lee and others who have been persecuted by the FBI.

And there’s no real evidence that the FBI is either—is that competent of an institution, to begin with, in terms of even pursuing the prosecutions that it’s pursuing. But yet we lionize them. We hold them up on a pedestal, that somehow they are the truth tellers, that they’re the ones who are getting to the bottom of things, when there’s just no evidence that that’s the case.

AMY GOODMAN: And what do you mean by the “creeping fascism of homeland security”?

WILLIAM ARKIN: You know, I was against the creation of the Homeland Security Department in 2003, to begin with. First of all, don’t like the word. “Homeland security” sounds a little bit brown-shirty to me. But, second of all, it was created to be a counterterrorist organization, a domestic counterterrorist organization. And all during the Obama administration, we heard Janet Napolitano, the secretary of homeland security, saying, “You know, we are counterterrorism.” But since then, we’ve seen they’re creeping into cybersecurity. We’ve seen them creeping into election security. We’ve seen ICE and TSA become the second and third largest federal law enforcement agencies in the country. And so, now homeland security sort of has become a domestic intelligence agency with really an unclear remit, really with broad powers that we don’t fully understand.

I’d like you to ask yourself this. If a President Bernie Sanders wanted better relations with Russia and North Korea, and went about it in a smart, safe way; wanted to bring manufacturing back to the U.S. by smartly but radically renegotiating our billionaire- and corporate-friendly trade deals; wanted to radically reduce spending on the national security apparatus, on our endless wars, and spend instead on government-provided services like Medicare for All (which, by the way, would devastate several powerful, well-funded industries and bipartisan donor constituencies) … and for good measure, started jailing bankers again…

…if a President Sanders attempted to do all that, what would be the response of the national security apparatus, guardians of the status quo? Whom would they serve, the billionaire owners of the established, corrupt-but-lucrative bipartisan state, or the Sanders-led revolutionary FDR-style government they’re constitutionally sworn to defend?

As a reminder: The Praetorian Guard was an elite unit of the Imperial Roman army whose members served as personal bodyguards to the Roman emperors. … [T]he Guard became notable for its intrigue and interference in Roman politics, to the point of overthrowing emperors and proclaiming their successors. In 312, the Guard was disbanded by Constantine the Great [after defeating them and their latest declared emperor at the Battle of the Milvian Bridge].

The Guard murdered Caligula — insane, incompetent and dangerous — and declared Claudius emperor, the first of its many “interferences.” After Claudius was poisoned, they transferred allegiance to Nero. It went like this for centuries (of which we have none, by the way).

The Guard had the power to “make or break emperors.” Are we growing our own Praetorian Guard, or giving them leave to grow, under cover of their anti-Trump “resistance”? If I were one of the national security superspooks, I’d want nothing better than to be welcomed — and washed clean — by acceptance into that well-praised effort. Doors would open publicly that before were open only in secret.

In that sense, Trump may be even more dangerous than he’s now considered to be. What he may do while still with us may be frightful to consider. But the form of government he leaves behind may be worse, especially if he cements in the public mind the rightness of superspooks acting as new-minted kingmakers. Sanders supporters, take note.