Jerri-Lynn here.  This piece documents how closely business interests groups – in this case, oil refiners – worked to rollback fuel economy emissions standards, by flooding the Department of Transportation with identical  public comments as the agency considered the proposed rule change, and  soliciting Republican governors to front for their propaganda campaign.

By Ben Jervey,who has been covering and working in the climate, energy, and environmental fields for a decade. He is regular contributor to DeSmogBlog. He was the original Environment Editor for GOOD Magazine, and contributes to National Geographic News, Grist, OnEarth Magazine, and many other online and print publications. His book–The Big Green Apple: Your Guide to Eco-Friendly Living in New York City–has been called the “bible of green living for NYC.”Originally published at DeSmog Blog

As the Trump administration worked to revise and relax federal fuel economy and emissions standards for cars and light trucks, an oil refiners trade group worked connections with Republican governors to rally support for the proposed rollback.

A blockbuster New York Times investigation published in December revealed how AFPM, using a front group called Energy4US, deployed Facebook advertisements to prompt thousands of identical public comments filed in the Federal Register supporting the proposed rule. An earlier article on the Facebook ads by ProPublica had linked AFPM to Energy4US, and researchers at DeSmog’s KochvsClean had since connected the front group to more than one-quarter of all public comments that the Department of Transportation (DOT) had received on the proposed rule, while also revealing that the Consumer Energy Alliance was connected to the campaign.

In addition to the more than 3,000 identical comments, the emails obtained by Documented through a number of state open records requests revealed a much broader influence campaign.

Email messages show AFPM representatives reaching out to the staff of Republican governors, soliciting signatures for a formal letter that was eventually submitted to the Department of Transportation and the Environmental Protection Agency (EPA). In another email, AFPM’s Senior Vice President of Federal and Regulatory Affairs shared a pre-written draft of an op-ed with the Wyoming Governor’s office, asking if Governor Matt Mead would consider putting his name on it. How AFPM Rallied Republican Governors to Support the Rollback

AFPM deployed the corporate-backed Republican Governors Association (RGA) and their policy arm, the Republican Governors Public Policy Committee (RGPPC), which helped circulate the letter. AFPM contributed more than $200,000 to RGA during the 2018 election cycle, according to IRS filings.

“Brian Sanderson, the Policy Director with the RGA, has been circulating the letter as well as informational materials to Governors across the country for review. I wanted to reach out to offer to answer any questions and ask for Governor Martinez to consider joining the attached letter,” AFPM’s manager of state and local outreach Peter Barnes wrote in an email to Keith Gardner, chief of staff to New Mexico Governor Martinez. Barnes wrote an identical message asking for support from Mississippi Governor Phil Bryant.

Eventually, governors from Texas, Kansas, Kentucky, Maine, Mississippi, Nebraska, North Dakota, and Oklahoma co-signed the letter, which was sent to the DOT and EPA on October 26, 2018, and subsequently added to the official rulemaking records.

The letter was initially spearheaded by Texas Governor Abbott, whose office sent AFPM talking points on the rule. A close reading of the documents obtained paints a picture of AFPM playing an instrumental role in the organization and dissemination of this governor’s letter to others.

AFPM Was Also ‘Shopping Around an Op-Ed’

Prior to submitting the letter in the Federal Register, AFPM also asked Republican governors to publish an op-ed supporting the rule. According to an internal memo for Wyoming Governor Matt Mead, AFPM had been “shopping around an op-ed” supporting the changes to fuel economy standards.

“The American Fuel and Petrochemical Manufacturers Association has been shopping around an op-ed which supports the changes and are requesting Governor’s [sic] to sign on (op-ed attached). So far, to my knowledge, the op-ed has been presented to you and the Governors of New Mexico and Nebraska,” the memo stated.

In an email correspondence from AFPM’s Senior Vice President of Federal and Regulatory Affairs, Derrick Morgan, to the Nebraska Governor’s office, also obtained by Documented, Morgan alleges that there was “initial interest from Governor Mead of Wyoming.”

“We put together a potential op-ed (draft attached) that will support what the Trump Administration is doing on fuel economy through the EPA and DOT,” Morgan stated in an email to Nebraska Governor Chief of Staff Matt Miltenberger. 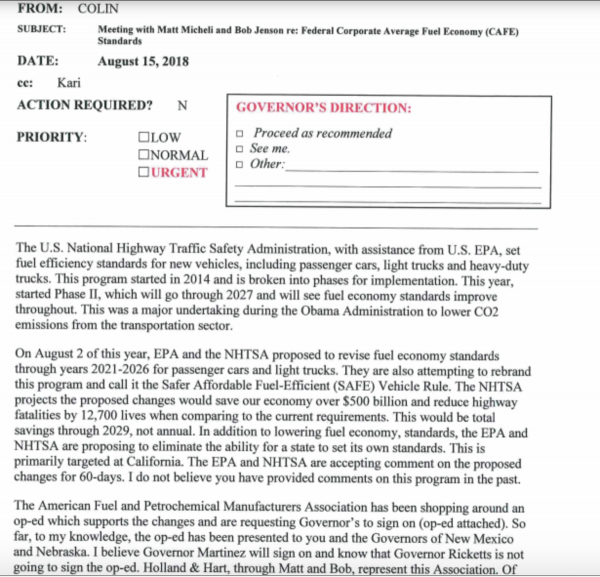 The governors ultimately passed on the opportunity to put their names on the op-ed, a decision that might have spared them considerable embarrassment, considering the source of much of the language of the draft.

The op-ed draft that was “shopped around” by the AFPM included many sentences lifted entirely from an April letter distributed by the American Energy Alliance (AEA), and which followed the same format as the original letter.

The AEA letter — also signed by representatives of 12 conservative free market groups, including Americans for Prosperity, the Competitive Enterprise Institute, and Americans for Tax Reform — featured sections describing the “fundamental problems” with the Obama-era clean car standards. The sections were titled: “cost to consumers,” “consumer choice,” “inefficiency,” and “It’s a relic.”

Within each of the mimicked sections, some phrases and sentences are reproduced verbatim from the AEA letter. For example, both texts include a slight variation on the line: “who should decide what cars and trucks you should buy, you and your family or unelected bureaucrats in Sacramento or Washington?” 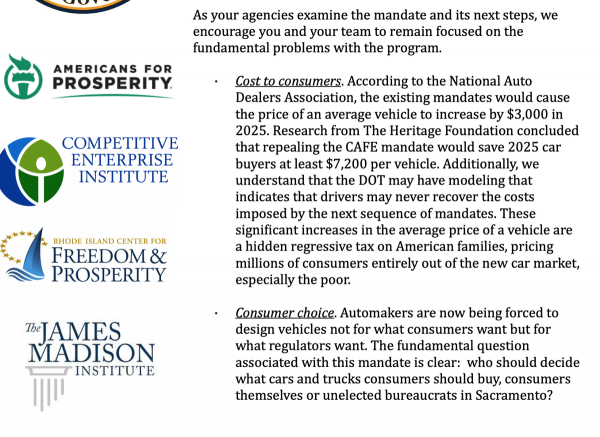 The draft op-ed “shopped around” by AFPM.

Both texts also include this often debunked statement: “According to the National Auto Dealers Association, the existing mandates would cause the price of an average vehicle to increase by $3,000 in 2025.”

There are plenty of other examples, which you can see for yourself by comparing the AEA letter with the AFPM draft op-ed.

AFPM has not responded to DeSmog’s questions about the provenance of the draft op-ed and if the group was actively working with the American Energy Alliance or others on this issue. So, it’s impossible to know whether the group was working in concert with AEA, or whether AFPM staff were simply lifting language from a fellow Koch-affiliated organization. Among other ties, AFPM has received funding from the Koch Industries PAC and has a past board member who worked for Koch Industries.