Although information technology has reshaped the way businesses operate, measuring IT capital in firms is challenging. Using an exceptionally rich firm-level dataset from Belgium, this column finds that large firms benefit more from IT than small firms, and that IT explains about 10% of the productivity dispersion. IT has contributed to Belgian GDP and productivity growth prior to the Global Crisis, but the recession seems to have led to firms to forego investment in IT. Achieving optimal IT investment levels could reinvigorate productivity growth.

The interest from economists and politicians in information technology (IT) is not new. However, opinions among economists about the importance of IT are divided. While Robert J. Gordon, macroeconomist and economic historian at Northwestern University, has been arguing against techno-optimism for a long time, MIT professors Erik Brynjolfsson and Andrew McAfee suggest in their recent book, The second machine age, that most of the productivity gains from IT are still to come. In our recent study (Dhyne et al. 2018), we provide new insights on the returns of IT by constructing firm-level IT capital stocks from an exceptionally rich data set of all Belgian business-to-business transaction data on IT purchases. This allows us to investigate which firms benefit most from IT. Furthermore, our work provides insights into the ‘Solow paradox’, which refers to the fact that we do not see much effect of IT on macroeconomic GDP growth. Since we use the universe of Belgian firms, we are able to show the micro channels of the aggregate impact of IT on macroeconomic productivity growth.

Large Firms Benefit More from IT

Do all firms benefit equally from IT, or do some benefit more than others? We show that for very small firms with fewer than five full-time employees, an increase of IT capital by 1% pushes the firm’s value added up by 0.08% on average. For firms with more than 250 employees, the impact is more than twice as high with an average increase in value added of 0.17%. We would therefore expect that large firms invest a larger share of their revenues in IT than small firms. However, it turns out that they do not, and consequently their return on IT is higher. Figure 1 shows the differences in the return of investing one additional euro in IT (the gross marginal product of IT capital) across the firm size distribution. Increasing the IT capital stock by €1 in very small firms with fewer than five full-time employees results in a €0.92 increase in value added. The same investment in firms with more than 250 employees has a €2.55 return.1 This suggests that there is an untapped potential for productivity growth by investing in IT, especially for large firms. As large firms employ about 40% of the working population, higher IT investments in large firms would also boost economy-wide productivity growth. 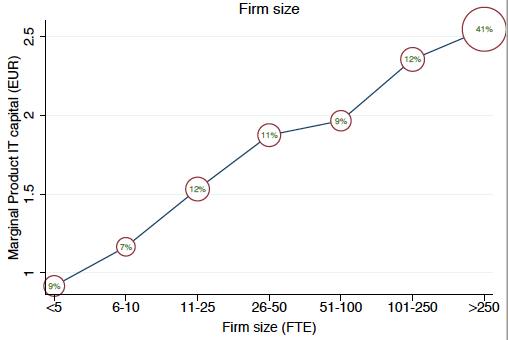 The Return on IT Depends on the Activity of the Firm

Another piece of the puzzle on the economy-wide impact of IT is understanding how the return varies across industries. Figure 2 displays the gross return of investing an additional euro in IT. The horizontal axis ranks the industries according to their productivity, expressed in value added per employee. 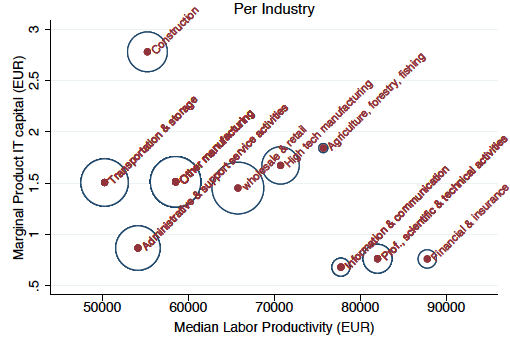 Underinvestment and Misallocation of Investments Explain (Part of) the Productivity Paradox

Next, we decompose GDP growth into primary input growth (capital and labour deepening) and productivity growth to assess the importance of IT capital at the macro level. 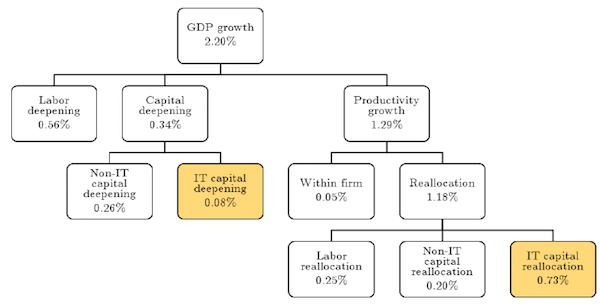 IT Explains 10% of the Productivity Dispersion across Firms

Figure 4 Productivity dispersion and IT intensity 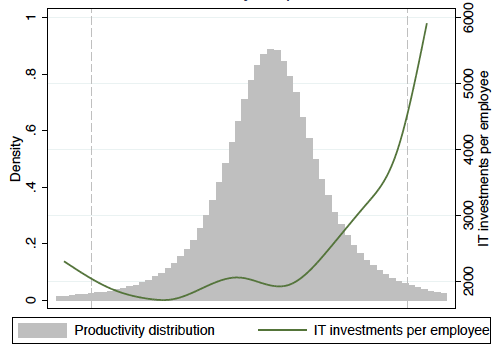 The key takeaway is that IT and the productivity of firms are very closely related. While all firms benefit from IT, it is the largest firms that benefit most. Furthermore, the gross marginal product of IT capital is relatively high, with €1.5 added value for €1 of extra investment in the majority of relatively low-productivity industries. When reconciling firm- and industry-level returns of IT investments with the growth of the Belgian economy, we find that IT did contribute to national GDP and productivity growth. However, this was only so until the Great Recession of 2008-2009. The recession seems to have had a scarring effect and resulted in firms foregoing investing in IT. The policy implication is that providing an economic environment which facilitates achieving optimal IT investment levels could help to invigorate productivity growth.