Yves here. Since the economists mentioned below got in quite a fistfight, I’ll only add one observation: the notion that higher taxes mean entrepreneurs would leave is nonsense. Starting a new business requires above all customers. A foreign transplant won’t have them and will be disadvantaged in acquiring them. And that’s before these pundits having no clue as to how hard an international move is when you don’t have an employer sponsoring it. Already rich people may give up their citizenship, but that’s a different category.

By Enrico Bergamini, Research Assistant at Bruegel, and previously a data science consultant for the NGO Action Aid. Originally published at Bruegel

During a panel at Davos, Dell founder Michael Dell was asked about his opinion on the proposal of a 70% top marginal tax rate; he replied: “Name a country where that has worked. Ever.”

Co-panelist Erik Brynjolfsson (MIT) names the United States, in between the 1930s and the 1960s, when the average top rate was higher than 70%, with peaks of 91%. 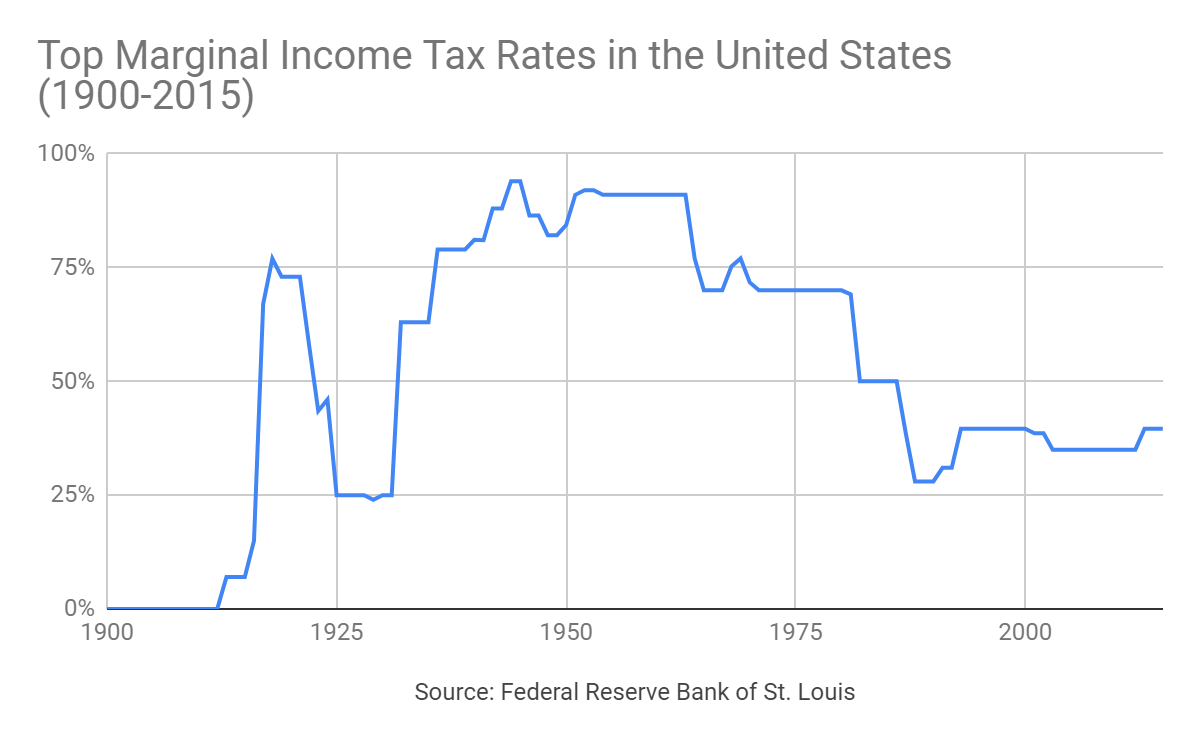 On January 4th, Alexandria Ocasio-Cortez – newly elected Congresswoman and rising star of the Democratic Party – proposed in an interview with 60 Minutes to raise the tax rate to 70% on incomes above $10 million.

The tax, she explained, is meant to finance her plan for a Green New Deal: an ambitious programme of investments in carbon-free infrastructures and jobs, across various sectors, in order to decarbonise the economy by 2030. Ocasio-Cortez argued that, if taken in a historical perspective, this is far from a radical idea. Under Dwight Eisenhower’s presidency in the 1950s, top marginal tax rates were as high as 91%, coming from the 73% of 1920 and still as high as 70% in 1980

This proposal kick-started a heated debate, not only about the technical calculations of top marginal tax rates but also on the progressivity of tax systems and the role of different economic policy instruments in fighting inequality.

For the Washington Post, Jeff Stein – with the help of tax experts such as Mark Mazur (Tax Policy Center), Joel Slemrod (University of Michigan) and Ernie Tedeschi (Treasury Department of Obama’s White House) – tries to assess the implications of this tax policy.

Mazur calculates that it could raise $720 billion over the next decade, affecting 0.05% of the US population (around 16,000 households), although the estimate is likely to be much smaller because of the changing behaviour of the millionaires.

Paul Krugman steps into the debate in a New York Times op-ed, reframing Ocasio-Cortez’s proposal not as a radical socialist idea, but as an economically sound proposal, even moderate if viewed from a historical perspective.

Krugman quotes the Diamond-Saez (2011) calculation of the 73% optimal top marginal tax rate, as well as the ideal rate found by Romer & Romer(2011), which was higher than 80%. He challenges the Republican trickle-down arguments for tax cuts as based “on research by … well, nobody”, showing a non-negative correlation between economic growth and top marginal tax rates.

But what would be the economic justification for high top marginal income rates? Krugman builds the argument on diminishing marginal utilities and competitive markets. The former imply that an extra dollar of income is more useful to low-income families than to richer ones.

If each agent is paid her marginal utility, marginal top tax rates could even, theoretically, be up to 100%. The obvious tradeoff is that this would totally eliminate any incentive to work more, and hurt economic growth and innovation.

However, in case of non-perfectly competitive markets, where market failures such as monopolies and rents are present, the optimal marginal tax rate that maximises social benefits and aggregate welfare can be quite high.

John Cochrane replies to Krugman’s arguments by pointing out that the 70% calculations are based on arbitrary assumptions, and that Mirrlees (1971) calculates an optimal rate of 0% starting from different assumptions.

Cochrane writes that Saez-Diamond calculations do not include federal and local state taxes, and that the ‘disincentive’ argument does not account for human capital decisions that individuals might take: “And, like the decision to relocate, it depends on the total tax bite, not just the marginal tax bite. How much will I earn, after all taxes – what lifestyle will I lead – if I go to med school, or just stay where I am?”

Clive Crook, on Bloomberg, highlights the technical difficulties of calculating optimal tax rates, drawing attention to the fact that Saez & Zucman (2011) estimate a range between 48-76% where the optimal tax rate might lie. Also, Crook argues that, economically, it is a very questionable proposal; the risk is that the most successful entrepreneurs would emigrate, which would have costs higher than a loss of tax revenue.

But what Crook finds as the main problem with social-welfare-maximising policies is that, by grounding arguments in diminishing marginal utilities, they ignore questions of justice and liberty: “Whether some of the rich might deserve to be rich because of the work they’ve done, the risks they’ve taken, or the ideas they’ve come up with is irrelevant.”

Garrett Watson, at the Tax Foundation, underlines the risk that innovation processes will be hampered by higher marginal tax rates, quoting empirical evidence from a 2018 working paper by Charles Jones.

By contrast, Pasi Kuoppamäki, chief economist of Danske Bank A/S’s Finland branch, writes on the Hill that Nordic countries – although each helped by having a smaller population – have been able to make high taxation work well without harming innovation or incentives to work, while providing comprehensive welfare policies.

On Bloomberg, Noah Smith also endorses the proposal as “far from radical[,] and economically well-grounded”. And further, the key issue in his view is to go beyond this plan and reform the corporate and capital-gains tax systems, enlarging the base of high earners, and probably using wealth taxes.

Tyler Cowen, Michael Strain and Karl Smith join in a debate with Noah Smith on the economics of Ocasio-Cortez’s plan for a top marginal tax rate. They express several concerns about the effectiveness of such a plan in fighting inequality, a plan that would foster tax avoidance schemes and hamper innovation processes. Karl Smith points out: “What makes these systems redistributive is not punitive tax rates on the rich, but broad-based taxes that are used to fund a universal basic income for everyone.”

On avoidance, Aparna Mathur (American Enterprise Institute) explained that elasticities of high-income individuals, that have a much higher capacity to avoid taxes, would result in a government revenue 27.8% lower than the calculations made in a static scenario.

She proposes alternative solutions, such as an X tax – as suggested by Carroll and Viard (2012) – that would distort incentives less, or a carbon tax that also would also entail redistributive mechanisms (a point elaborated upon in a recent Bruegel Blueprint, written by Grégory Claeys, Gustav Fredriksson and Georg Zachmann)

The Bloomberg editorial board argued that Ocasio-Cortez’s idea is unwise, but worth discussing: Since the revenue needs of the government will rise in the future, both for social-security spending and for tackling climate change, they suggest to focus on closing loopholes and broadening the tax base before raising the rates.

Emmanuel Saez and Gabriel Zucman, of the University of California and Berkeley, address these concerns in an op-ed for the New York Times.They reply to the objections, showing that high top marginal tax rates are not correlated with slower economic growth (not only in the United States=, but also in Japan between 1950 and 1982).

In their view, proposals like Ocasio-Cortez’s have more to do with preserving a Japan-style liberal democracy, rather than paving the way for authoritarian reactions that result from years of negative income growth rates for a large part of the population.

If the concentration of incomes at the top coincides with concentration of power, higher tax rates are meant to shelter society from the dangers of plutocracy more than to finance investment plans or the welfare state.

This op-ed raised many reactions both from the left and from the right. Greg Mankiw criticised the political argument by commenting that most of the people that are earning high incomes earned their wealth honestly and have less political influence than commonly thought.

Chris Dillow, from a Marxist perspective, argues that the excessive political influence of the rich cannot be solved by a socialist-democrat state intervention, which would be insufficient to mitigate the failures of capitalism.

The debate was pushed, two days later, by the proposal of a tax reform by the Democratic presidential candidate Elizabeth Warren. This plan would introduce a wealth tax on the ultra-rich, a novel element in the history of US tax system.

The proposal is based on an analysis by Saez and Zucman: a 2% tax on the wealth that exceeds 50 millions, and an additional surplus tax of 1% on households with a net worth of more than $1 billion. These taxes would raise, according to their calculations, $2.75 trillion for a 10-year timespan (1.0% of GDP per year), affecting 75,000 households – a group smaller than the 0.1%. According to Saez and Zucman, the ultra-rich tax would be able to raise $212 billion for 2019. 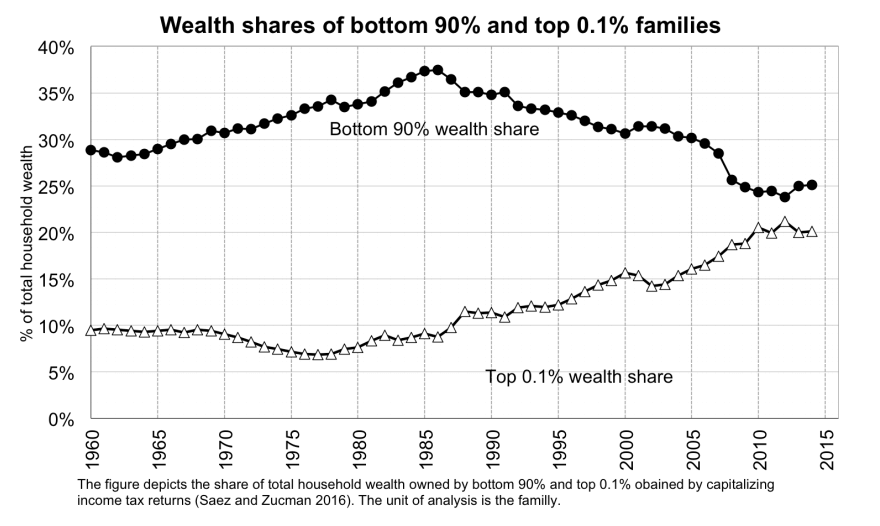 The revenue generated, Senator Warren explains in an interview, could be funneled into childcare and healthcare proposals, and to reduce student debt.

Yet the main objective, in the Senator’s words, is to help to level the power dynamics in Washington, reducing the amount of political influence that the economic elite can achieve: “It’s about making democracy work better, and it’s about making the economy work better… When you ask me about the centerpiece [of this proposal] it actually starts with an anti-corruption bill that tries to reduce the influence of money in Washington.”

Warren’s proposal was defended by noted tax experts and by Paul Krugman in the New York Times, arguing that, although radical, it would raise the average tax rates on the richest 0.1% to 48%, up from 36%.He added that it would be feasible – looking at Denmark and Sweden, where higher taxes did not lead to higher fiscal evasion – if adequately enforced.

On Bloomberg, while Noah Smith favoured a wealth tax meant to reduce income inequality as a better plan than many of the alternatives, Harvard’s law professor Noah Feldman expressed concerns as to the constitutionality of such a tax, shared by another candidate for the 2020 elections, Michael Bloomberg. As in the case of the Ocasio-Cortez proposal, many commentators put forward the argument that these type of taxes would hamper innovation and entrepreneurship. 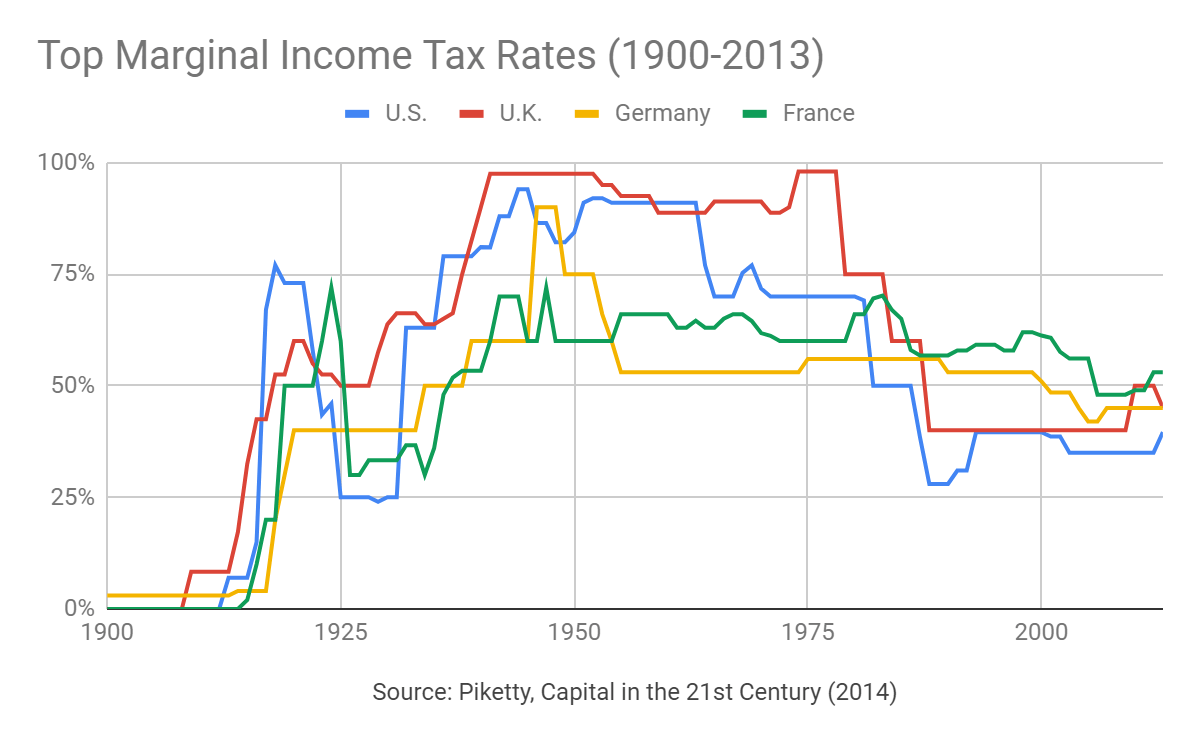 This chart from Piketty’s ‘Capital in the 21st Century’ depicts a decreasing trend in top marginal tax rates from a historical perspective, in a comparison between France, Germany, the UK and the US. The share of national income for the top 1% has been on the rise in many European countries.

The late Anthony Atkinson proposed a 65% top tax rate for the UK in ‘Inequality. What can be done?’ (2015), and also Piketty called for a rethinking of top marginal income rates in Europe.

Of course, as mentioned by Grace Blakeley, the situation on the European side is much more complex and would require capital controls to be effective.

However, if Europe is to accept the preoccupations for democracy expressed by Saez and Zucman, it should have a debate on high-income taxation.