Even though Theresa May appears to be playing a remarkably high-stakes game of chicken with Brexit, most readers know all too well that her gamble to get her deal or her fantasy of a revised version approved are far more likely to precipitate a crash-out than any other outcome.

This weekend has produced yet another round of mind-boggling developments in the form of dueling op-eds. In the Telegraph, May gave a rousing rendition of how she was still going to deliver a Glorious Brexit, and by March 29 on top of that…and no one believes her. Simon Coveney, Ireland’s foreign minister, issued a reply of sorts via an op ed in The Times, which politely pointed out that it was Brexit that upset the delicate balance achieved through the Good Friday Agreement, that the backstop was a hard-negotiated solution to the thorny problem of how to achieve a Brexit while preserving peace between Ireland and Northern Ireland, and, no, the Withdrawal Agreement would not be renegotiated.

Even with the plot overview, one is left wondering how May can possibly think this will work out. Some snippets from her Telegraph article: 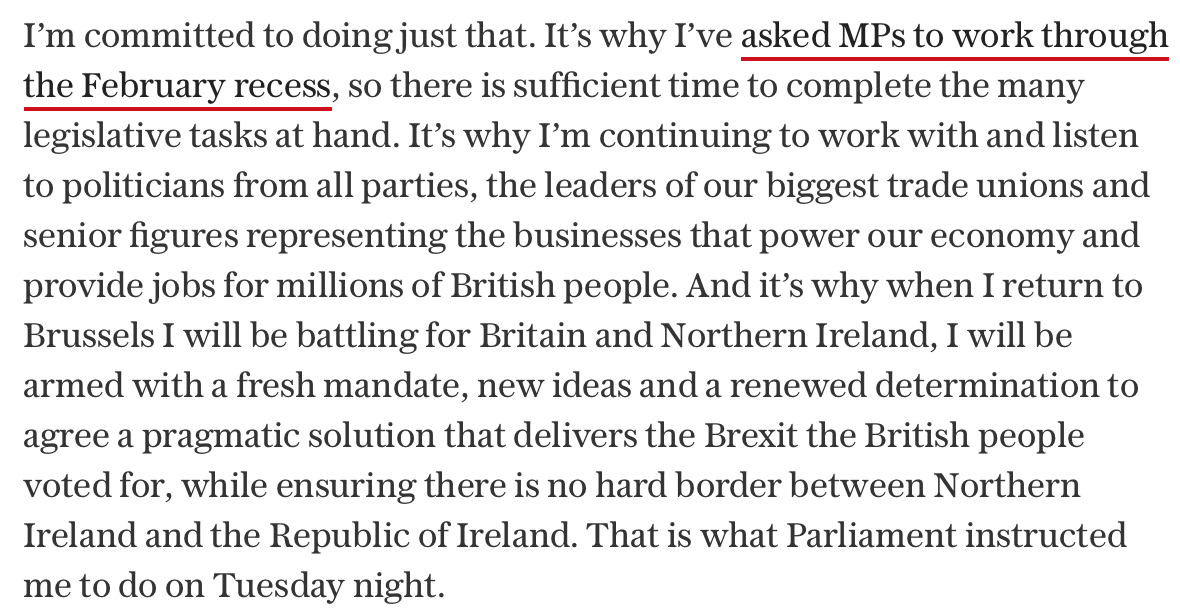 And when we said no one believes her, that includes Telegraph readers who are presumably Tory voters. Clive sent along this sample: 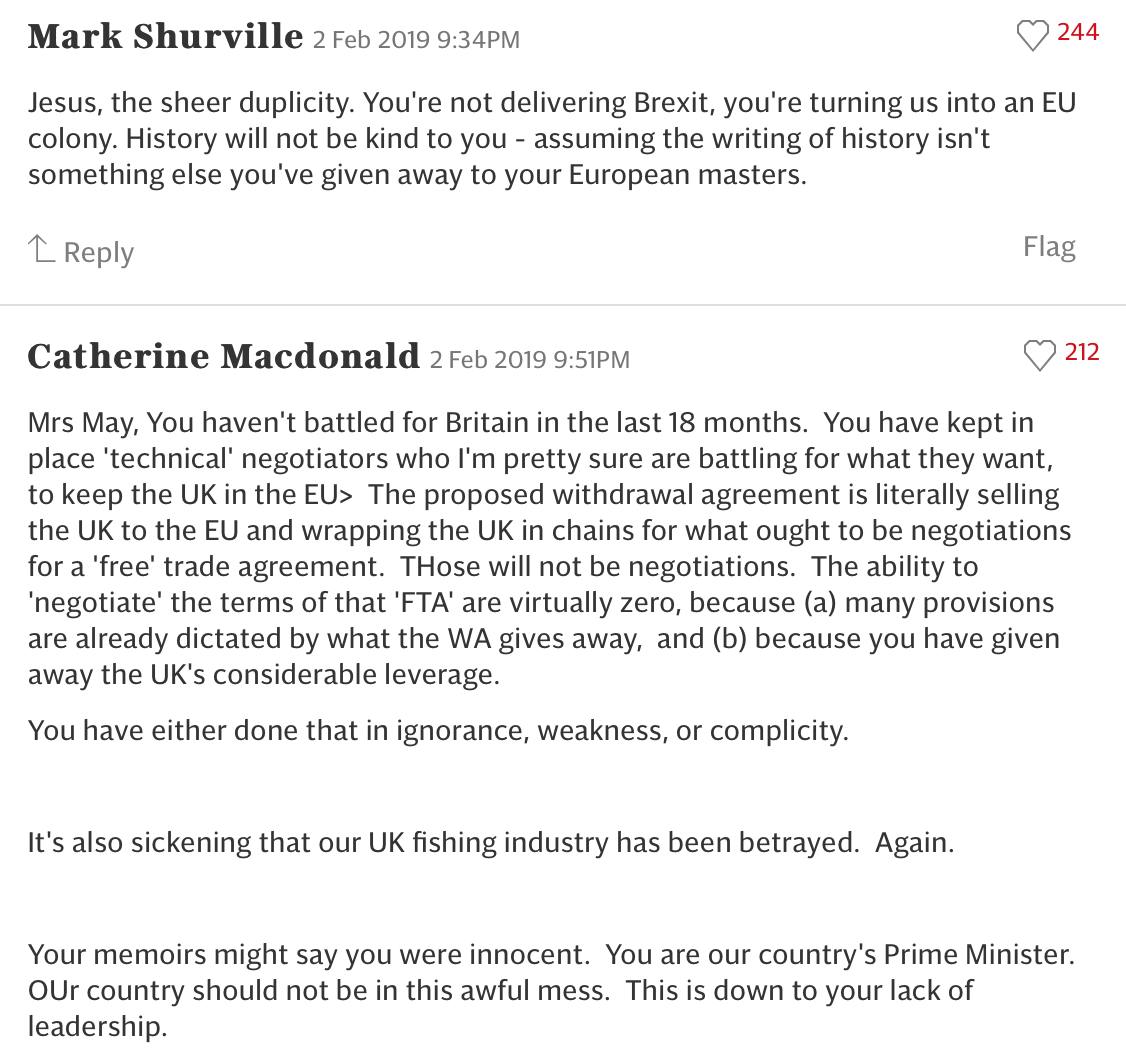 Even here, there’s plenty of Brexit delusion on display, that the UK had negotiating leverage.

May has neverhteless taken the remarkably cheeky step of not scheduling her report to Parliament on her clearly silly effort to reopen the Withdrawal Agreement until February 13….when Donald Tusk’s spokesperson tweeted it was a non-starter seven minutes after the vote. How is she managing to chew up that much time? By creating a Tory busywork committee to draw new, better unicorns, From the Independent, Brexit: Theresa May accused of ‘wasting valuable time’ as she launches group to find Irish backstop alternatives:

Theresa May has been accused of “wasting valuable time” in the countdown to Britain’s exit from the EU as she announced plans to establish a Commons group probing alternative plans for the Irish border post-Brexit.

Despite the prime minister’s hopes of reopening the withdrawal agreement already being dashed by EU leaders with just 53 days to go until Brexit, the new committee made up of senior Tory MPs will meet for the first time on Monday….

Theresa May has been accused of “wasting valuable time” in the countdown to Britain’s exit from the EU as she announced plans to establish a Commons group probing alternative plans for the Irish border post-Brexit.

Despite the prime minister’s hopes of reopening the withdrawal agreement already being dashed by EU leaders with just 53 days to go until Brexit, the new committee made up of senior Tory MPs will meet for the first time on Monday.

If nothing else, May is doing everything in her power to block consideration of revoking Article 50 or even a delay, despite ministers like Andrea Leadsom clearing their throats and saying the UK might need a wee delay to pass all the required legislation. If you didn’t see this tweetstorm that Lambert featured yesterday in Links, please click through and read it in its entirety:

We need to talk about the European Union (Withdrawal Agreement Implementation) Bill.

Behind the scenes a constitutional outrage is brewing quietly.

This is a critical issue that like so many aspects of Brexit, heretofore appears to have been ignored.

First the Withdrawal Agreement Implementation bill is another hurdle to pass to get May’s Brexit done, and hence another point of failure. The more hurdles an initiative has to surmount in order to succeed, the greater the potential for failure. In addition, as Paul Daly points out, it’s debatable whether the provisions on citizen’s right are constitutional. In other words, the Withdrawal Agreement Implementation bill gives the Ultras two more chance to jam the controls and precipitate a crash-out…and that’s generously assuming Parliament passes May’s Withdrawal Act because it can’t find another way to prevent a no-deal Brexit.

Now we do have some efforts to steer the UK out of its nosedive. Nichola Sturgeon is expected to say that the UK isn’t remotely prepared for Brexit. But Sturgeon is pushing her own unicorn, that of a second referendum. It was already too late at the “never got off the ground” Parliament revolt of January 29. Similarly, Heiko Maas, Germany’s foreign minister, expressed his fond hope for an “exit from Brexit,” meaning an Article 50 revocation, but acknowledged the odds were “extraordinarily low.”

But Robert Peston’s update, based on conversations with May’s ministers, shows the continued fixation with internal politics:

It’s not that they doubt Theresa May is working to take the UK out of the EU. It’s just they cannot see how it is remotely possible that departure can be achieved in the less than eight week remaining before the official leaving day….

Far worse for most of them is that they are guessing at her real strategy, since they don’t believe her official line – that she believes the EU will move far enough, or at all, on the widely loathed backstop to secure a majority for a Brexit deal from the votes of Tory MPs and Northern Ireland’s 10 DUP MPs…

Some ministers are crossing their fingers that the next time parliament is allowed a vote on backbenchers’ Brexit-related amendments, on 14 February, at least one enterprising centreground Tory will table a call for a customs-union destination for the UK. “That would flush out whether the PM will ever opt for the only practical compromise” said one minister.

Were May to relent and go with a customs-union-based Brexit, the resignation of the secretary of state for international trade, Liam Fox, would not be far behind, of course, since he would no longer be able to negotiate free trade deals under customs-union rules.

But that would be trivial collateral damage, compared with the mass cabinet resignations were Theresa May to abandon all hope of a deal and instead make it official policy to go for a no-deal Brexit….

And what a significant number of ministers tell me is that there will be mass government walkouts on or before 14 February – to take advantage of that next available date to vote to rule out a no-deal Brexit – unless before then the PM publicly announces an intention to negotiate with the EU a postponement of Brexit day of at least three months.

Yves here. Maybe I’ve seen May soldier on in the face of repeated defeats that I’m becoming complacent as it is clear that a real crisis is on the verge of finally happening. May has survived waves of ministerial resignations before. I’m skeptical that even “mass” resignations would deter her if she could manage to find replacements in a few days. May does not appear likely to go until a vote of no confidence forces her out. Even if some Tories defect, would the more alert Labour Party members recognize that it would take maneuvering that might not be viable to prevent a crash-out?

May appears to think that her big leverage point is the fear of a crash out. But the EU is not moved, the Ultras keenly desire it, and Tory party members prefer it to no Brexit or May’s deal. As we’ve indicated, it’s not clear the EU will give an extension if the UK plans merely to thrash around some more. And there does not appear to be enough Parliamentary backing for a second referendum, even if the EU would go along, let alone an Article 50 revocation.

So a blow up mid February now looks to be in store. But whether even a major eruption can change the trajectory May has set in motion remains to be seen.