Yves here. This is an awfully simplistic history of American economic organization. For instance, it acts as if everyone in the East packed up and went West. In fact, a lot of those settlers were Europeans who came directly to the Great Plains (this is particularly true of Germans and Scandinavians). By contrast, coming from old Yankee stock, the post overdoes the patriarchy bit. Coastal New England towns depended on fishing and whaling. Most of those boats went out for four to six weeks, leaving the wives alone and very much in charge (hence also the fixture in some old oceanfront houses of the “widow’s watch,” for the wives to see if their man’s ship was pulling into port). So depicting the “north” as a patriarchy is simplistic in terms of how things worked in practice. I’m sure readers can fill on other ways in which the broad strokes are a little too broad.

Nevertheless, it makes the point that until the later part of the 1800s, subsistence farming was the most important way most households provided for themselves.

By James Parisot, who currently teaches in the Department of Sociology at Drexel University. He is co-author of the book American Hegemony and the Rise of Emerging Powers (published by Routledge). Originally published at openDemocracy 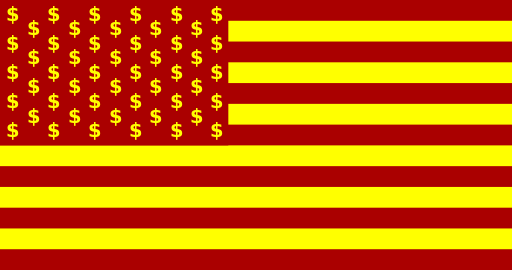 The flag of US capitalism, red and gold to honor our fallen comrades. Credit: Wikimedia/HHemken.CC BY-SA 3.0.

Is it the right for white men to own slaves?

Is it the idea that freedom can be realized through wage labor?

Is it a society in which democracy is viewed as compatible with an economy run by a small number of massive banks and corporations?

None of this is normal. But while slavery is no longer seen as acceptable, capitalism seems ordinary. Just as Europeans colonized most of the world’s peoples and justified this as the ‘natural’ way of things with racist, Eurocentric ideology, so the tendency in American history is to read the past through the lens of the present: to take what appearsas normal today and see it as the regular order of things for all times.

But in many respects capitalism was not always a normal or natural part of American life. This was especially the case in the American north in the seventeenth and eighteenth centuries. Here, the family farm remained a mainstay of rural life. And in cities, artisanal production organized around masters, journeymen, and apprentices tended to be the norm. Of course, there were capitalist interests involved in the colonial endeavor from the start; it was a private joint stock company – the Massachusetts Bay Company – that aimed to profit by sending settlers across the Atlantic in the 1600s.

But the social relations that formed in the northern colony and pushed expansion to the western frontier were not exactly ‘capitalist’. The typical small farm of the period was organized around a patriarchal, gendered hierarchy in which men tended to push their families to the frontier, leaving little choice but for their wives and children to join them. They were the rulers of the household, hunting and farming while their wives took care of household chores. However, the goal of social life was not profit, and wage labor was seen as a form of social dependence againstfreedom. In other words, freedom and wage labor were not necessarily viewed as compatible.

Similarly, an artisan controlled his own schedule and tools, and owned what he produced. The artisan’s labor was not alienated from him – what he produced was not owned by another – but controlled by him: his patriarchal freedom was defined against being a dispossessed wage laborer.

This is not to be idealistic. The northern social structure was organized around racism, sexism, and patriarchy. There was a mix of capitalist and non-capitalist elements at work, particularly as tensions grew between settlers who saw the frontier as a zone of independence for their farm-based lifestyles, and capitalist speculators who viewed the west as a great space for profits. But the point is simply that capitalism itself, and capitalist labor, was not necessarily ‘normal’.

In the south though, capitalist slavery wasnormal. It was not so for the slaves themselves, of course, who were brought to the south with their entire lives and bodies controlled by white masters, not just their labor time. But it was normal for politicians, slave owners and poor whites who worked as patrollers at night to capture slaves who had escaped. Racial inferiority was seen as the natural way of things; after all, classically-educated slaveowners read that even Aristotle had said that some people are naturally slaves and others naturally masters.

The normality of slavery was extinguished with the Civil War, wherein somewhere between half to three-quarters of a million people were killed. As slaves rushed to northern lines, and northern military leaders gradually realized it was in their interests to free the slaves (at least in the rebelling states) to strengthen their forces and weaken the south, the north, driven by slave resistance, abolished slavery in the confederacy.

After the war, as the south was reconstructed, the goal of the north was essentially to rebuild the south on the basis of capitalist wage labor. Rarely were ex-slaves given ’40 acres and a mule’. Instead, they were hired as wage laborers or became sharecroppers. As freed blacks pushed to become independent farmers and the white elite worked to resubordinate black plantation labor, so a new class balance was reached as the owners of land and tools allowed freed blacks to work on farms, so long as they paid a price to their former masters who could sell their production for profit.

Meanwhile in the north, capitalism increasingly became naturalized. By the 1880s, western expansion was driven less and less by the family farm and increasingly by the power of capital as apprentices and journeymen became wage laborers, masters became capitalists or workers themselves, and family farms were replaced by agribusiness. The Midwest became the breadbasket of America as the far west, from Montana and Nevada to New Mexico and California, was developed by railroad and mining companies. While some family farms persisted and were granted land by the Homestead Act of 1862, the west, like the rest of a country born through the racial cleansing of native peoples, became a massive zone of resource extraction.

Overall, by the late 1800s capitalism had effectively become the norm. By this time both the Democratic and Republican Party’s ideologies of freedom and democracy meant, essentially, freedom for capital to control the United States.

As recent pollshave shown, millennials have become increasing critical of capitalism and increasingly supportive of socialism. Symbolized by the popularity of politicians including Alexandria Ocasio-Cortez and Bernie Sanders, and the rise of the Democratic Socialists of America, this younger generation appears to be looking for a different way forward.

This is complicated by the fact that many Americans have little idea what socialism means, though more often than not the term is used to refer to increased corporate taxes and better welfare programs rather than the rearrangement of our social lives away from profit maximization and wage labor towards cooperation and the collective management of work.

James Parisot’s new book is How America Became Capitalist: Imperial Expansion and the Conquest of the West, published by Pluto Press.