Yves here. This isn’t the most inspired discussion of MMT, but it does give an idea of where mainstream economists are. The fact that MMT is now being treated as a topic of consideration means it is well beyond the “First you ignore them” stage.

By Inês Gonçalves Raposo, an Affiliate Fellow at Bruegel who previously worked for the Financial Stability Department of the Bank of Portugal. Originally published at Bruegel

An old debate is back with a kick. The discussion around modern monetary theory first gained traction in the economic blogosphere around 2012. Recent interventions in the US and UK political arenas rekindled the interest in the heterodox theory that is now seeping into mainstream debates.

It is February 2019 and modern monetary theory (MMT), a heterodox theory born in the late 1990s, has made its way into mainstream discussions, on the back of public support from political figures both in the United States and the United Kingdom.

Interest around MMT is now at its peak (Figure 1) and the economic blogosphere and #econtwitter have been having heated discussions on the matter. A few weeks ago, we reviewed some of the opinions around MMT, most of which tied with the debate on US debt. In this post, we gather the main points that have been raised over the past week. 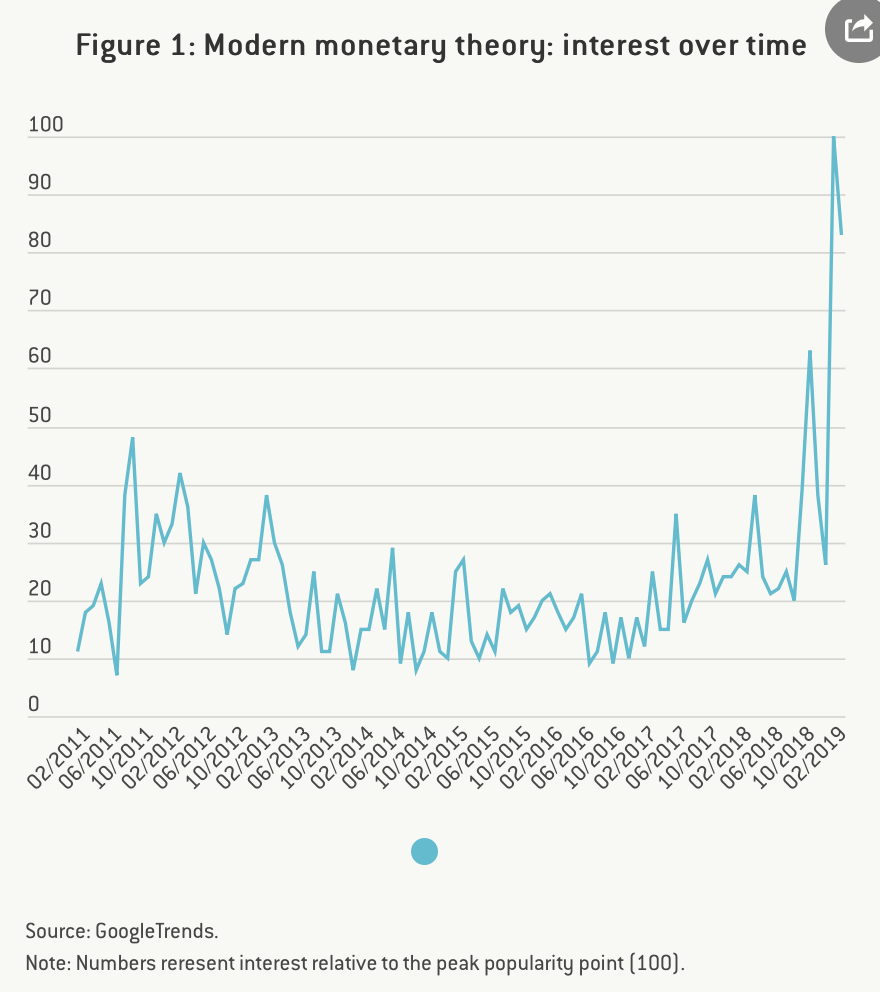 What Is (Not) MMT

Most of the debate has been on understanding what MMT actually is. In fact, the basis for MMT started in the 1940s. Back then, Abba Lerner coined the term “functional finance”. The base premise from which MMT later drew was that, under “functional finance”, fiscal policy should be the main instrument used to stabilise the economy – taxes, and not central-bank interest rates, should be used to remove people’s spending power and thus stave off inflation. This was a view shared by some in the postwar period, as Randall Wray, one of the main authors of MMT, explains.

Wray also summed up MMT in 10 points, two of which have been the main focus of contention.

Jo Michell had something to say on what MMT is not. Michell debunks the claim that “government deficits are necessary and good because without them the means to make settlement would not exist in our economy”:

“This claim is neither correct nor part of MMT. I don’t believe that any of the core MMT scholars would argue that deficits are required to ensure that there is sufficient money in circulation. (…) The macroeconomic reason for running a deficit is straightforward and has nothing to do with money. The government should run a deficit when the desired saving of the private sector exceeds the sum of private investment expenditure and the surplus with the rest of the world. This is not an insight of MMT: it was stated by Kalecki and Keynes in the 1930s.”

As Josh Barro clarifies, though, there is no magical money tree involved. “The government is not constrained by its ability to obtain dollars, but the economy is constrained by real limits on productive capacity.”

Main lines of criticism: Inflation, “there is nothing new about this” and “there is no underlying theory”

As Brad deLong puts it, MMT has a “modest goal” that can nevertheless go wrong, should three implicit assumptions prove to be false: the first one, that the debt market is efficient; the second, that investors react quickly and that inflation will too, should concerns over government sustainability become evident; the third, that investors will only “borrow foolishly” on a small scale.

Jonathan Portes criticised MMT for not accounting for the role of the private sector in determining the level of demand and inflation. Portes takes issue with the claim that deficits are necessary for growth. “Money is ultimately a creation of government—but that doesn’t mean only government deficits determine the level of demand at any one time. The actions and beliefs of the private sector matter as well. And that in turn means you can have budget surpluses and excess demand at the same time, just as you can have budget deficits and deficient demand.”

In his post, Portes describes MMT as the reversal of the traditional management of macroeconomy through interest rates (aka the “Consensus Agreement”). Alexander Douglas argues that this Consensus asymmetrically affects the poor, who have less control over their cash flow.

“When rates are high, they can’t defer consumption; they have bills to pay and necessities to buy. (…) When rates are low, they have neither the spare capital nor the collateral base to take full advantage by making investments the way that rich people can. (…) The poor can’t, in technical terms, optimise over the yield curve anywhere like as well as the rich can.”

The distributional consequences of increasing interest rates have been empirically assessed in the literature by e.g. Amaral, 2017 (“the more meaningful changes in inequality occur over longer periods of time than the horizon at which monetary policy operates and are most likely the result of structural changes (…) while monetary policy may have some redistributive consequences, their magnitude seems to be small”), Ampudia et al. (2018) or Bunn et. al (2018). Meanwhile, Colciago et al (2018) review the literature and conclude that “empirical research on the effect of conventional monetary policy on income and wealth inequality yields very mixed findings, although there seems to be a consensus that higher inflation, at least above some threshold, increases inequality”. Douglas acknowledges that redistributive taxation can compensate for the distributional impact of interest-rate adjustments, but leaves the open-ended question:

“Why not, therefore, use tax to control inflation instead?  (…) Why not skip the middleman?”

Brian Romanchuk, on the other hand, takes issue with those critics of MMT who argue that it leads to inflation or hyperinflation. “The whole premise of MMT is that “too much” spending leads to “too much” inflation, and that is to be avoided. The only real debate is how much spending is “too much.” To critics that say that MMT is nothing new, Romanchuk answers that MMT should be seen as building from post-Keynesian theory: “The key point to understand is that MMT is part of a long line of post-Keynesian theory, and in academic circles, is described as such. The ‘MMT’ moniker can either be viewed as a branding exercise, or an attempt to create a consistent body of thought within the wider post-Keynesian literature. This latter step was necessary, since we have to admit that the post-Keynesian project was a practical failure.” Finally, Romanchuk tries to assert the “T” in MMT, naming and expanding on two divergences between neoclassical and MMT economists: their takes on overlapping generations models, and on the inter-temporal governmental budget constraint.

The ZLB Is Where Both Sides See Eye to Eye

There seems to be, however, one instance in which both sides can agree, and that is when the zero lower bound (ZLB) comes knocking at the door. Portes notes that taking fiscal policy as the main tool may be called for under the ZLB, although in his view “that’s no longer controversial, and was explicitly recognised by government policy during and immediately after the 2008 financial crisis”.

In fact, back in October, Simon-Wren Lewis had weighed MMT and non-MMT against a five-question framework and concluded that, whenever the economy is not on the ZLB, using fiscal policy as the main stabilisation tool is less desirable, as it is slower to implement, cannot be delegated and is subject to political incentives. “A potentially strong argument against monetary policy is the lower bound problem. You could argue that having monetary policy as the designated stabilisation instrument gets government out of the habit of doing fiscal stabilisation, so that when you do hit the lower bound and fiscal stabilisation is essential it does not happen. Recent experience only confirms that concern.”

After an intense week of social-media spats, it is unclear where this discussion will lead in practice. Perhaps the most interesting element is that political clout brought mainstream and heterodox to talk to each other. In any case, deLong leaves us with a silver lining – “the government should make it its first priority to use its tools of economic management so that we do not experience either [high unemployment or excessive inflation]; and maybe the government needs to be a little bit clever in how it uses fiscal and when and how it uses monetary policy to keep the task of financing the national debt from becoming an undue or even an unsustainable burden”.