This piece will be a little disjointed, I’m afraid, because saving the biosphere is a large topic, larger even than the aircraft industry, and I don’t feel I’ve quite mastered the material. Note that although the tone will be polemic, this is not a “Modest Proposal“; if indeed “the problem is as dire as much of the science suggests, the policies must match the rhetoric,” and that must include measures like that of the headline, and many more. So, consider this post a forcing device for further discussion. I’ll take a brief tour of the private jet aircraft industry — I’m mostly talking your basic Gulfstream rendition jet, not your Third World dictator Airbus or Boeing, and not your Piper Cub, or hospital helicopter — followed by discussion of the industry’s impact on the biosphere. From there, I’ll discuss how to get rid of them. Finally, I’ll deal with possible objections from the high net worth-owners of private jets. But first, I’ll answer the question in the title, aesthetically: 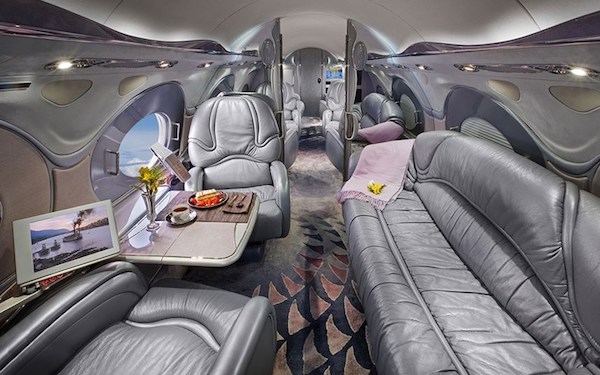 I submit that no artifact so symbolic of the costly bad taste and wretched excess of the rich should be permitted to exist. (Sadly, I can’t find an image of the interior of Jeffrey Epstein’s “Lolita Express” that I can use. But it’s equally horrid, and so it should be.)

Second, logically, I suggest that those who can afford to own and run private jets should get rid of them, in their own best interests, as today’s equivalent of a “wartime sacrifice” in the fight to save the biosphere from cooking itself and everything in it. Basically, it’s the least they could do (“Paris Climate Accord Backers Won’t Say if They Support Ban on Private Jets“). The Windsors, after all, subsisted or were said to subsist on ration cards during World War II, and very successful propaganda it was for them, too. So much better than peasants burning the land records, eh? And what followed?

Now to the private aircraft industry. First, how many private jets are there? From Statista (2017), a handy chart 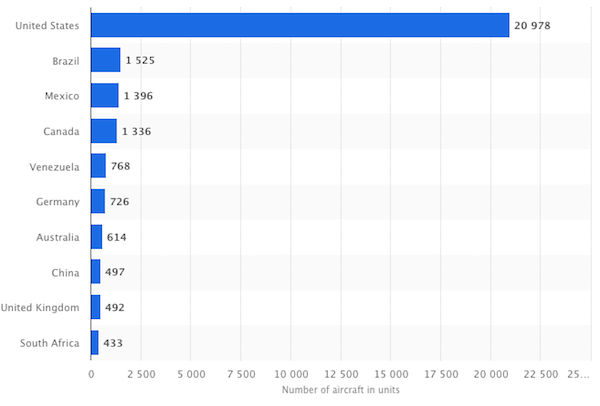 20,978 private aircraft, then, in the United States. (I’m going to assume that the Third World DIctatory-style private jets are a small fraction of this number, and that most are Gulfstreams, Bombardiers, Embraers, etc.). Of these, 13,392 (63%) are owned by “Ultra High Net Worth Individuals.” The balance would break down to corporations, and various forms of rental or fractional ownership. This breakdown is confirmed by departures. CNBC, citing to Knight Franks 2018 Wealth Report: “In the U.S. private ownership continues to lead the way with 62 percent of departures, charters in second place with 27 percent and fractional with 11 percent.” The Sherpa Report discusses costs:

The costs of buying and owning a plane vary by aircraft model. In very simple terms, the bigger the plane, the more it will cost to both buy and maintain. Age and usage also make a big difference to the initial cost of a plane. For instance, you can find 30+ year old light jets (such as a Learjet or a smaller Cessna) for well under $1m, whereas a brand new large, heavy jet (such as a big, long range Gulfstream) can cost over $70m, or over $100m if you want a custom fitted Airbus or Boeing.

There was a day when the super-rich bought a private jet to travel alone in peace or with the family. Those winds are shifting fast with the competitiveness of the charter segment, which hampers the attractiveness that owning a jet once had. Owners keep owning, but the new potential buyers are moving away from the high annual costs of owning their own aircraft and investing in the cost-efficiency that comes with renting one, thus avoiding the piling maintenance [?], insurance and hangarage costs. If you don’t fly more that 250 hours a year, then the private aviation standard calls for not buying.

Be that as it may, the biosphere cares about greenhouse gases (and probably other things), and not about financial engineering. So let’s turn to the effects on the biosphere of private jets. From Triple Pundit:

According to the Air Transport Action Group (ATAG), the global aviation industry accounts for 2 percent of anthropogenic carbon dioxide emissions (some put the number at closer to 3 percent). General aviation, including aircraft used for business, represents only 0.20 percent of the 36 giga-tons of global annual CO2 emissions from burning fossil fuels (and making cement).

That tiny percentage is understandably how industry prefers to portray its contribution to climate change, but aviation is the fastest growing source of greenhouse gas emissions — contributing about 13 percent of all emissions from the transportation sector. There’s more to the story than just aggregate percentages.[1]

Now, 0.20 percent is not very much (actually less, since though the US has most of the jets, it doesn’t have all of them). If we think of tranches of CO2 that we want to reduce, this is a pretty thin tranche. On the other hand, we have pitchfork-worthy headlines like this:

(And all of those planes look like Figure 1 on the inside. Or worse.) ~0.2% is small, it’s true, but political support (leaving aside lobbyists) for this squillionaire banditry — you saw what happened to Howard Schultz last week — cannot be high. Claiming this ~0.2% tranche to save the biosphere ought to be a reasonably unheavy lift. If we can’t deal with a mere 20,978 machines, 13,392 of which owned by individuals with names and addresses[2], what can we do? (Caveat that what follows will be extremely crude; general aviation is a big field, and I don’t intend to get rid of tiny propellor aircraft like Piper Cubs, or hospital helicopters, or fire planes. I do want to get rid of any jet aircraft that has, had, or could have an interior like that in Figure 1.)

So, to get rid of private jets , so loosely defined, and claim our ~0.2% tranche of C02, what would we have to do? Spitballing here:

1) Mothball all private jets in the “Airplane Graveyard” in the Mojave desert.

2) Invalidate all private jet permitting to take off or land, at any airport in the United States (This should also apply to international private jets attempting to land here.) I don’t know how this would be done bureaucratically; perhaps by de-accessioning the tail numbers?

3) As with the UK’s Slave Compensation Act of 1837, compensate the owners — as opposed to burning the land records — using whatever the equivalent of Blue Book Value might be. (Say, 20,978 * $3,000,000 = $62,934,000,000, call it $63 billion if my math is correct, which is real money, but not compared to one-third of the economy, and anyhow, the compensation might be stretched out. Or perhaps we could let them write the planes off on their taxes. If they have not already done so.)

The goal is to get the private jet aircraft out of the sky, because that’s the simplest and least game-able way to claim our ~0.2% tranche of C02.[3]

Some may think my methods are unsound. There will be objections:

(1) “We won’t be able to escape to our bunker in New Zealand!” I thought you were raising an objection?

(2) “We won’t be able to visit our trans-Pacific suppliers!” Teleconference.

(3) “We’d have to fly commercial and use ordinary airports.”. Perhaps that will help with your empathy problems.

(5) “Our time is valuable.” I’m not no sure. Thorstein Veblen makes the following distinction between business and industry:

In proportion as the machine industry gained ground, and as the modern concatenation of industrial processes and of markets developed, the conjunctures of business grew more varied and of larger scope at the same time that they became more amenable to shrewd manipulation. The pecuniary side of the enterprise came to require more unremitting attention, as the chances for gain or loss through business relations simply, aside from mere industrial efficiency, grew greater in number and magnitude. The same circumstances also provoked a spirit of business enterprise, and brought on a systematic investment for gain. With a fuller development of the modern close-knit and comprehensive industrial system, the point of chief attention for the business man has shifted from the old-fashioned surveillance and regulation of a given industrial process, with which his livelihood was once bound up, to an alert redistribution of investments from less to more gainful ventures, and to a strategic control of the conjunctures of business through shrewd investments and coalitions with other business men.

How much of this “valuable” time is taken up with “strategic control of the conjunctures of business” — which some might put under the heading of “The Bezzle” — as opposed to the socially valuable work of industrial production? I would bet a lot. (Financial time is quicker than industrial time, perhaps.) Maybe this whole program would pay for itself by eliminating a ton of useless mergers and acquisition deals, and a lot of fraud. In any case, the Captains of Industry in the Nineteenth Century used to ride the rails in luxury sleeping cars. Add connectivity, and do that. If it’s good enough for Andrew Carnegie, it’s good enough for you!

And although this one is highly unlikely, at least from the squillionaires:

(6) “But what about the workers?” Well, in the worst case, that’s why we’re going to need a Jobs Guarantee, to handle the dislocations. Sadly, jobs in the aircraft industry are very well-paying, as they should be. But since this proposal is part of mobilizing the country and putting it on a war-time footing, it’s very hard for me to imagine that the industry’s engineering and manufacturing skills can’t be repurposed for some other, better purpose (like Ford making tanks during World War II).

Rough and ready though this example of “government assisted creative destruction,” as Yves calls it, may be, I think we need a lot more examples like it — though better! At least I have pointed out to a tranche of CO2 to reclaim, and put forward a method for doing that, however much of a forcing device it may be. I wonder how many other (relatively) low-hanging fruit there may be?

[1] Carbon is not the only issue with aircraft. More from Triple Pundit:

The impact of CO2 emissions on climate is the same irrespective of its source…. For NOx and H2O emissions, climate impact is localized and amplified at high altitude. Nitrogen oxides chemically react with light to form ozone (O3). The higher intensity of light in the upper atmosphere produces more ozone from NOx emissions, and these emissions have more influence on climate than those same emissions at ground level. Water vapor is a potent and short-lived greenhouse gas, present mostly at lower altitudes. Introducing H2O into the normally dry air of the upper troposphere and lower stratosphere create the condensation trails we’ve all seen and possibly the formation of cirrus clouds. Since cirrus clouds don’t typically form in the upper atmosphere, there remains uncertainty as to the impact on climate, though studies suggest that these high-altitude clouds have an insulating effect, trapping heat. In the report Aviation and the Global Atmosphere, the Intergovernmental Panel on Climate Change (IPCC) determined that aviation emissions have about two times the impact as ground-based emissions.

[2] I’m leaving out the world of rendition, the Lolita Express, and every other world that might come into being in a lawless environment high up in the sky. William Gibson gives a vivid picture of this world in Spook Country. I don’t think getting rid of those worlds would be any great loss.

[3] “Get them out of the sky” as opposed to some screwed-together, ObamaCare-like, public relations-driven, and eminently game-able policy like carbon offsets.