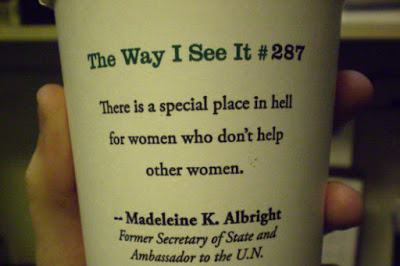 Something to notice at the periphery of the Democratic Party festival of ghouls and delights known as the 2020 primary campaign. It’s going to be a rich and interesting race if one is a novelist looking for material, but this especially caught my eye.

One of the announced candidates is former Starbucks CEO Howard Schultz, who’s offering to fill the Democratic Billionaire slot he thinks the Party needs in its suite of offerings (see “2020: Year of the Anti-Trump Billionaire?“)

Starbucks is a company with $22 billion in annual revenue and $14 billion in assets. Normally companies don’t pay a price when people who own and run them are exposed as the reason the country’s in so much trouble — for example, I don’t think Chick-fil-A has suffered much despite the 2012 revelation of the virulent anti-gay prejudice of its boss, Dan Cathy. Their apology tour came and went about as fast as the controversy.

But Starbucks is taking no chances. It has tasked Democratic PR and consulting powerhouse SKDKnickerbocher with making sure that any Democrat who criticizes Schultz leaves Starbucks out of it.

One of the top Democratic firms in the country is privately urging top officials in the party to leave Starbucks out of the burgeoning feud with the company’s former CEO and presidential aspirant, Howard Schultz.

Officials at SKDKnickerbocker, a progressive public affairs and consulting firm, have been reaching out to Democratic operatives in the last week expressing fear the animus
directed at Schultz over his proposed independent presidential bid was having a spillover effect on the coffee conglomerate he used to lead.

One operative on the receiving end of the outreach said that the firm, which lists Starbucks as a client, offered to put a top Starbucks executive on the phone to discuss concerns over the politicization of their company in response to a prospective Schultz campaign.

“They really wanna make sure that Democrats and liberals aren’t going after Starbucks and are stressing that it’s not fair to the company,” said the operative, who relayed details about the conversation on condition of anonymity.

SKD’s message: No money should be harmed in the unmaking of that man.

Starbucks, of course, is taking no chances; thus the SKDKickerbocker warnings to Democratic bigwigs and operatives.

Two added points. First, companies should suffer for the sins of their owners and managers. Companies are force extenders for the very very wealthy, and leaving them to operate without consequences empowers those who do horrible things with the money and power that controlling those companies gives them.

The best way to hurt people like Chick-fil-A’s Dan Cathy is to hurt Chick-fil-A. Same with Lowe’s. Same with Georgia-Pacific. Same with Whole Foods. Those kinds of consequences seem never to occur, but they should. And Starbucks is no slice of angel food cake.

Second, SKDKnickerbocker is not a “progressive firm.” It’s an extremely powerful, extremely wealthy mainstream Democratic Party service organization, embedded deep in the Party’s ecosystem. Its clients have included Barack Obama, Andrew Cuomo, Michael Bloomberg, Joe Manchin, Joe Donnelly, and many many more. They were involved in defending the Keystone XL pipeline, among other sins. The firm is owned by Mark Penn, chief strategist for the Clinton 2008 campaign.

The takeaway from all this simple: Criticize the rich if you want, but don’t endanger their wealth; that must be left intact. Which tells us this is exactly where we should hit them.

Just something that caught my eye on the road to the coming festival.