We’d been skeptical of longer-dated private equity funds as soon as we heard about them. Marketed as emulating the strategy of Warren Buffett, who has about 2/3 of the value of Berkshire Hathaway’s holdings in stakes in private companies, these funds were set to have lives of 20 years (as opposed to 10 for conventional private equity funds1) and planned to hold the individual portfolio companies longer than the “typical” five years.2 The private equity industry push for these types of funds occurred when top general partners were warning that they expected performance to decline in the future. These longer-lived funds looked like an effort to lock up money during a what could have been a last hurrah for the industry.3

But the Warren Buffett branding, and the pretense that these long-hold funds would perform well, now looks like a big ruse. It isn’t just that CalPERS, which is awfully keen to launch a captive version of these fund, has admitted that it won’t perform as well as conventional equity funds, raising big red flags as to why CalPERS is so eager to go this route.

This finding comes from a new study that won the Top Award in the CFA Institute’s 2018 Graham and Dodd Awards of Excellence. The Institute confers awards in various categories and then designates a “best of show”. The paper, Buffett’s Alpha, by Andrea Frazzini, David Kabiller, CFA, and Lasse Heje Pedersen, all principals at quant powerhouse AQR, looks in depth into how Buffett generates his alpha. We’ve embedded the study, as well as a short article explaining it, at the end of this post.

The article finds that to a significant degree, it is because old-fashioned Graham-Dodd investing works. Another factor is that (contrary to Buffett’s own claims), Berkshire Hathaway uses a lot of leverage but still funds very cheaply. Not only does it have an AAA rating, but it effectively borrows at below Treasury rates by using the float of the Berkshire Hathaway reinsurance operation.

Even though Buffett outperforms, it has done so with very high volatility. Recall that Berkshire was a dog during the dot-com era.

We could not directly observe the value and performance of Buffett’s private companies, but based on what we do know, we could back them out. First, we could infer the market value of private holdings, PrivatetMV, as the residual because we could observe the value of the total assets, the value of the publicly traded stocks, and the cash….
.
We then computed the return of these private holdings, rtPrivate+1, in a way that is immune to changes in the public stock portfolio and to splits/issuances by using split-adjusted return. 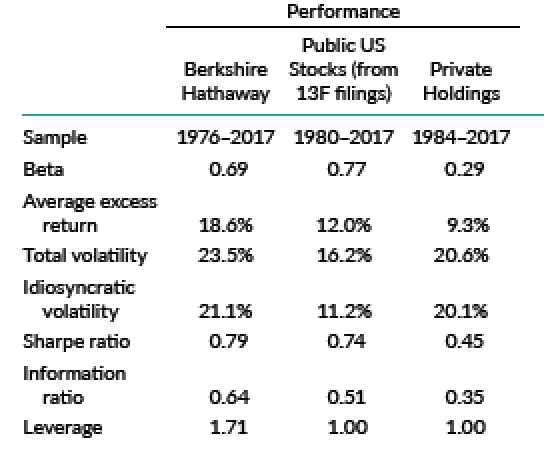 Notice that Buffett’s private equity portfolio is more volatile than stocks, even though the authors attribute the same leverage to the public and private portfolios. Notice also that the Sharpe ratio, a measure of returns relative to risks, is also much higher for Buffett’s public stock holdings than his private ones.

These results come despite Buffett, unlike virtually all private equity fund managers, being willing to sit on the sidelines during frothy markets.

Another reason to be skeptical of CalPERS “Warren Buffett” strategy is that Buffett stressed in his just-released annual shareholders’ letter that he hasn’t done any major deals in recent years and isn’t likely to this year either. From the Wall Street Journal in Warren Buffett Can’t Find Anything Big to Buy:

Warren Buffett is always on the hunt for “elephants,” as he calls large acquisitions. But three years have passed since he bagged a new one.

“With rates low and private equity folks drunk with cash and money all over the place, it’s just naturally going to be harder” for Berkshire to find acquisitions, said Bill Smead, chief executive of Smead Capital Management Inc., which holds Berkshire shares….

Recall that CalPERS has also depicted the “Warren Buffett” fund as making few but large deals. If Buffett can’t make a go of this, why should CalPERS expect to do better?

While private equity, like second marriages, is an exercise in hope over experience, there is a lot of hopium being smoked at 400 Q Street.

1 The funds allow for extensions beyond 10 years, but with typically with no management fees during the extension period(s).

2 Industry participants often describe the typical portfolio company ownership period as three to five years, but that it dated. The norm post-crisis is now closer to six years.

3 These strategies look more like hedges for the major firms since investors continue to pour money into private equity despite private equity returns failing to meet benchmarks on a widespread basis over the past decade and the warnings that things were likely only to get worse.