Yves here. This post brings up a classic issue about tactics for achieving change that readers often debate in comments. So it is useful to have an opportunity to focus on this question. 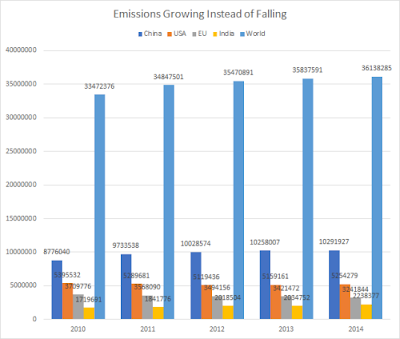 World CO2 emissions are growing, not falling. What will the children say? (source)

Modern America is a tense place these days. By that I mean, there are a number of tensions in American social and political life that are, this year, coming to a frothy head.

First, consider the tension in center and leftish circles around class war and the 2020 election. Many argue that the right way for to Democrats to win this election is by embracing “identity politics” — that racial justice, justice for women, for gay, lesbian and trans individuals, for indigenous peoples and all other victimized groups must come first, must be placed front and center. And not just for presentation and marketing purposes (though many do argue that vote-getting starts with making the identity case), but because fighting the old white patriarchy is a necessary precursor to fighting the class war — that if the old white patriarchy is in place, the class war can’t be won.

Adolph Reed Jr. has written much about this tension on the left (his latest is here), and proponents of the Sanders candidacy stand almost alone in believing the solution lies in winning the class struggle.

So that’s one tension. Another is the tension around radical, oppositional action versus a more considered, careful, inclusive approach. Visitors to DWT recently read about Rep. Pramila Jayapal and her “balancing act” — her attempt to keep real progressives, not-so-real progressives and Party leaders all aligned with genuinely progressive legislation like Medicare for All. Time will determine if that strategy succeeds; everyone I know hope it does.

Radical opposition, however, has its proponents, and no subject inspires them more than the coming climate catastrophe, which the world is doing less than nothing to head off (see graph at top).

Will the politics of accommodation work in this sphere, or will radical action be required? Must the current system be broken and rebuilt before a climate solution can be enacted?

As writer David Atkins explains it in the following twitter thread, the choices left to us are really one choice. First, the Right will not let — is not letting — the current system survive in any case; they’re breaking norms with everything they touch. Second, the current system cannot provide a climate solution. Thus breaking that system the way the Left wants to break it provides the only hope “for those of us who want to live to 2050.”

Radical thoughts for a radical time. Here’s that thread. See what you think after you read it.

Short thread here on climate change, the norms of democracy, and the battle between the right, center left and progressive left. Ready? Here goes… /1

The Right has always depended for its success on the implicit or explicit threat that it would be willing to subvert all the norms of democracy to achieve its goals, whether it be “2nd amendment remedies” or the Federalist Society’s changing all the rules in the courts…/2

This is how the Right works the refs: they let everyone know that they’re willing to pull out ALL the stops if white male patriarchy and racism don’t stay centered in society, and if rich people don’t get to keep all the loot. /3

The center left has long depended on being the “responsible” party. The cogent ones, the level headed ones. The perpetual Real Mothers in the Justice of Solomon [story] willing to sacrifice almost anything to salvage the system. /4

The problem is that this dynamic between right and center left is codependent and convenient to the status quo. The far right gets to keep the angry old racists happy, the center left keeps the concerned vaguely cosmopolitan educated crowd happy. And the donors always win. /5

The progressive left [is] saying “enough of this game. We, too, are willing to break the norms of American democracy because these issues are life and death emergencies.” We’re not going to play the responsible straight man to the GOP’s destructive clown. /6

Yes, we KNOW the Green New Deal can’t pass through the Senate under the current system. We’re not stupid. We’re [putting] down the marker that if this system won’t let the GND pass, we will change the system until it does–eliminate the filibuster, add states, pack courts, etc. /7

So when the center left says “but I can pass this weaker version”, the answer is twofold:
1) no, you can’t. The GOP is a destructive clown that won’t give you the time of day, either. But also,
2) we don’t care what you think [you] can pass. We’re telling you what we need. /8

The right has been very effective playing this game. They are signaling loud and clear they would rather have a Putin-backed dictatorship under a corrupt idiot than give up old white male privilege or [plutocratic] control. What is the left willing to do? How far will we go? /10

The center left’s answer? Nowhere. We’ll do whatever we can with the system we have, and whatever happens happens…as long as nobody’s stock portfolio takes a hit. That is completely, totally unacceptable to those of us who want to live to 2050. Or have [kids] who do. /11

If the system won’t budge with us, we’ll budge the system. We are dealing with catastrophic threats, and econ/tech challenges well beyond the capacity of our current politics. Your experience within the system means nothing now. Your commitment to the goal is everything. /12

In short, the current system WILL NOT SURVIVE. The right sees an existential threat from a browning, more progressive population. They cannot afford for democracy to survive, and they will kill it if given half the chance. /13

But the current system also won’t let us deal with our environmental, technological and economic challenges in anything like the timeframe we need to solve them. Which means the defenders of that system are just as dangerous in their own way as the right wing is. /14

The future belongs to the side that changes the system to accomplish their goals. Will it be young progressives? Or will it rich old racists? There is no middle ground. There is no responsible defense of the status quo. It’s going to be one side or the other. /fin

His conclusion is striking, but not surprising. We’ve heard it from others as well. As Atkins says:

• The defenders of the present system are as dangerous in their way as the right wing is.
• The future belongs to the side that changes the system to accomplish their goals.

The terms of this debate apply to a number of policy fields, and we’ll be hearing some form of this discussion, of this tension, throughout the 2020 campaign. For example, the Medicare For All debate has already been characterized (accurately in my view) as a battle to replace capitalism (see Ed Walker’s “The Green New Deal Challenges the Domination of Capital“).

But the argument above applies no more directly than it does in the climate debate, where the clock is running, the end (if it comes) is near and total, and there’s no turning back to anything that went before, no matter how much we wish it were not so.