Two years ago, the U.S.fracking industry was trying to recover from the crash in the price of oil. Shale companies were promoting the idea that fracking was viable even at low oil prices (despite losing money when oil prices were high). At the time, no one was making money fracking with the business-as-usual approach, but then the Wall Street Journal published a story claiming all of this was about to change because the industry had a trump card — and that was technology.

Today, frackers are again relying on technology as a financial savior, but this time, they are looking to Microsoft.

As ExxonMobil embarks on an ambitious move into fracking in the Permian oil fields of West Texas, it has announced a partnership with Microsoft to use cloud technology to analyze oil field data and optimize operations. Exxon claims the move could generate “billions in net cash flow.”

Time will tell if the Microsoft cloud will make Exxon rain profits in the Permian.

In March 2017, the Wall Street Journal ran an article with the headline, “Fracking 2.0: Shale Drillers Pioneer New Ways to Profit in Era of Cheap Oil,” which detailed the ways the shale industry expected technology could help it finally deliver profits. The article mentioned “longer, supersize wells” and said, “The promise of this new phase is potentially as significant as the original revolution.”

The article highlighted EOG Resources (as in, Enron Oil and Gas), a company often touted as the “Apple of oil,” and quoted the company’s chief information officer saying that technology advances allowed its employees to work at the “speed of thought.”

It also reported that Chesapeake Energy was betting on these new supersize wells as part of its “turnaround strategy.” Chesapeake needed to “turnaround” from losing money and move in the direction of profits.

In June 2017, investment website Seeking Alpha trumpeted “The Arrival of Super-Laterals” as a technological accomplishment for the shale oil industry. (“Laterals” are the industry term for the horizontal wells used in the fracking of shale oil and gas). That article featured Chesapeake Energy’s new achievements in drilling longer lateral wells.

But supersized wells weren’t the only solution for keeping shale drillers from losing more money. Another was more wells per drilling pad. A year ago shale company Encana announced plans for “cube development,” in which it would drill 64 wells on one gargantuan drilling site in the Permian oil fields of West Texas.

The same thing was happening in the Marcellus Shale in Pennsylvania, where top natural gas producer EQTCorporation had plans for drilling 40 wells per pad. The company recalled the early days of fracking when drilling three wells per pad was seen as a significant breakthrough. As the Pittsburgh Post-Gazette reported at the time, the higher number of wells per pad required “creative geometry,” which “ensures that the wells don’t crowd each other underground.” 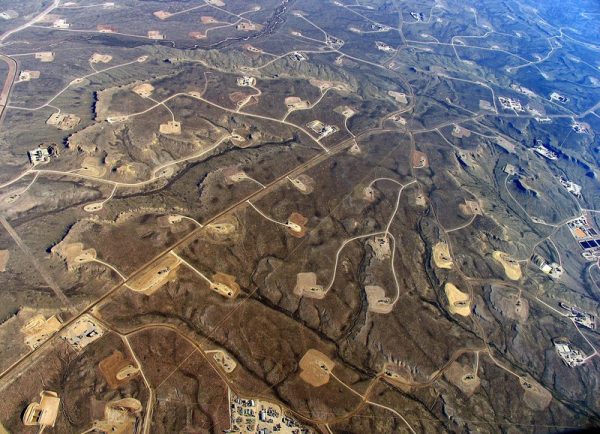 The Post-Gazette also quoted Dave Elkin, a senior vice president of asset optimization at EQT, touting the ever-increasing lengths of horizontal wells, as saying the “economic and technological limit” for those in the Marcellus Shale was 21,000 feet, or just shy of 4 miles.

With more advanced technology delivering longer horizontal wells and creative geometry packing them into smaller areas, profits seem like the next logical step.

But Fracking 2.0 was a financial disaster, and shale drillers’ desperate attempts to make money any way they can is coming back to haunt them in a big way.

EQT did indeed drill the longest wells but also lost a lot of money in the process. According to the Wall Street Journal, “The decision to drill some of the longest horizontal wells ever in shale rocks turned into a costly misstep costing hundreds of millions of dollars.”

EQT started 2019 with a round of layoffs. Chesapeake’s supersized wells meant that in 2018 the company spent $600 million more than it made to produce oil and gas.

But that wasn’t the really bad news for the fracking industry, which was learning that its “creative geometry” was mostly creating losses. Encana — the company with the super pad of 64 wells — also announced layoffs. In a letter to the Texas Workforce Commission, Encana said, “The company intends to gradually separate employees between now and May 31, 2019,” moving from creative geometry to creative ways of describing layoffs.

And while those are just three companies that tried to push the limits of fracking technology, the issue of packing too many wells on the same pad could greatly alter the economics of the fracking industry. As I wrote in August 2018, when oil and gas wells are too close to each other, the fracking process can damage nearby wells — a process known as “frac hits.” The result can cost drillers money and greatly reduce the amount of oil they can pump from these wells.

Two years after its Fracking 2.0 story, the Wall Street Journal published one titled, “Shale Companies, Adding Ever More Wells, Threaten Future of U.S. Oil Boom.”  The article details how packing too many wells on a drilling pad is “turning out to be a bust.”

Problems with the strategy of bunching wells close together mean some of the more optimistic projections for oil production from shale regions may have to be lowered. https://t.co/LC29gXA1yj

According to the Journal, this reality could lead to an “industrywide write-down if they are forced to downsize the estimates of drill sites they have touted to investors.” For a highly leveraged industry on a decade-long money losing streak, that isn’t good news.

Industry analysts at Wood MacKenzie started to warn about the limits of technology‘s ability to deliver more oil in the Permian in 2017. In the Wall Street Journal, Robert Clarke, research director at Wood Mackenzie, said, “Unless there is a massive technological breakthrough, those child wells are going to be smaller.” Child well is the industry term for the multiple wells drilled on a pad around the first “parent” well.

Once again, unless technology can change the financial equation, the fracking industry is in trouble.

Fracking 3.0: Exxon Bets on Microsoft to Solve the Problem

Despite the past financial disasters and failure of new technology to deliver profits for frackers, the oil industry’s biggest players are now getting in on the game in the prolific Permian oil fields. And the solution to fracking’s profits problem — according to the likes of ExxonMobil — is Microsoft. Apparently cloud technology has been the missing ingredient in the Permian.

In the past week, Exxon and Chevron have both announced plans for major investments in the Permian Shale, which they promise will deliver large increases in both oil production and profits.

Much like in 2017, current headlines have been touting Exxon’s plans and its partnership with Microsoft to use technology to finally figure out how to make money fracking in the Permian.

It appears to be an effective public relations push by Exxon — which was much needed. A year ago Exxon’s poor financial performance was linked to its failure to make a big move into fracking shale for oil. At the time, CNN wrote, “ExxonMobil missed the invitation to America’s big oil party.”

While this latest promise of profits from fracking now has some of the world’s largest companies behind it, these plans are nothing more than a press release at this point. Which makes this a good time to revisit when Exxon made a big move into natural gas in 2010. Exxon bought natural gas producer XTO for $40 billion, and while the U.S. is producing record amounts of natural gas in 2019, this deal is viewed as one of the worst in the history of the energy industry.

“That was one of the worst acquisitions in the history of the energy business. It was exquisitely poorly timed,” Pavel Molchanov, an energy analyst at Raymond James, told CNN in 2018.  “…It was essentially $40 billion down the drain.”

Perhaps Exxon’s big move into shale oil won’t repeat history, and the oil giant will finally unlock the secret to profits while fracking for shale oil with improved technology.

For some perspective, however, it helps to look at how EOG — the “Apple of oil” — is doing these days.

For that, let’s turn to Art Berman, a leading industry analyst with a strong track record on many aspects of fracking for oil and gas. In February he published an analysis showing that 2015 was the best year for EOG’s well performance for its Eagle Ford wells in Texas and that 2018 might be the worst.

Technology apparently isn’t delivering great results for the “Apple of oil” — but perhaps Microsoft has the answers.