Lambert: I’m not sure that a “social elevator” is the metaphor I find most appealing for redistribution. How about one of those little folding stepladders that you see in kitchens?

The ‘yellow vest’ demonstrations in France appear, at least in part, to be another example of the anti-globalisation sentiment that has emerged in a number of OECD countries. This column argues that the movement is also rooted in the country’s broken social elevator. Redistribution through taxes and social transfers is not sufficient to curb the inequality in opportunity, which is mostly linked to the educational system and perpetuates economic and social situations from one generation to the next.

The recent ‘yellow vest’ demonstrations in France could well be simply a variant of the regional and social divides potentially linked to the same trend towards a rejection of globalisation that has emerged in a number of OECD countries (Pastor and Veronesi 2018, Rodrik 2017). That is probably partly true, but the reasons for this movement are also rooted in a profound inequality of opportunity (OECD 2018). It takes more than six generations in France for a person at the bottom end of income distribution to reach the mean. More than 15% of 15-year-olds have poor numeracy and comprehension skills, which are likely to lead to difficulties in finding work later. Of all the OECD countries, only Hungary shows more social determinism than France. 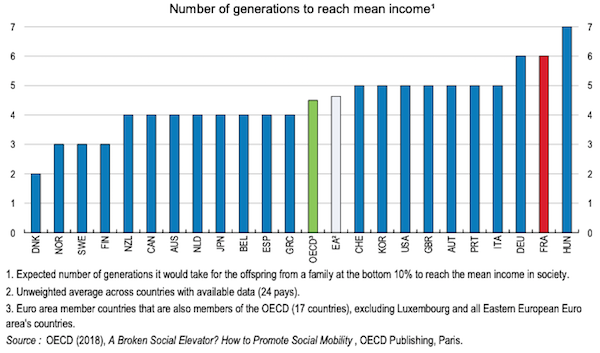 Contradicting the oft-repeated assertion, France suffers not from insufficient income redistribution but from an inequality of opportunity that perpetuates economic and social situations from one generation to the next. In other words, the social elevator is broken and has been for some time. That inequality of opportunity hits not only the poorest – it also to some extent affects the middle classes.

Disparities between socio-professional categories and regions take root at a very early age. Although much early childhood education and care is provided through the social system and with state support, only 30% of children in the least well-off third of the population benefit from ‘formal’ childcare services (nurseries, daycare or qualified childminders), compared with nearly 60% for the population as a whole. It is partly a question of access – such services are more or less well-developed depending on the municipality or neighbourhood. Yet they are important factors in a young child’s early learning, development, and socialisation.

The disadvantages of a low-income socioeconomic background persist at school. The OECD’s PISA studies assess the educational performance of 15-year-olds. The studies show that 15% of schoolchildren in France have low skills in reading comprehension and mathematics, one of the highest rates across OECD countries. They also show that the level of influence of social background on educational attainment is one of the highest among OECD countries. This is particularly true in mathematics, a subject which, as is well-known, has a considerable effect in France on access to the best educational opportunities. Here again local differences play a significant part, since it is more difficult to attract experienced teachers to some schools and some geographical areas concentrate pupils in difficulty. 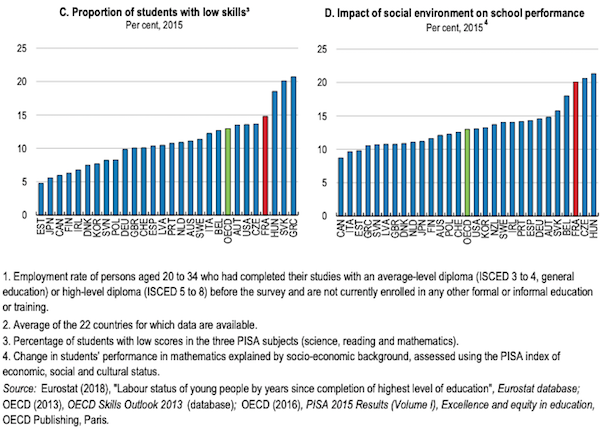 Differences in educational level affect access to employment. The proportion of young people not in education, employment or training (NEET) in France is higher than the EU average. Access to employment differs considerably according to level of qualification, and the premium for the most highly qualified is significantly higher than elsewhere. The employment rate of those leaving the educational system with an average general-education diploma (secondary or non-higher post-secondary) is 51%, one of the lowest in the EU (only Italy and Greece score worse). In contrast, the employment rate for higher-education graduates is 83%, close to the EU average.

These differences in access to employment are persistent, not least because the lifelong learning system fails to remedy them among the low-skilled. The high proportion of low-skilled young people persists from one generation to the next and the proportion of low-skilled adults is also one of the highest in OECD countries – France ranks fifth among countries where adult skills are lowest as measured by PIAAC, the OECD’s adult skills survey. This is not corrected by access to training. First, the low-skilled are 50% less likely than others to have access to training. Second, the rate of participation in formal training in the array of available lifelong learning options is again one of the lowest among OECD countries. Recent reforms are seeking to change this situation, but much remains to be done. While recent one-off plans have helped to give the unemployed access to training, the same does not apply to the inactive. 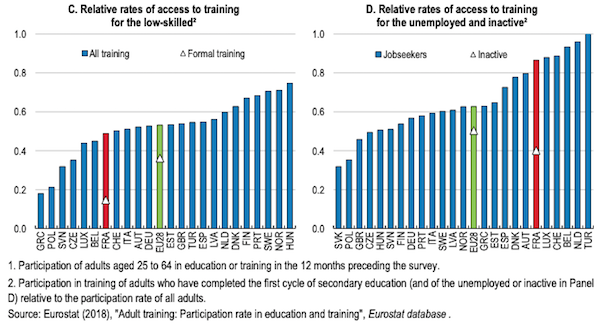 Income gaps reflect disparities in access to employment and in taxation. In France, the income of the poorest 20% of the population, as well as the median disposable income, did not increase between 2008 and 2016. The targeted reduced rates of social security contributions may have significantly lowered the cost of labour for those on the minimum wage, but those contributions continue to weigh heavily on the median wage. Employers’ contributions as a proportion of gross wages are very low for the minimum wage (4% after the latest reductions), but rise to 36% for the median wage, a unique gap among OECD countries. Although this helps to provide welcome support for low-skilled jobs, it probably also holds back the increase in income between the minimum and the median wage, which may partly explain why there has been little gains in the purchasing power of the low-paid.

Figure 4 Income inequalities are tempered by taxes and social transfers Substantial housing costs add to these income disparities. Housing costs are a major item of basic household expenditure, and housing as a share of household consumption in France is higher than the European average. Again, a substantial social housing stock and significant housing benefits help to correct this for the least well-off households. Not all such households receive them, however, and middle-class households even less so.

Redistribution through taxes and social transfers is a powerful way of reducing income inequality but substantial inequalities of opportunity remain, mostly linked to the educational system. Redistribution supports the standard of living of the poorest households but fails to correct disparities in the middle of the distribution range. Above all, it is not sufficient to curb inequality of opportunity linked to socioeconomic background or territorial inequalities. The urgent need to give everyone a chance to succeed will require reform of the education system to ensure that through education and training every child has an opportunity to advance, from early childhood and throughout his or her life, and that every adult who has missed a step can catch up. The next OECD survey of France, to be published in April, will contain recommendations along those lines.

References at the original.