Last night, I saw some images from this year’s flooding in the Midwest float by, and I remembered my grade school classes on FDR, and that the New Deal actually had a significant flood control component. So I thought I would recapture a little bit of that history, and then put the Green New Deal (here; here) in that context. Spoiler alert: Problematic. First, I’ll survey the scale and scope of the flooding, then I’ll look briefly at the New Deal flood control programs, and finally I’ll look at the Green New Deal (“DRAFT TEXT FOR PROPOSED ADDENDUM TO HOUSE RULES FOR 116TH CONGRESS OF THE UNITED STATES“).

Here is a handy map of current flooding from the the United States Geological Survey. As you can see, there’s rather a lot of it: 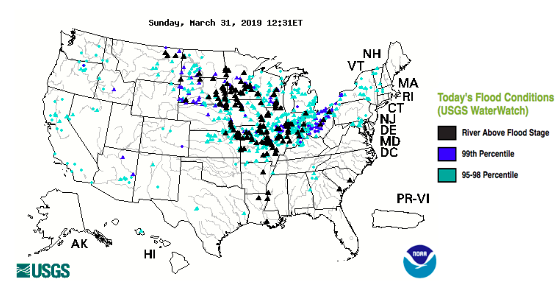 Weather Underground describes the causes of the flooding:

The flooding was triggered after an intense “bomb cyclone” pushed strong winds, mild temperatures, and heavy rain across frozen, snow-covered ground on March 12-14. The result was a flash melt that clogged rivers and streams with huge ice chunks and massive amounts of water. The cyclone itself also caused widespread wind damage and blizzard-related impacts.

And Grist describes the effects. In fact, it’s not just the Midwest:

The record-breaking flooding disaster in the Midwest is just beginning.

On Thursday, the National Weather Service issued its annual spring flood outlook, and it is downright biblical. By the end of May, parts of 25 states — nearly two-thirds of the country — could see flooding severe enough to cause damage.

Pretty much every major body of water east of the Rockies is at elevated risk of flooding in the coming months, including the Mississippi, the Red River of the North, the Great Lakes, the eastern Missouri River, the lower Ohio, the lower Cumberland, and the Tennessee River basins.

“This is shaping up to be a potentially unprecedented flood season, with more than 200 million people at risk for flooding in their communities,” said Ed Clark, director of NOAA’s National Water Center, in a press release. That represents about 60 percent of all Americans.

The midwestern floods join the lengthening list of unprecedented and unexpected natural disasters accelerated and made worse by climate change. And, just like other climate events that have caused widespread damage, our planning, resiliency, and flood insurance programs are ill-equipped to cope.

There is, naturally, a lot of flood imagery (Discover, Vox) but the photograph that really struck me was this one: 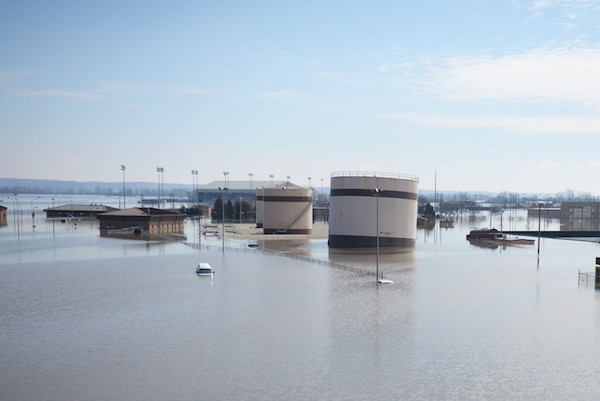 That’s Offut Air Force Base, headquarters of the Strategic Air Command[1]. If there’s a better symbol of our society’s inability to mobilize against climate change — even in its own terms! — I have a hard time thinking of it.[2] Now let’s turn to how FDR mobilized the United States, back in the Age of Steam, when dinosaurs roamed the earth.

From the Roosevelt Institute, writing of the Midwest flooding in 2011 — [breaks out calculator] — eight years (or two presidential election cycles) ago:

Interestingly, 75 years ago the United States faced a very similar natural disaster in the form of the Great Flood of 1936. Unlike today, however, the death and destruction that struck much of the eastern United States as a result of the flood spurred Congress into action. It passed of one of the most significant — though lesser-known — pieces of legislation to come out of the New Deal: the Flood Control Act of 1936.

Recognizing for the first time “that destructive floods upon the rivers of the United States constitute a menace to national welfare” and that “flood control on navigable waters or their tributaries is a proper activity of the Federal Government in cooperation with States,” the Roosevelt administration worked with members of Congress to pass the first piece of legislation to provide for national flood relief. The hundreds of reservoir, levee, and channelization projects that resulted from the 1936 act protected millions of acres of farmland, saved countless lives, and literally changed the face of the nation. Taken together, the projects that came about as a consequence of the act constitute one of the largest additions to our nation’s economic infrastructure, on par with the development of the nation’s highway system. Moreover, in keeping with the spirit of the New Deal, the construction of many of these flood control projects (which usually took place under the auspices of the US Army Corps of Engineers) also spurred local and regional economic growth and helped conserve one of our nation’s most precious resources — our soil.[3]

These New Deal flood control public works[4] projects were quite extensive. From the interactive map at the wonderful Living New Deal site: 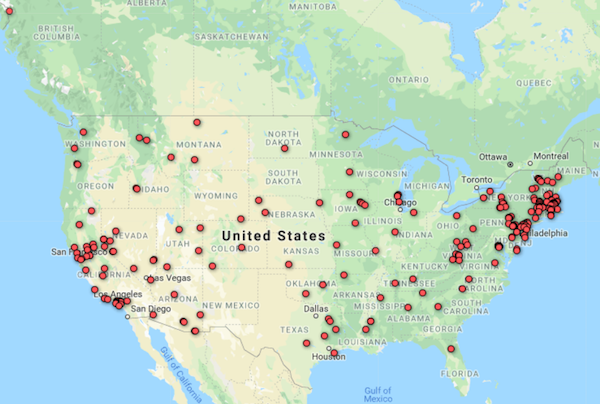 And from the same site, I pick at random one such project: The Breakheart Reservation in Saugus and Wakefield, Massachusetts, now on the National Register of Historic Places. A photo: 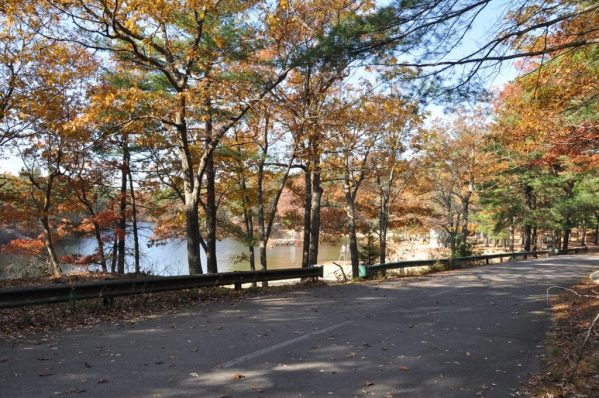 The CCC conducted extensive work on Breakheart Reservation to turn it into a public park. From the Friends of Breakheart Reservation website: “[H]undreds of men lived and worked here, paid $30 a month, out of which they kept $5 and sent the rest home to their families. It was the CCC who helped develop this land into a recreational area with bridle paths, trails, and picnic areas.”

From Wikipedia: “In 1934 the executors for Johnson and Clough sold the Breakheart Hill Forest to the Metropolitan District Commission for upwards of $40,000. The MDC then turned the land over to the Civilian Conservation Corps. Over the course of six years, the CCC built roads and trails, planted trees, and restored the dams at Upper Pond and Lower Pond. The CCC’s efforts resulted in the return of wildlife that had become rare in Breakheart, including beavers, fishers, coyotes, blue herons, and owls. Breakheart was opened to the public in 1936.”

So the public has been benefitting from this New Deal public works flood control project for — [breaks out calculator again] — 83 years. Not to mention the “beavers, fishers, coyotes, blue herons, and owls,” all of whom are in their own ways helping to keep the biosphere in balance. And the same goes for all the other projects on that map.

Now, with a New Deal track record like that — not to mention an ongoing series of flooding disasters in the midwest, dating back to at least the pre-Obama era, in 2007 — you might think that the Green New Deal, well, learned from history and included flood control with its project scope. No such luck:

(6) SCOPE OF THE PLAN FOR A GREEN NEW DEAL AND THE DRAFT LEGISLATION.—

eliminating greenhouse gas emissions from, repairing and improving transportation and other infrastructure, and upgrading water infrastructure to ensure universal access to clean water;

No matter how hard you squint, “clean water” is not flood control. The omission is especially curious, given the next section:

B) The Plan for a Green New Deal (and the draft legislation) shall recognize that a national, industrial, economic mobilization of this scope and scale is a historic opportunity to virtually eliminate poverty in the United States and to make prosperity, wealth and economic security available to everyone participating in the transformation. In furtherance of the foregoing, the Plan (and the draft legislation) shall:

It’s hard to see how “rural” residents whose homes (and farms and businesses) are literally underwater aren’t “front-line communities” “affected by climate change,” and why they don’t get a bullet point of their own under “(6) SCOPE OF THE PLAN,” especially, again, considering the success of the flood control efforts of the original New Deal. Now, I have always viewed the GND as “a plan to have a plan” — not a bad thing, an essential thing — but that the initial state did not, apparently, include input about a major concern from the Midwest is very concerning. My suggestion to GND advocates is that if they want to be seen as working for all Americans — no doubt a good thing with another “change” election coming up — that they remedy this omission tout suite. Frankly, I expected to see this material included in the “Draft Text,” and was mildly shocked when it wasn’t.

[2] The photo caption is wonderfully dry: “A personally-owned vehicle sits in flood waters March 17, 2019, at Offutt Air Force Base, Nebraska. In the wake of base flooding, the 55th Wing Legal office is offering assistance with claims. (U.S. Air Force photo by Tech. Sgt. Rachelle Blake).” From the body of the article: “‘The legal office is here to take care of the whole base and their legal needs and helping people become financially whole after a disaster is part of that,’ said Capt. Joline Y. Doedens-Combs, 55th WG assistant staff judge advocate.” Unlike most, I would think.

[3] We also learned about the New Deal and soil in grade school, and that might be a suitable topic for a later post.

Two caveats I didn’t find a place for:

First, I’m aware that the New Deal flood control projects are not entirely unproblematic, especially stream channelization. My point is that the New Deal mobilized the country, contrasted with our own curious inability to do.

Second, the focus of the GND is “greenhouse gases,” not saving the biosphere as such; therefore, one might not expect water (or soil) to figure largely, as they did in the original New Deal. Intuitively, I feel that is a mistake; we cannot, for example, envision using a re-prairied Midwest as a carbon sink without thinking about soil and water. Ditto reforestation.