Yves here. Even though most readers have likely spent enough time in large organizations to be able to vouch for the validity of the Peter Principle, the plural of anecdote is not data! It’s useful to see a little study prove out what I anticipate is widely-shared experience.

Of course, the factor that keeps Peter-Principle-type behaviors going despite the fact that more senior management ought to know better is perceived fairness. How can you not promote the best salesman, or coder, or field inspector, when not promoting the best one will demotivate their peers by showing that management doesn’t appreciate doing your job well?

In 1969, Laurence Peter and Raymond Hull published The Peter Principle, proposing a farcical theory of organisational dysfunction. The Peter Principle, they explain, is that organisations promote people who are good at their jobs until they reach their ‘level of incompetence’. Fifty years later, Peter and Hull may find plenty of examples of people who occupy important managerial positions because of success in some radically different arena.

In principle, there’s nothing wrong with putting successful people into the highest positions. If the best basketball player makes the best coach, then a coaching position may be the best way to magnify that person’s talents. Similarly, if success in movies or real estate translates into success in governing, then the biggest moguls should occupy the highest offices.

The crux of the Peter Principle is that success in one arena doesn’t necessarily translate to the next, though promotion decisions are often based on a worker’s aptitude in their current position, rather than the one he or she is being promoted to perform. It’s no wonder that the Peter Principle is especially well-known in technical fields – from engineering, medicine, and law – where cases of poor managers who were once excellent individual contributors abound.

If it is accurate, then the Peter Principle bodes poorly for organisations, in light of a growing body of research documenting the important role that good managers play in building and sustaining productive organisations. Lazear et al. (2015), for example, find substantial variation in the quality of individual bosses, with the best bosses increasing the output of their subordinates by more than 10% relative to the worst bosses. Similarly, Bloom and Van Reenen (2007) show that variation in management practices can explain much of the overall variation in firm productivity across countries. These papers suggest that firms face potentially large productivity losses when they promote workers who lack managerial ability.

Empirical Evidence on the Peter Principle

In our research, we examine the extent to which firms promote workers who excel in their current roles, or whether they promote those who have the greatest managerial potential (Benson et al. 2018). Using data on worker- and manager-level performance for almost 40,000 sales workers across 131 firms, we find evidence that firms systematically promote the best salespeople, even though these workers end up becoming worse managers, and even though there are other observable dimensions of sales-worker performance that better predict managerial quality.

We study salespeople for two main reasons. First, it is a classic setting in which the confidence, charisma, and persistence it takes to be a good salesperson are different from the leadership, strategic planning, and administrative skills it takes to manage sales teams. Second, the sales setting allows us to measure individual performance both as individual contributors and as managers. 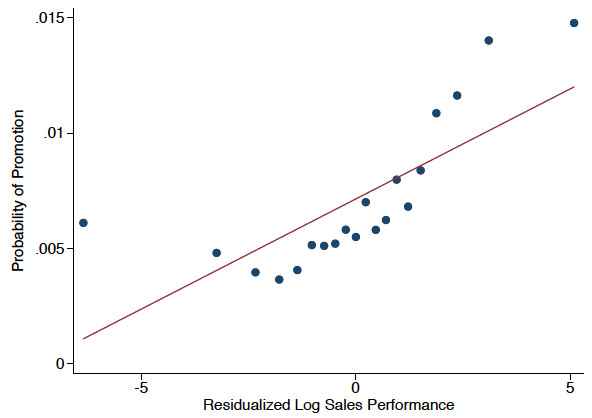 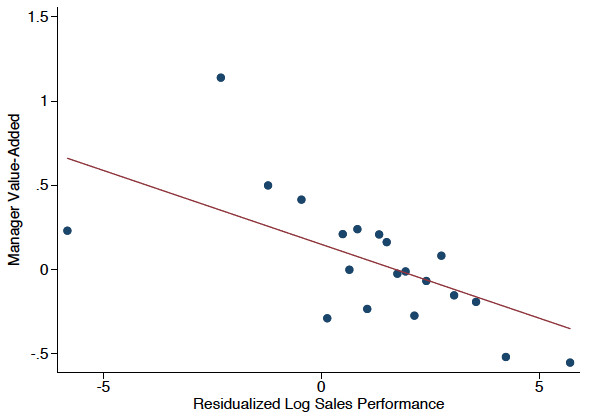 Figure 1 illustrates our main empirical finding. Perhaps unsurprisingly, we find that sales performance is highly predictive of promotion. This can be seen in the top panel of Figure 1: a worker’s likelihood of promotion steadily increases with higher sales performance in the prior year. A worker who sells twice as much as a colleague is about 15% more likely to be promoted in that month.

This simple fact need not be evidence of the Peter Principle – if the best sales workers also make the best managers, then there is no contradiction between promoting the best worker and the best potential manager. What is striking, however, is that – among promoted managers – pre-promotion sales performance is actually negatively correlated with managerial quality. A doubling of a manager’s pre-promotion sales corresponds to a 7.5% decline in manager value added; that is, workers assigned to this manager will see their sales increase 7.5% less than workers assigned to the manager who was a weaker salesperson.

We show that this pattern is likely driven by the fact that firms hold high and low performing sales workers to different standards when making promotion decisions. This is illustrated in Figure 2, which shows the estimated manager value-added of managers who were just barely promoted. The quality of these marginally promoted managers tells us about the promotion standards that firms apply to different types of workers: if a firm will only promote a low-sales worker if she has exceptionally high managerial potential, then the marginally promoted low-sales worker is likely to make a great manager. Similarly, if a firm will promote high-sales workers even when they are unlikely to be good managers, the managerial quality of the marginally promoted high sales worker will be quite low. Figure 2 shows that, indeed, top salespeople appear to be held to lower standards. In essence, whether they know it or not, firms appear to be discriminating in their favour when making promotion decisions. 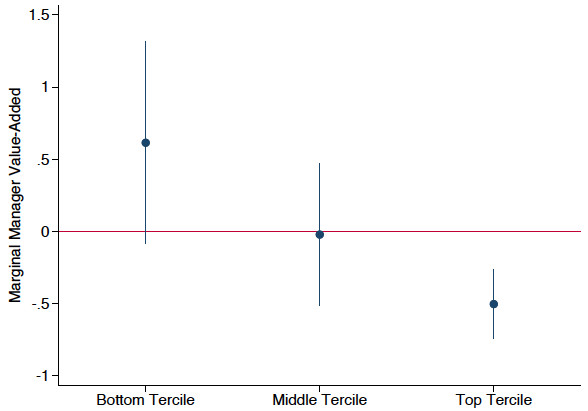 By contrast, we identify another measurable worker attribute – teamwork experience – that firms can use to predict managerial potential. We observe teamwork experience by looking at how credits for a single sale are shared amongst workers. Sales workers with more team experience are those who collaborate more frequently on a given sale, for instance by generating a sales lead and then passing it on to a colleague, or by maintaining contracts initiated by others. We find that firms are not more likely to promote workers with more teamwork experience, even though these workers tend to make better managers once promoted.

Lessons for Firms and Managers

So why might be firms be doing this, especially since the Peter Principle is a widely known phenomenon among managers? We provide evidence that the Peter Principle may be the unfortunate consequence of firms doing their best to motivate their workforce. As has been pointed out by Baker et al. (1988) and by Milgrom and Roberts (1992), promotions often serve dual roles within an organisation: they are used to assign the best person to the managerial role, but also to motivate workers to excel in their current roles. If firms promoted workers on the basis of managerial potential rather than current performance, employees may have fewer incentives to work as hard.

We also find evidence that firms appear aware of the trade-off between incentives and matching and have adopted methods of reducing their costs. First, organisations can reward high performers through incentive pay, avoiding the need to use promotions to different roles as an incentive. Indeed, we find that firms that rely more on incentive pay (commissions, bonuses, etc.), also rely less on sales performance in making promotion decisions. Second, we find that organisations place less weight on sales performance when promoting sales workers to managerial positions that entail leading larger teams. That is, when managers have more responsibility, firms appear less willing to compromise on their quality.

Our research suggests that companies are largely aware of the Peter Principle. Because workers value promotion above and beyond a simple increase in salary, firms may not want to rid themselves entirely of promotion-based incentives. However, strategies that decouple a worker’s current job performance from his or her future career potential can minimise the costs of the Peter Principle. For example, technical organisations, like Microsoft and IBM have long used split career ladders, allowing their engineers to advance as individual contributors or managers. These practices recognise workers for succeeding in one area without transferring them to another.