Jon Stewart as Biden: “Hey girl, you seem tense. Is it the stress of me groping you for 28 straight seconds?”

An interesting thing is happening around Joe Biden’s #MeToo moment. Even though Al Franken was almost immediately rousted from the Senate by now-presidential candidate Sen. Kirsten Gillibrand and others for unwanted touching and kissing, handsy kissy Joe Biden is being held to a very different standard. Why?

Let’s start with Kirsten Gillibrand’s reaction. Recently I asked, “Does Kirsten Gillibrand Consider Joe Biden’s Behavior ‘Disqualifying’?” We now have an answer. Here’s Gillibrand on Hardball speaking with Chris Matthews (link; skip to 4:38 to listen to the entire Biden conversation). When Matthews asks “What should he do?” Gillibrand responds (my emphasis):

Gillibrand: Well you know, Chris, [sexual assault] is something I’ve taken very seriously over the last seven or eight years, fighting against sexual assault in the military, sexual assault on college campuses, and actually changing the rules in the House and Senate on harassment, so I think with these allegations specifically, I think it’s something if Vice President Biden intends to run, he’s just going to have to address directly with the American people.

And there you have it: Even though I’ve made it my brand to care about sexual assault, Biden can stay in the presidential race, so long as he explains himself. She continues with this:

Matthews: What should he say?

Gillibrand: There’s a conversation about do we value women. And when you allow the space for women to tell their truth and what they experienced, you have to not only receive and believe them, you have to investigate.

Think back to Franken, who was forced out “without any real vetting of the allegations facing him,” as Politico put it. Apparently, the “you have to investigate” rule applies only to Biden. Quite the inconsistency.

So Matthews asks about Gillibrand’s position on Al Franken relative to her position on Biden. Gillibrand says the cases were very different because “there were eight credible allegations corroborated in real time” against Franken (whatever “real time” means). Then she repeats what she’s said many times, that she needed to not “stay silent” about the Franken accusations because she had a duty to make sure her sons knew that “it’s not OK to grope a woman anywhere on her body without her consent” (emphasis added).

This is a good time to watch the clip above. Not the Sam Bee part; the uncomfortable-to-watch Biden-groping-women part. Clearly some of those people do not consent.

Matthews: Should he quit?

Gillibrand: It’s something he’s going to have to talk about and understand what’s happening….

Matthews: Do you call on him to leave the race?

Gillibrand: No, I do not, and what I’m saying now is that it’s something he’s going to have to address. And the truth is, we as a country have to decide if we value women at all.

Read the two sentences immediately above. This is beyond shameful, and way beyond stupid. Does she think no one has ears?

Gillibrand is not the only Democrat to come to Biden’s rescue. Nancy Pelosi: “I don’t think it’s disqualifying.” Sen. Tammy Baldwin: “There’s a failure to understand how one’s actions impact others.” Sen. Jeanne Shaheen: “I was surprised by the allegation…. All of us, including the vice president, need to continue to work on changing our culture.”

From all of this, the path to forgiveness for Biden is clear: Say you “understand” and move on. The voters may not forgive him for his misdeeds, but the leaders of the Democratic Party already have.

Which leads us to ask, why is Biden so well defended by Party leaders and insiders? The reason most often offered is “it’s generational.” Let’s call this Explanation 1.

Here’s how EJ Dickson put it in Rolling Stone:

To an extent, this line of debate [“I don’t think it’s disqualifying”] is to be expected from old-school, establishment Dems like Feinstein and Pelosi, who have clear-cut reasons for standing behind a peer like Biden. But their refusal to outright condemn his alleged behavior is also representative of a generational gap in the #MeToo movement, between those who take quote-unquote “less egregious” violations seriously, and those who do not. Although the allegations against Biden are not of a criminal or even overtly sexual nature, they still involve the issue of consent, and whether or not a man invading a woman’s personal space qualifies as a career-ending transgression.

While these survey results didn’t differentiate between older and younger women specifically, anecdotally, many younger women report a stark contrast between their own views and the views their mothers and grandmothers share on the movement. In a Time piece on the so-called #MeToo generational divide, a 25-year-old woman says that “the women in my generation have been drawing a much harsher line for anything they consider even slightly inappropriate,” while her mother is quoted as saying that she believes Gen Y and Gen Z feminists like her daughter “are losing the high ground and allies through their absolutism.” Similarly, when discussing the allegations against Biden with her mother, a friend told me that her mother had responded “exactly the way I thought she would”: by saying, “’I think men of that age just do that and don’t mean it to be weird or sexual’” (essentially, the Feinstein/Pelosi school of thought toward inappropriate workplace conduct).

Shorter Rolling Stone: “The rules have changed for younger women.” (Note the element of criticism of this view in the article as this view: “Gen Y and Gen Z feminists like her daughter ‘are losing the high ground and allies through their absolutism.'” In other words, holding men to this standard is a mistake.)

Explanation 2, He’s Our Only Hope

The “it’s generational” may explain some voters’ responses to Biden, but I don’t think it explains the defense of Biden we’re reading about. Note that most of his defenders inhabit the same corner of the world — they are people with power and influence in the Democratic Party and their strongest supporters within the media.

Reaction from those who are less Party-aligned has been more mixed. The Atlantic: “Don’t Defend Him as a Flirt.” Gawker: “Joe Biden, We Need to Talk About the Way You Touch Women.” Even the New York Times: “He is a product of his time, but that time is up.”

So why the defense coming from Party officials? The Gawker piece linked above provides a hint: “Try this,” Sam Biddle writes, “look at all of those photos and imagine, say, Paul Ryan’s face instead of Biden’s.”

So let’s be plain. We’re coming into the 2020 election season and on the Democratic side there’s a lot at stake — in effect, control of the Democratic Party itself from its very top.

As he did in 2016, Bernie Sanders is threatening a palace coup, a takeover of the Party that bypasses all the layers below the presidency — the Speaker’s chair, Senate caucus leadership, chair of the DNC, all of it. As the Party’s presidential candidate, he will have nominal control of the levers of Party power. As president he will have as much control of the country as he wishes to exercise, even if the leaders of both parties try to block him.

In the past, progressives — and by that I mean real reformers in the Bernie Sanders mold — have been remarkably ineffective in their own #resistance to Party leadership. At every turn, in every local election through 2016 and into 2018, every contest that threatened to put an actual progressive in power was fought bitterly by Party leadership via their control of the donor network, the DCCC, the DSCC, and their allies in other institutions of mainstream Party power, including the media. Some of these resistance candidates succeeded, a great many did not.

The single strongest breakthrough occurred in 2018, when a small group of aggressive progressives, reformers like Occasio-Cortez and others, defeated Party-approved candidates then showed themselves capable as a group of challenging its leaders on their own turf — from inside the halls of power.

Thanks to those victories and their continued opposition to leaders, progressive office-holders have gained some momentum, but not nearly enough. The Green New Deal is now a “thing” being discussed by voters, as is Medicare For All. But the pushback by Nancy Pelosi and other entrenched Party leaders has been fierce, corrupt and underhanded. Even Barack Obama is getting into the act. Even with a Democratic Senate, neither of these proposals is likely to be enacted soon.

The message in all this to progressives is simple: Don’t threaten the status quo. The reason: The status quo enriches and empowers us.We’re inside and you’re not. We mean to stay in charge. Go away.

Seen this way, a Sanders or Warren presidency threatens forty years of entrenched, neoliberal, insider-led and inbred Party power, the very power a great many voters want freedom from, if only they could manage it. 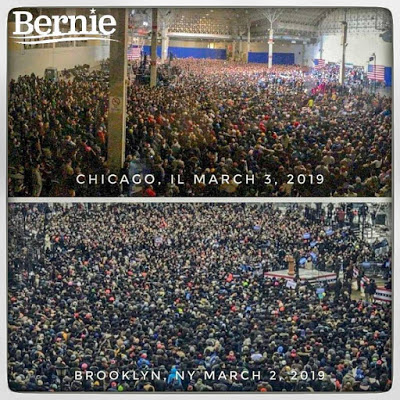 So where is Joe Biden in all this? If you examine all of the Democratic presidential candidates (including Biden himself, who hasn’t declared yet), they fall neatly into two groups — those opposed to the Obama-era status quo, rebels or “change” candidates; and those whose future depends on returning to that status quo, “faux-change” or “no-change” candidates. If you’re a “change” voter this time around, none of the non-rebels is even close to a choice, at least in the primary.

Beto O’Rourke? He wanted to cut Social Security. Kamala Harris? She sent poor mothers to prison because their kids skipped school. Pete Buttigieg? He’s an “all lives matter” kind of guy. Also this. Joe Biden? There’s too much wrong with him to begin to list.

It should therefore be obvious that mainstream Party forces badly need a “Sanders (or Warren) stopper” — or, to borrow their own language, a kind of “Sanders killer“: As Axios writes, “One prominent [Biden] backer thinks Biden will run, and ‘is ready to kill Bernie.'”

If you accept all this, now consider the polling: 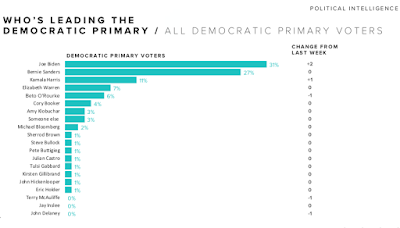 One can almost hear their cries: “Who will save us from these meddlesome candidates?” The choices, at least so far, aren’t promising. To date the only person positioned to knock off Sanders, or Warren should she surge, is Joe Biden. Kamala Harris, the nearest to either, is polling a quarter of what Sanders is polling, with the rest of the field well behind her.

Joe Biden, it would seem, is their strongest hope, perhaps their only one.

Are mainstream Democrats protecting him for that reason? From their lockstep defense of him, and the genuinely existential threat they face in the next election, I’d bet on it.

If you doubt me, put Bernie Sanders’ face on those Biden photos — and imagine what Nancy Pelosi would be saying then.