More than ten years on from the start of the Global Crisis, policymakers are discussing the effectiveness of the global financial safety net – the combination of reserves, central bank swap lines, regional financial arrangements, and the IMF. This column evaluates the effectiveness of the use of IMF support and foreign reserves in globally driven crises. It finds that actual use of IMF support helps during currency crises – the type of crisis for which the support was originally designed. Use of reserves is of limited effectiveness and only during sudden stops.

More than ten years since the start of the Global Crisis, policymakers are still discussing whether the international financial architecture has evolved for the better. Only recently, in October 2018, an Eminent Persons Group (EPG) of accomplished experts in international governance delivered a report to the G20 on how to reform global financial governance (EPG 2018). One key concern, frequently mentioned in the debates of the G20 during the last years, is that as the international financial architecture has become more multipolar, it has also become ‘patchier’ (Denbee et al. 2016, EPG 2018).

In the view of many policymakers, this development – for example, the accumulation of reserves for use in times of stress (Aizenman and Lee 2008, Aizenman and Sun 2012) or the advent of new players, such as regional financial arrangements (RFAs) – is worrisome, because not all countries may be equally covered by the multipolar elements of global crisis insurance. This makes the global financial safety net – as the combination of reserves, central bank swap lines, regional financial arrangements, and the IMF is known – less effective, or so the argument goes.

However, assessing whether this is really the case is not straightforward. For one, it is difficult to measure whether a macroeconomic outcome after a crisis has been caused by the use of the global financial safety net or has materialised despite its use. For another, the elements of the global financial safety net have been designed for different purposes and their effectiveness therefore needs to be measured against their stated purpose. They may be used as substitutes or as complements.

Our results indicate that the issue with the global financial safety net is not about its being patchy, but about using the appropriate tool for different types of crises. In particular, we find that actual use of IMF support helps during currency crises—the type of crises for which IMF support had been originally designed. Use of reserves is of limited effectiveness and only during sudden stops. We do not find evidence for a deterrence effect of either higher potential access to the IMF or high holdings of reserves.

The message from theory is more ambiguous than one could have expected. We develop a simple model of a small open economy faced with a constraint limiting its international borrowing to smooth consumption and finance imported inputs. We show that global financial safety net access (which loosens the constraint) and use (which provides the country with additional resources) have an unclear impact on output, in particular depending on whether they are temporary or persistent. This is because the horizon over which the global financial safety net tools apply impacts the path of borrowing for smoothing reasons, which is mirrored in the ability to borrow to finance imported inputs. The absence of a clear-cut conclusion from theory makes it even more compelling to carry out an empirical analysis, although this is also fraught with difficulties.

Simply considering how growth and inflation evolved after sudden stops is not adequate. Investors are indeed likely to pull back from a country which is about to experience a weak growth spell for reasons that have nothing to do with capital flows as such. To get around this issue of reverse causality, we first identify capital flow episodes that are globally driven. Gyrations in the global financial cycle have been identified as a major driver of capital flows to emerging economies (Ghosh et al. 2014, Forbes and Warnock 2012, Rey 2016) and these have featured prominently in the policy debate and in the discussions of the G20 Eminent Persons Group.

Using a database of annual information on 32 countries from 1990 to 2014, we identify years of capital flow reversals in emerging market economies. Specifically, we follow the approach of Forbes and Warnock (2012) and Laeven and Valencia (2012) to define sudden stops and currency crises respectively.

Second, we construct our own measure of the global financial cycle by taking the principal component of a range of financial quantity and price indicators, following the approach of Eickmeier et al. (2013). We then run a number of logit regressions for sudden stops, currency crises, and other capital flow episodes on standard controls and our global financial cycle measure. If the marginal impact of the global financial cycle is significant in a country-year with an episode, we then label this episode as ‘global’. Our procedure identifies about half the sudden stops and currency crises as global, and we focus on these in the remainder of the analysis.

We look at potential access and use of IMF and reserves separately, as well as jointly. Moreover, we instrument global financial safety net use as it is potentially endogenous to growth (a larger contraction of output in a global crisis may push countries towards using the safety net more). We show an example of the pattern of GDP during and after a sudden stop with and without GFSN use in Figure 1 (based on ordinary least squares estimates). 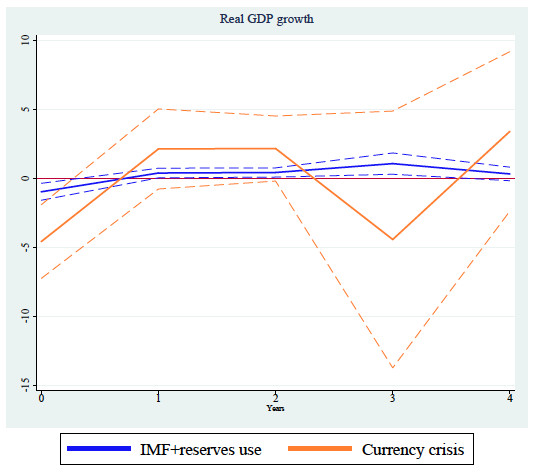 The following key results emerge from our analyses:

We find that while the global financial safety net can, in principle, help a country absorb globally driven shocks, the effectiveness of the elements depends on which type of crisis they are used for. First, the mere availability of global financial safety net access is not sufficient to cushion capital flow episodes and a country actually has to use the safety net. Second, the effectiveness is clearer for currency crises than for sudden stops, in particular for IMF support. In addition, the benefits come with a delay. Finally, IMF support appears to have a stronger cushioning effect than foreign exchange reserves, although this does not exclude the possibility that reserves could still be important in episodes that are driven by local or regional conditions. IMF support comes with strings attached and the IMF has ‘deep pockets’, at least from a perspective of a small economy.

Overall, our results indicate that policymakers should be less concerned about the global financial safety net being ‘patchy’ and, rather, encourage more targeted use of safety net resources. For example, this could be achieved through better coordination of the different layers that ensures the use of each layer when it is most efficient, for example, by sequencing them or by combining resources.

Authors’ note: The views expressed belong to the authors and are not necessarily shared by the institutions to which they are affiliated.