As Tom pointed out, his piece isn’t just about the news of the CO2 hitting new levels, but on what can be done to stop the march to ruin?

The Kochs and their carbon-lobby friends have essentially won.
–Wen Stephenson (source)
Our betters chose another path for us, and the rest, I’m afraid, will merely be consequences, the train wreck mentioned above, easily foreseen.
–Yours truly (source)

I wrote the sentence above in January 2018 as part of a backward look at 2017, the first of the years of consequences to follow the crossroads year 2016 — the year when Bernie Sanders was not elected president, was not even allowed to be a choice.

One of the train wrecks I foresaw is a consequence of our already-started revolt against the super-rich who rule us. The other is the coming climate catastrophe.

About the latter, the planet has recently passed a milestone back to which it may not return in our lifetime, or even in the lifetime of our species. For the first time since humans walked the earth — and perhaps since Australopithecus, our earliest post-chimpanzee ancestors, did as well — daily atmospheric CO2 crossed above 415 ppm to 415.26 as measured at the Mauna Loa observatory in Hawaii. (As you can see from the chart at the top, CO2 for the previous 800,000 years stayed within a tight range, between about 180 and 300 ppm. It’s now well above that range and rising fast.)

Not only that, but every daily reading at Mauna Loa from May 11 through May 18 was above 415 ppm: 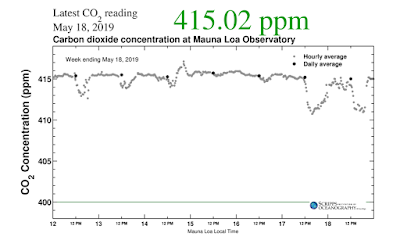 Hourly and daily averages for atmospheric CO2 at the Mauna Loa Observatory for the week ending May 18, 2019 (click to enlarge)

Small dots are hourly averages; large dots are daily averages. Note that the chart’s hourly peak, just before noon on May 15, crossed above 417 ppm.

May is usually the peak month for atmospheric CO2 — there’s a yearly rise and fall — but each yearly peak is inexorably higher than the last one. It appears that humans, as ruled by its fossil fuel–financed politicians, won’t stop burning carbon until they can’t — until they’re pre-Industrial at best, functionally extinct at worst. The train wreck.

Exxon Predicted This in 1982

Back when Exxon Corporation was studying climate change seriously, its scientists produced papers predicting atmospheric CO2 and global warming under a number of scenarios, including a “high case” scenario in which fossil fuel burning would increase and previously unavailable carbon resources, from shale for example, would become extractable.

Here’s a chart from one of those papers (pdf). It projects both projected atmospheric CO2 and global temperature increase from a 1980 baseline: 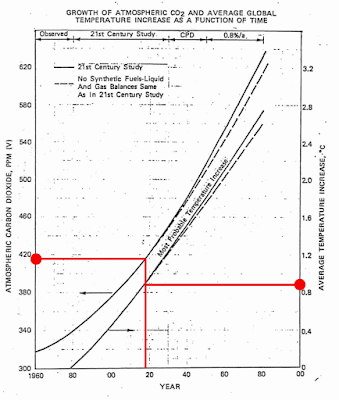 Chart from this Exxon paper. Annotation by Brian Kahn at Earther (source)

The Exxon prediction was startlingly accurate, at least so far. It put atmospheric CO2 (upper line) just below 420 ppm in 2019 and global warming (lower line) above 1.2°C after we add in the amount of global warming, 0.4°C, that occurred between the pre-Industrial low and 1980 [Hansen, 2018] — about where we are today, in other words.

Fossil fuel CEOs, including and especially those at Exxon, the global moneyed class in general, and their bought politicians — meaning almost all of them — are the reason we’re in this mess. They’re also the reason we may not get out of it, since I don’t see the revolt against death by fossil fuel, even at this late date, happening any time soon.

Which leaves us where we are today. Barring miracles, which do occur, we already know what’s coming. The Kochs and their carbon-lobby friends have essentially won. The train is approaching. All that’s left is to document the wreck.