Recent waves of immigration in the US and Europe have triggered debate around the economic and political impact. This column uses evidence from migration of Europeans to the US in the first half of the 20th century to show that large cultural differences can incite anti-immigrant sentiment despite their positive economic impact. Therefore, policymakers should give due attention to cultural assimilation and cohesion policies.

The recent immigration waves to Europe and the US have fuelled an intense political debate. Proposals to introduce or tighten immigration restrictions are becoming increasingly common, and support for populist right-wing parties has been on the rise in several Western democracies (Dustmann et al. 2019, Halla et al. 2017). Yet, in spite of the rising importance of immigration in the political arena, neither the causes nor the consequences of anti-immigration sentiments are fully understood.

First, despite the evidence on voting, the link between support for anti-immigration parties and the actual policies implemented in response to immigration has not been systematically investigated. Since we ultimately care about the actions and reforms undertaken by political actors, it is crucial to understand which policies, if any, are affected by immigration – and why. Will legislation regulating the immigration regime be introduced? Will redistribution and taxation be changed to prevent immigrants from having access to public goods?

Second, evidence on the causes of anti-immigration sentiments is mixed, and two main hypotheses have been proposed. The first explanation is economic in nature. It argues that political discontent emerges from the negative effect of immigration on natives’ employment and wages.1 While this idea is consistent with findings in Borjas (2003) and Dustmann et al. (2017) among others, it is in contrast with results in Card (2001, 2005), Foged and Peri (2016), and Ottaviano and Peri (2012), who document that immigrants have a negligible, or even positive, impact on natives’ earnings.

The second hypothesis is that natives’ backlash has cultural roots. Both today and in the past, a recurring theme in the rhetoric of anti-immigration politicians is that immigrants’ cultural diversity is an obstacle to social cohesion and a menace to the values of hosting communities (Abramitzky and Boustan 2017). Historical and anecdotal accounts present many examples of cultural opposition to immigration (Higham 1955), but there is scant systematic evidence on the extent to which culture directly triggers political backlash and policy change.

In a recent paper (Tabellini 2019), I study in a unified framework the political and economic effects of immigration across US cities between 1910 and 1930, a period when the massive inflow of European immigrants was abruptly interrupted by two major shocks: WWI and the Immigration Acts (1921 and 1924). Between 1850 and 1915, during the Age of Mass Migration, more than 30 million people moved from Europe to the US (Abramitzky and Boustan 2017), and the share of immigrants in the US population was even higher than it is today (Figure 1). Also at that time, anti-immigration sentiments were widespread, and the introduction of immigration restrictions was advocated on both economic and cultural grounds.

Figure 1 Immigrants as a percentage of US population 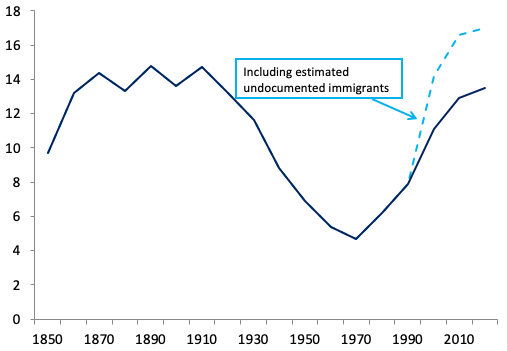 This setting offers three main advantages. First, by jointly analysing economic and political outcomes, I can test the relationship between economic insecurity and natives’ political reactions, and shed light on the causes of natives’ backlash. Second, since cities were independent fiscal units and because the US went through a major change in its (immigration) policy regime, I not only study the impact of immigration on voting, but I also measure its effects on actual policies – both at the local and at the national level. Finally, in contrast with more recent immigration episodes where migrants often come from culturally homogeneous groups, at the beginning of the 20th century there existed wide variation in immigrants’ cultural background (e.g. in terms of language or religion). Exploiting such variation, I can assess how the political effects of immigration varied with cultural distance between immigrants and natives.

To causally isolate the impact of immigration, I predict the number of European immigrants in each decade between 1910 and 1930 by relying on the national shocks to immigration triggered by WWI and the Immigration Acts. These events were exogenous to local political and economic conditions across US cities, but affected migration flows from different sending regions to different degrees.2 Since immigrants tend to cluster along ethnic lines (Card 2001), the differential effect of these shocks across European countries generated significant variation in the number as well as in the mix of immigrants received by US cities over time.

I begin my analysis by studying the political effects of immigration, which are summarized in Figure 2. Here, I plot the relationship between 1910-1920 immigration across US cities (x-axis) and the probability that a member of the House representing the cities in my sample voted in favour of the 1924 National Origins Act (y-axis) – the bill that eventually shut down European immigration to the US, and regulated the American immigration policy until 1965. There is a positive and statistically significant relationship between immigration and support for anti-immigrant legislation. These effects are also quantitatively large – a 5 percentage point increase in immigration is associated with a 10 percentage point higher probability of voting in favour of the National Origins Act. 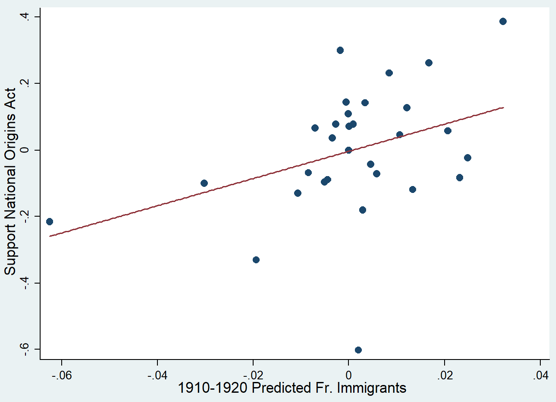 The political effects of immigration were felt also at the local level, as cities cut public goods provision and taxes in response to immigrant arrivals. The reduction in tax revenues was entirely driven by declining tax rates, while the fall in public spending was concentrated in categories where either inter-ethnic interactions are likely to be more salient (e.g. education), or poorer immigrants would get larger implicit transfers (e.g. sewerage, garbage collection). These ﬁndings suggest that immigrants were perceived as a ﬁscal burden, and that immigration reduced natives’ demand for redistribution.

After establishing that immigration triggered widespread, hostile political reactions, I investigate the potential causes for natives’ backlash. I start from the ﬁrst, and perhaps most obvious possibility – that immigrants might have increased labour market competition, lowering wages and raising unemployment among native workers. However, in contrast with this idea, I ﬁnd that immigration had a positive and large eﬀect on natives’ employment. My estimates suggest that a 5 percentage point increase in immigration raised natives’ employment by 1.4 percentage points or, by 1.6%, relative to its 1910 level. Immigration also increased ﬁrms’ investment, and induced natives to move away from occupations that were more exposed to immigrants’ competition and to specialise in better paying jobs which, because of discrimination and language barriers, immigrants did not have access to.3

Even though immigration had, on average, positive effects on natives’ employment and occupational standing, it is possible that economic losses were concentrated on some speciﬁc groups who were able to mobilise and demand political protection. Although I cannot entirely rule out this interpretation, I provide evidence against it. First, I document that even in occupations that were highly exposed to immigrants’ competition, natives were not more likely to be unemployed. Second, I show that in the sector most exposed to immigration (i.e. manufacturing), there was no signiﬁcant reduction in wages. Since manufacturing wages at the time were not reported separately for immigrant and native workers, and new immigrants were closer substitutes for previously arrived migrants than for natives, these ﬁndings can be interpreted as a lower bound for the negative eﬀect (if any) of immigration on natives’ earnings.

In the last part of the paper, I seek to reconcile the seemingly contrasting economic and the political effects of immigration. I show that natives’ political reactions were increasing in the cultural distance between immigrants and natives, suggesting that backlash had, at least in part, non-economic foundations. I proxy for cultural diversity using both religion and linguistic distance. The use of religion, in particular, is motivated by the historical evidence that, at that time, nativism often resulted in anti-Semitism and anti-Catholicism (Higham 1955). I find that, while immigrants from Protestant and non-Protestant countries had similar eﬀects on natives’ employment, they triggered very diﬀerent political reactions. Only Catholic and Jewish, but not Protestant, immigrants induced cities to limit redistribution, favoured the election of more conservative legislators, and increased support for the 1924 National Origins Act.

The findings in my paper may be specific to the conditions prevailing in US cities in the early 20th century, but they could be relevant for the design of policies aimed at dealing with the economic and political effects of immigration today. My results suggest that when cultural differences between immigrants and natives are large, opposition to immigration can arise even if immigrants are on average economically beneficial and do not create economic losers among natives. Thus, favouring the cultural assimilation of immigrants and reducing the (actual or perceived) distance between immigrants and natives may be at least as important as addressing the potential economic effects of immigration.