Yves here. I’m running this post because while the author has some good impulses about addressing climate change, many of particular ideas on the whole seem unproductive.

One big misconception is that bank lending is an “investment”. Even though a bank can retain a loan on its balance sheet as asset, loans are often sold, and in loan syndications, the lead lender often keeps only a small interest. Loan participations may be sold to private equity credit funds, other banks, large institutional investors like life insurers, or to “collateralized loan obligations” where various tranches are sold to investors.

Moreover, the subtext of the article is that bank loans are a major source of financing for fossil fuel exploration and development firms. It would take a lot of work to take a stab at the total sources of credit to the oil and gas industries, but in the US, which is a significant player, a good deal of it takes place outside the banking system. The majors go to the capital markets and sell bonds and commercial paper. The bigger shale gas players use junk bonds and the ones owned by private equity use “leveraged loans” where a great deal of each transaction is sold to private equity managed credit funds, where the end investors include public pension funds, insurers, sovereign wealth funds, and endowments…meaning institutional investors, not banks.

In addition, using protests to try to get businesses to change their practices doesn’t have a great record of success. The South African divestiture movement is a relatively isolated case. And with the TBTF banks having intensified their lobbying in the post-crisis era, they aren’t easily muscled.

Having said that, if you want to choke off credit to oil and gas exploration and development companies, one way would be to end the tax deductibility of interest on new lending, and phase out the tax deduction on any refinancings.

I am even less keen about the second idea in this article, that of using a public bank to finance green initiatives. This is a neoliberal scheme, not a progressive one. First, it is doubling down on the bad idea of using finance as a major vehicle for achieving public aims. Subsidizing public goals through lending supports the over-financialization of the economy and is an inefficient way to provide subsidies. Look at how using loans to make education and housing affordable has done the reverse.

Moreover, this “public” bank would effectively be in the “public-private partnership” business. Lenders come into a project after it has gotten far enough along to have its equity funding lined up. Lenders don’t influence the mission, approach, or staffing of a venture, they just say yes or no.

In addition, equity investors set artificially high return targets. That results in projects with very long term payoffs and/or significant periods of initial losses. So only equity-investor-attractive projects would ever be brought to a bank to consider, no matter whether the bank is a traditional bank or a public bank. Those are unlikely to be the sort of bold, higher risk or longer time frame initiatives that Green New Deal advocates see as necessary.

And that’s before you get to the fact that most states in the US once had public banks, and all save North Dakota’s were shuttered because they became cesspools of corruption. And in lending, North Dakota’s public bank makes a point of avoiding competing with private banks, instead typically acting as an additional lender to projects other banks bring to them. 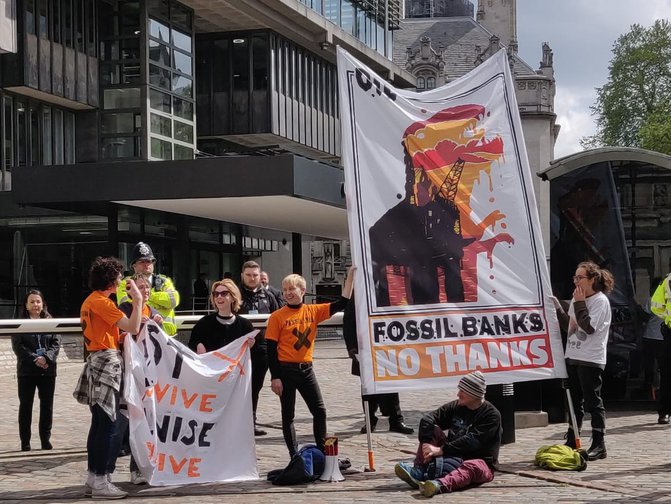 Protests are spreading as banks’ investments in fossil fuels contradict their Paris pledges on climate change.

On Thursday, May 2nd, I joined a group of students from Oxford on an early train to London. Dressed in our best corporate attire, we used shares proxied by a supportive NGO to enter the Barclays Annual General Meeting. When in his opening speech, Chief Executive Jes Staley brought up climate change, that was our cue. “Tell the truth!”, we shouted, standing as security swarmed around us. “Barclays banks climate chaos!”

In response to a growing wave of protest, Barclays management is trying to clean up its image. But according to a recent report by BankTrack, Barclays lends more money to fossil fuel companies than any other European bank, as “the top European banker of fracking and coal”.

Barclays also tops other European banks in funding for fossil fuel expansion, as in, the exploration and development of new fossil fuel reserves. But most existing reserves—an estimated 82 percent –must stay underground to avoid warming of over 2C. To meet the internationally recognised 1.5C target, we can afford to burn even less.

To be fair, the problem is not Barclays alone. The top 33 global banks collectively lent $1.9 trillion to fossil fuel companies between 2016 and 2018.

The Paris Agreement, which big banks including Barclays have pledged to support, calls for financial flows to be “consistent with a pathway toward low greenhouse gas emissions”. Responding to increased scrutiny, Barclays and others have started developing new fossil fuel policies, for instance, committing to stop lending to certain kinds of coal projects.

The BankTrack report, though, shows that no major bank has a policy compatible with a 1.5C or 2C warming target. Instead, big banks are supplying the money to send us on a hell road to 4C warming or more.

The dissimulation coming from Barclays top management indicates there will be no change of course.

At the recent AGM, the Chairman boldly claimed the bank had “moved away from the dirtiest fuels”. Yet despite reductions, Barclays along with other banks continues to finance coal and tar sands, despite the scientific consensus that most, if not all, tar sands must stay in the ground to avert runaway climate change.

Speaking after the Chairman, Chief Executive Staley offered his own bland reassurances. “We are already doing a considerable amount to support [the] transition to a low-carbon economy,” he declared.

But this “considerable amount” is not the necessary amount to avoid cataclysmic outcomes.

If we let the bankers have their way, if we continue on a pathway to 4C warming, we will pass on a planet ravaged by climatic shocks, swathes of it left uninhabitable. The effects on human society mean that we will also have lost our ability—economic and political—to do anything more about it.

Time for Something Radical

What we need instead is ambitious state intervention. And we need to focus that intervention on those responsible for producing fossil fuels.

Zeroing in on producers—rather than going with the conventional consumer focus—is likely to be more effective. It is also clearly more equitable, shifting the cost of a green transition onto the companies currently profiting from climate change.

Most producer-oriented policy ideas target fossil fuel companies rather than the banks that fund them. These policies include cutting subsidies, imposing new taxes, full or partial bans on new coal, oil and gas licensing, and even nationalisation.

Measures like these are necessary. But we cannot leave out the banks.

Instead, we should heed calls for a reformed banking system. This means reducing the role of private commercial banks and developing public banks with a mandate to prioritise social and environmental benefits.

Public banks in Germany and Costa Rica have already played an important role in funding green projects. Elsewhere, politicians are looking to replicate this success.

Meanwhile, the Labour Party in the UK has developed a comprehensive vision for a “new public banking ecosystem”. This will include a National Investment Bank to “[confront] the key social and environmental challenges of the 21st century, such as climate change.”

How Do We Make It Happen?

Having the right ideas is one thing. Building the power to make them a reality is another.

Currently, that power is concentrated on the wrong side; it lies with the banks, the fossil fuel companies, and the politicians they lobby.

But the political balance is changing.

The School Strikes, Extinction Rebellion protests, and talk of a Green New Deal are pushing climate change up the agenda in the UK. Our intervention at the Barclays AGM was a minor episode in this series. But perhaps my favourite moment was when the private security guards, paid by Barclays to remove rowdy activists, congratulated us on a job well done.

Even as public opinion shifts, though, our political class remains divided.

The Conservatives voted to pass Labour’s “climate emergency” motionthrough Parliament, but the Tory support looks nothing short of hypocritical given their recent actions (and inactions).

Only political actors on the left are demonstrating anything like the understanding, commitment or ambition needed to tackle climate change.

There is a long-standing reflex to seek “bipartisan”, “pragmatic” or “moderate” solutions. But just like Chief Executive Staley’s phrase, a “considerable amount”, these words are a polite cover for inadequacy and failure. We do not have the time to muddle through with half measures.

The way forward is to channel popular support for action on climate change into an organised movement. The power of that movement—marshalled to support a left government—is our best shot at doing something meaningful while we still can.