Lambert here: “Don’t look back. Something might be gaining on you.” –Satchel Paige

Business economists argue that the length of an expansion is a good indicator of when a recession will hit. Using both parametric and non-parametric measures, this column finds strong support for the theory from post-WWII data on the US economy. The findings suggest there is good reason to expect a US recession in the next two years.

This summer, the current US expansion, which started in June 2009, is likely to break the historical post-WWII record of 120 months long, which is currently held by the March 1991-March 2001 expansion. It is already longer than the post-WWII average of 58 months. Should we be worried? Is the next recession around the corner?

No, according to the conventional wisdom among more academic-oriented economists, who believe that “expansions, like Peter Pan, endure but never seem to grow old”, as Rudebusch (2016) recently argued. As he wrote, “based only on age, an 80-month-old expansion has effectively the same chance of ending as a 40-month-old expansion”. This view was also forcefully expressed last December by the (now ex-) Federal Reserve Board Chair Janet Yellen, who said “… I think it’s a myth that expansions die of old age. I do not think they die of old age. So the fact that this has been quite a long expansion doesn’t lead me to believe that … its days are numbered”.

My research with Paul Beaudry and Dana Galizia tends to favour the former view, that we should be worried about a recession hitting the US economy in the next 18 months.

There are two reasons why we reach this conclusion. The first relies on a statistical analysis that uses only the age of an expansion to predict the probability of a recession. The second digs deeper into the very functioning of market economies.

First, we estimate in Beaudry and Portier (2019) the probability of the US economy entering a recession in the following year (or following two years), conditional on the expansion having lasted q quarters. This can be done in a parametric way based on the Weibull distribution, or non-parametrically using Kaplan and Meier’s estimator of the survival function. Regardless of the method, and using post-WW2 US data, there is consistent evidence of age-dependence, as shown in Figure 1. For an expansion that has lasted only five quarters, the probability of entering a recession in the next year is around 10%, while this increases to 30-40% if the expansion has lasted over 35 quarters. Similarly, if looking at a two years window, we find the probability of entering a recession in the next two years raises from 25-30% to around 50-80% as the expansion extends from five quarters to 32 quarters (the exact probability depends on whether we use a parametric or a non-parametric approach).

Figure 1 Probability of an expansion ending in the next year, next year and a half, or next two years (parametric and non-parametric approach) 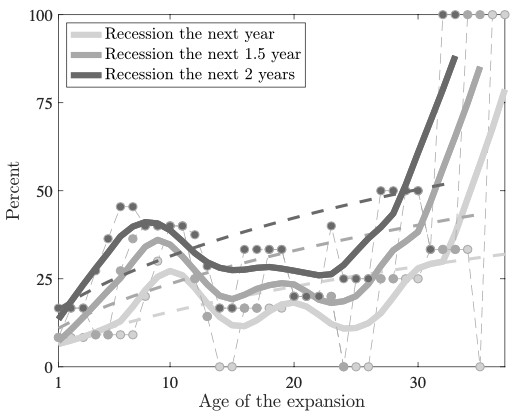 The non-parametric estimates suggest that duration dependence is minimal for expansions lasting up to 25 quarters. But after 25 quarters, the duration becomes very apparent. For example, when an expansion ages from six years to nine years, the non-parametric estimates suggest that the probability of a recession within a year almost triples. If one looks in more detail at the initial phase of an expansion – up to eight quarters – there is also some evidence of positive duration dependence, reflecting the possible occurrence of double-dip recessions. Then from eight to 25 quarters, there appears instead to be negative duration dependence as the expansion takes hold, that is, during this phase the probability of entering a recession appears to decrease as the expansion ages. Finally, after 25 quarters the probability of entering a recession increases rapidly as the expansion gets old. This suggests that, when they are older than six years, expansions may be favouring the growth of certain vulnerabilities that may make the onset of a recession more likely. In other work (Beaudry et al. 2016), we have shown that US real and financial series tend to follow a cycle of length about ten years. Of course, this does not mean that there are deterministic cycles of ten years, but such a statistical regularity makes a recession all the more probable when the expansion reaches ten years of age. Obviously, we recognise that all our calculations are based on a small sample of data since recessions are rather rare. Our results are the best inference possible given this limited data.

Second, our recent work (Beaudry et al. 2016, 2017) has shown that a market economy, by its very nature, may create recurrent boom and bust independently of outside disturbances. This idea is well captured by the statement that “a bust sows the seed of the next boom”. Although, such an idea has a long tradition in the economics literature (e.g. Kalecki 1937 or Hicks 1950), it is not present in most modern macro-models. According to this view, the economy builds up sources of vulnerabilities in expansions. Those vulnerabilities could be of a financial nature (for example the accumulation of debt/leverage or the concentration of risk or collateral among small sets of agents) or of a real nature (for example the excessive accumulation of durable goods or investment in housing). Because of such a build-up, one need not expect a bad shock to trigger a recession. Such a mechanism creates the type of duration dependence we have seen in the data, namely that as an expansion grows old, eventually the probability of a recession should increase.

To conclude, let us emphasise that the evidence and theory we are bringing forward do not imply a deterministic view of the business cycle. We shall not expect a recession to happen with probability one when the expansion reaches ten years of age. Analysts might find reasons to be concerned (Chinese slowdown, yield curve inversion, etc.). What we suggest is that, even in the absence of a sudden adverse shock, a recession is most likely to happen in the next one to two years, and that this risk is higher than what it was two years ago.