The latest jobs report showed a lackluster gain in jobs in May that was worse than economists had predicted.

While the sudden slowdown in jobs growth after many months of strong numbers is worrying and signals a weakening economy, a more long-term concern is the persistently low labor force participation rate that has not recovered in the decade since the onset of the Great Recession.

I’ve been studying labor market issues for over much of my 30 year career as an economist. Let me explain why you should be paying more attention to the participation rate.

But while the unemployment rate is currently near a 50-year low of 3.6%, that statistic doesn’t tell the full story and can mask a deterioration in the labor market.

The participation rate measures all active workers divided by the working-age population. More importantly, it reflects people’s attachment to the job market – including their economic engagement and also, because a job is such an important part of a person’s identity, their overall well-being.

When people who are unemployed grow too discouraged and stop looking for work, it causes the participation rate to go down. But as a result, the unemployment rate goes down as well because it doesn’t include people who have given up. This makes the picture look better than it is.

From about the late 1980s until 2008, the participation rate fluctuated around 66% to 67%. But after the Great Recession, the rate dropped more 3 percentage points over the next seven years and has barely budged since. The latest jobs report shows it’s at 62.8%.

The 3 percentage points decline in participation translates to over 6 million people no longer in the labor force. 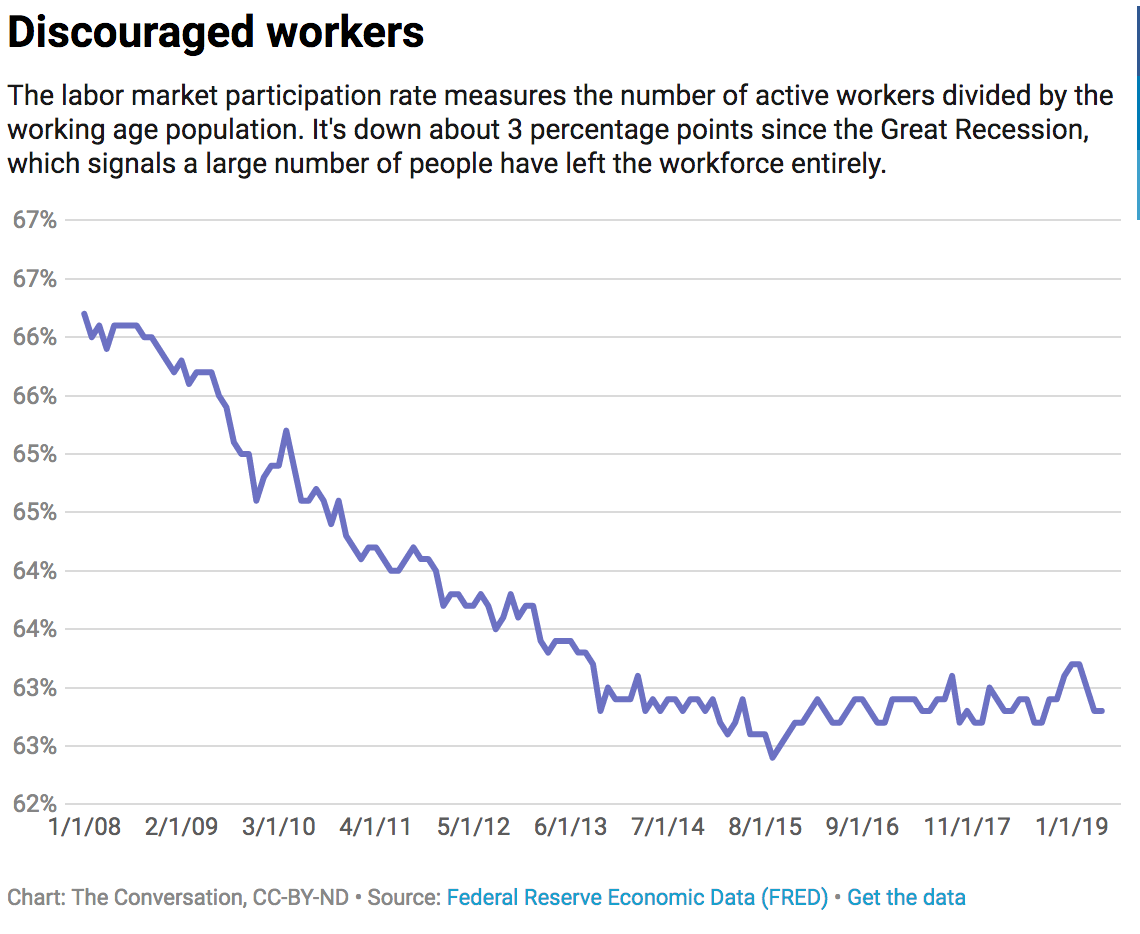 Trends in Men and Women

Men’s labor force participation has actually been fallingfor almost six decades. One possible reasonfor this is the decline in low-skilled jobs, a decline that was quite sharp during the worst periods of the Great Recession. Even with the improvement of labor market conditions since the depths of the recession, the participation rate has not recovered.

Women’s labor force participation has also been declining, although this is a somewhat more recent phenomenon. It had been rising since at least World War II from around 30% to a peak of around 60% in 1990, when the United States had the sixth-highest labor force participation rate of women among the 22 most advanced economies in that year. But around the time of the recession, it began to drop, and by 2010 the U.S. fell to 17th place.

Possible reasonsinclude the relative lack of parental leave and child-care policies compared with these other economies, as well as the greater opportunity for part-time work.

There are appropriate concerns about the cyclical headwinds facing the U.S. economy, and the May jobs report does little to offset those worries. But policymakers and all Americans should also be concerned about persistent longer-run trends, like the continuing low rate of labor force participation.