Sir Ivan Rogers June Speech, courtesy EU Referendum. I should say something about this, but the short version is Sir Ivan, who has pointedly avoided assigning crash out odds, now deems a no-deal to be “a probability.”

The Guatemalan Election as an Act of Organized Crime New York Times. Resilc: “This should stem the flow Norte.”

The Sunrise Movement Actually Changed the Democratic Conversation. So What Do You Do For a Sequel? Politico. UserFriendly:

Since I missed this convo the other day and this article mentions it;p ‘Woke’ dates back to the early aughts and is essentially the liberal version of ‘red pill’ it originally was along the lines of seeing systems of oppression for the first time, like you just woke up. Not exclusively ID pol oppression but definitely including it.

This article is smooth. I bet most of the people under 40 that read it won’t even realize the “let’s paint them all as dirty hippies” objective.

Youngstown’s black working-class voters are full of economic anxiety, and not for Trump. Slate (UserFriendly)

Biden takes shot at Bernie Sanders: Go start a ‘real, physical revolution if you are talking about it’ Washington Examiner (UserFriendly)

REUTERS IS NOW A UNIT OF US INFO-WAR COMMAND, REPORTERS AND INVESTORS REVOLT John Helmer

Why the Paper of Record Hates Cartoons Nation (furzy)

FOX U.S. Open Coverage Takes Time Out To Glorify How Fucked Up Carmel Is Deadspin

Day of Reckoning for KPMG-Failures in Ethics FCPA Compliance Report (Chuck L). Wowsers. The article is full of stuff like this:

In addition to taking these mandatory CPE hours, the professionals are required to pass a proficiency examination, administered by KPMG. KPMG also provides internal training to help its professional prepare for this examination. Professionals get three chances to pass. If they fail three times, they are reported internally, cannot sign off on audit assignment and may receive a dock in pay.

However it turns out that KMPG employees, from senior partners including lead audit engagement partners who were responsible for compliance with PCAOB standards in auditing their clients’ financial statements, down to junior level employees were sharing the examination answers freely between themselves. They shared this information via email and even sent screen shots of pages with correct answers.

And a bonus from Aleric:

10 little ducklings. Photo taken today by me at a office park drainage pond in Roseville, Minnesota. 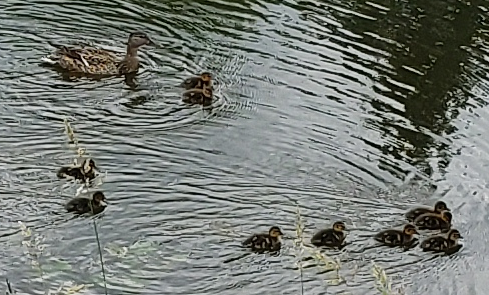