By Sharon Kelly, an attorney and freelance writer based in Philadelphia. She has reported for The New York Times, The Guardian, The Nation, National Wildlife, Earth Island Journal, and a variety of other publications. Originally published at DeSmogBlog.

A year ago, Chesapeake Energy, at one time the nation’s largest natural gas producer, announced it was selling off its Ohio Utica shale drilling rights in a $2 billion deal with a little-known private company based in Houston, Texas, Encino Acquisition Partners.

For Chesapeake, the deal offered a way to pay off some of its debts, incurred as its former CEO, “Shale King“Aubrey McClendon, led Chesapeake on a disastrous shale drilling spree. Shares of Chesapeake Energy, which in the early days of the fracking boom traded in the $20 to $30 a share range, are now valued at a little more than $1.50.

Encino has marketed itself as a stable source of long-term returns (something the industry overall has struggled so far to create), attracting the managers of one of the world’s largest pension funds to drill and frack the land that Chesapeake sold off to repay its enormous debts from fracking nationwide.

A Unique Model’ for Shale Drillers

Chesapeake, of course, is not alone in discovering that shale drilling can be financially disastrous for investors. In 2018, the top 29 shale producers spent $6.69 billion more than they earned from operations, an April report by Reuters concluded — a spending record racked up two years after investors began pushing shale drillers to start turning a profit. In December 2017, the Wall Street Journal found that shale producers had spent $280 billion more than the oil and gas they sold was worth between 2007 and 2017, the first 10 years of the shale drilling rush.

“We lost the growth investors,” Pioneer Natural Resources CEO Scott Sheffield recently told the Journal. “Now we’ve got to attract a whole other set of investors.”

Ray Walker, Encino Energy, starts the #DUGEast Conference off in a fireside chat with host Richard Mason. Walker says the Utica will really surprise people going forward. Encino has 900,000 acres in Ohio. “We have a lot of running room.” pic.twitter.com/SA0l3PgnCS

“We’re not your typical private equity company in that the Canada pension plan is I think the third largest pension plan in the world,” Ray Walker, Encino’s chief operating officer, told attendees at last month’s DUG East shale industry conference in Pittsburgh. “They have a long-term view on capital and they don’t expect their funds to start declining — in other words more people [in Canada] are putting in today than will be taking out, and they don’t expect that to flip til 2050-plus.”

“So, it’s a unique model and it’s something I had not ever run across in the industry,” Walker, who served as chief operating officer for the gas drilling company Range Resources until early 2018, added. “It’s what really attracted me to come out of retirement, to do something different and a little bit more exciting and a long-term — really long-term view.”

“Yeah,” Walker replied with a laugh.

Long-Term Investments as the Climate Changes

The Canada Pension Plan — often compared to the U.S.Social Security system — is funded by mandatory contributions from workers’ wages that generally begin at age 18 and end at age 65. The CPPIBinvests that money on behalf of the plan.

Last May, Mark Machin, the chief executive officer of the CPPIB, pledged to start taking the risks associated with climate change more seriously.

“We’re going to make a huge push on it this year,” he told the Calgary Herald. “We want to do a much better job of being able to understand the risks that we’re taking on in each investment and the risks we have embedded in the portfolio, and make sure we’re being paid for them.”

As the impacts of climate change are increasingly felt around the globe, watchdog groups have pushed pension fund managers to keep in mind the ways that climate change will impact the global economy in the coming years and decades.

“Pension funds have legal obligations related to their fiduciary duties, to consider long and medium-term risks, such as those related to climate change that could have adverse effects on their investments,” the Global Initiative for Economic, Social, and Cultural Rights wrote in an April 17 report. “Such risks include physical impacts of climate change on pension fund assets and investments, but also the increasingly evident risk of stranded assets and the associated legal risks of failing to address the climate-related risks.”

Other large pension funds have concluded that the oil and gas industry carries too much economic risk to make for a sound long-term investment — even without taking climate change into account. This March, Norway’s $1 trillion Government Pension Fund Global announced that it would be divesting from oil and gas exploration firms, a move affecting $7.125 billion worth of its holdings.

“The objective is to reduce the vulnerability of our common wealth to a permanent oil price decline,”Norway’s finance minister, Siv Jensen, told The Guardian as the move was announced.

Most of the money in Norway’s sovereign wealth fund comes from the profits it derives from oil and gas production. The decision to drop certain oil & gas investments isn’t based on climate change but fear of price volatility in oil and gas stocks. https://t.co/WDqG0Yy43r

Outside observers have specifically warned that pension plans that invest in shale companies might wind up with regrets.

While the shale drilling industry’s financial instability may not be so large as to pose an overall risk to the financial system, “I think there’s risk to pension plans that are pouring their money into private equity firms, which in turn are pouring billions into shale companies,” Bethany McLean, author of the book Saudi America: The Truth about Fracking and How It’s Changing the World, told E&E News in a September 2018 interview. McLean is also widely credited as the first financial reporter to take a critical look at energy company Enron before its collapse.

Many shale drillers told investors that they plan to drill multiple wells — in some cases 20 or more wells — from the same well-pad. But the industry has discovered that those later wells, called “child” wells, often perform worse than the first well drilled, called a “parent” well.

“It’s something we’re all trying to synthesize,” Encino’s Walker said in Pittsburgh as he discussed parent-child well interference. “There’s still a whole lot of learning curve to go through. But I think the one thing that everybody is noticing, probably even more so in West Texas than up here, is that parent-child relationship is playing a huge role in the recoverable reserves. In other words, the second, third, fourth well are not anywhere near as good as the first well.”

A Gamble on Shale

The stock markets and banks have become increasing unfriendly places for shale drilling companies as the oil and gas industry has under-performed compared to other parts of the economy. This has left drilling companies hunting for capital to fund continued drilling — and they are increasingly turning to so-called private equity — a category covering both private investors like Warren Buffett and asset managers like pension funds.

Drilling companies plan to source 40 percent of their capital for 2019 from private equity funds, according to a recent survey by Haynes and Boone, compared to 26 percent from selling the oil and gas they produce, 21 percent borrowed from banks, and 12 percent in debt and equity from capital markets like Wall Street.

Privately held companies like Encino are more opaque than publicly traded oil and gas companies because they generally are not required to make their financial information public. That means there’s little publicly available information about how private shale drilling companies have performed over the past decade. And every shale drilling company has unique financial prospects, based on a broad array of factors that include the amount it spent to acquire drilling rights, its drilling and fracking costs, and the amount of oil, gas, and natural gas liquids it can tap.

Encino did not respond to questions sent by DeSmog. “Our assets generate strong cash flow, we have modest debt, and we support our development activities with a robust commodity hedging program,” the company says on its website. 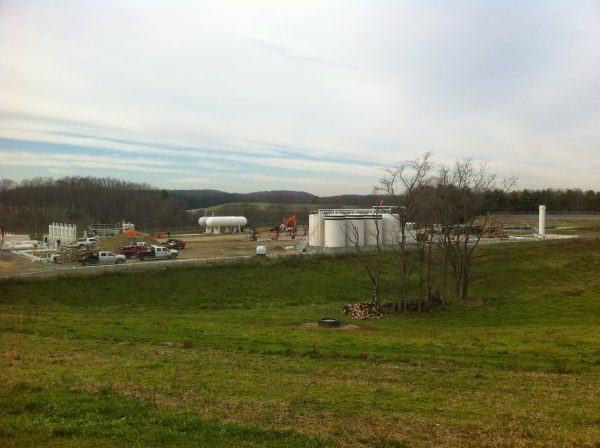 Canada’s pension fund praised Encino’s acquisition of Chesapeake Energy’s acreage in Ohio when that deal was announced. “We are pleased to support EAP’s [Encino Acquisition Partners’] acquisition of these highly attractive Utica shale assets, which provides CPPIB with meaningful exposure to a leading North American natural gas play and aligns with the growing focus on energy transition,” said Avik Dey, managing director and head of energy and resources at the CPPIB.

Others saw the deal as carrying a significant degree of risk. Moody’s Investor Services rated debt associated with Encino’s Utica deal at B2. “A B2 rating is deep into junk status and means there’s a very significant chance you’ll end up in default,” Axios explains. Moody’s rated the overall probability of default one notch higher at B1.

For its part, Encino predicts that it can do better in the Utica than Chesapeake Energy could — not just in terms of individual well performance, but also in avoiding the boom-bust cycle for which the oil and gas industry is notorious.

“All of that is part of a longer-term strategy to run this as a normal business that needs to be profitable, less volatile, and therefore better for its shareholders, its employees, and the community,” Encino CEO Hardy Murchison told an Ohio newspaper after a talk at Kent State University in March.

“Pretty excited about what we’re seeing, the economics are very favorable,” Walker said at the industry conference. “So, Chesapeake did a great job of setting this up, but we’ve got a lot of running room going forward.”