Lambert here: “… which, taken at the flood, leads on to fortune.”

There is global cycle in capital flows that is intimately connected to global risk. This column argues that, contrary to common wisdom, US monetary policy is not the only factor, or even the main factor, behind global risk and this global cycle. Financial shocks matter more than US monetary policy. Domestic policies may still mitigate the cycle of global capital flows at the country level.

A global financial cycle would significantly reduce the ability of policymakers to steer domestic financial conditions away from global trends, for instance by adopting flexible exchange rate regimes and running a monetary policy independent from that of the US, which sets global monetary conditions. The global financial cycle would reduce the trilemma to a dilemma – policy choice would be solely between an independent monetary policy and capital account openness. The exchange rate regime would become irrelevant (Rey 2015, 2016).

Others maintain that a flexible exchange rate regime still allows for a higher degree of monetary autonomy (Klein and Shambaugh 2015), and so they challenge the concept of a dilemma. Our recent research (Habib and Vendetti 2019) offers three important insights:

The global financial cycle is strongly influenced by US monetary policy and related to both financial market volatility and to the degree of risk aversion of global investors (Miranda-Agrippino and Rey 2015). Our Global Stock Market Factor – a data-parsimonious version of the global factor of Miranda-Agrippino and Rey (2015) that summarises the co-movement of stock market returns in 63 economies – is tightly connected to a cycle in global capital flows, as measured by the sum of gross capital inflows across 50 advanced and emerging economies (Figure 1). The correlation between the two series is remarkably tight (75%). To our knowledge, it is extremely difficult to find empirical studies that find such a close link between measures derived from prices (as our Global Stock Market Factor) and those derived from cross-border capital flows. 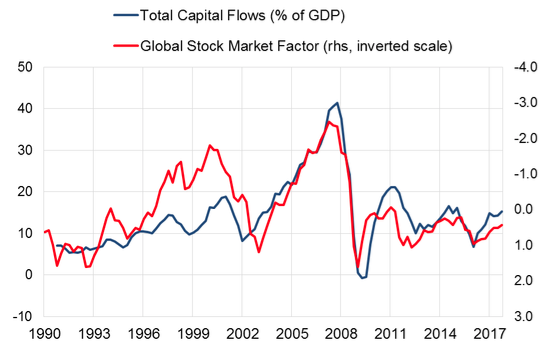 The Drivers of Global Risk: Not Only US Monetary Policy

The second important pillar of the theory of the global financial cycle is the role of the US, the centre country in the international monetary system, in influencing global risk and shaping financial conditions globally (Bruno and Shin 2015). In our analysis, we did not find that the US monetary policy has a robust and significant direct impact on capital flows. We did find that that US monetary policy may have an effect on capital flows indirectly, influencing global risk.

In particular, we investigated the structural drivers of our Global Stock Market Factor and identified four shocks that should be expected to impact global risk:

As shown in Figure 2, financial shocks, which can be interpreted as exogenous changes in the risk-bearing capacity of the financial sector, matter slightly more than US monetary policy shocks in driving global risk. Other shocks, such as those driven by geopolitical or economic policy uncertainty or by the US demand are not particularly relevant. Notably, global risk still includes a significant idiosyncratic component that is not explained by our shocks. 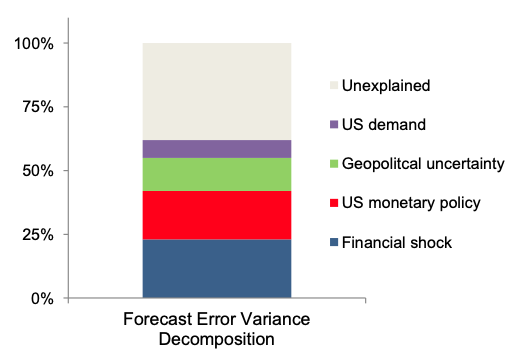 The Transmission of Global Risk to Capital Flows

Finally, we studied how capital account openness and the exchange rate regime influence the transmission of global risk to different types of capital flows. Remarkably, we found confirmation of a trilemma in the transmission to capital flows, as countries that are more financially open, and that adopt a strict peg, are more sensitive to global risk. This trilemma is largely driven by one category of cross-border flows – ‘other investment’. This is largely made up of bank loans, confirming the importance of global banks in the narrative of the global financial cycle. In particular, for emerging markets with open capital accounts and an exchange rate target, global risk shocks may impart a significant shift in capital flows compared to normal times. To get a glimpse of the economic impact, a sharp rise in global risk – for example, a two standard deviation shock to our risk measure – would translate into a decline in gross capital inflows of 1% of GDP in a quarter for emerging markets, but a decline of more than 4% of GDP for those emerging economies without capital controls that adopt a fixed exchange rate regime.

Reconciling the Global Capital Flows Cycle with the Trilemma

Is there a contradiction between the tight link between our Global Stock Market Factor and global capital inflows, lending support to the presence of a policy dilemma (Rey 2015), and the evidence of a classical trilemma? Not necessarily, as the policy regimes may change through time, reinforcing or weakening the link between global risk and capital flows. Figure 3 shows the average level of de jure capital account liberalisation and the share of countries adopting a strict peg in our sample in the 1990s, the 2000s, and since 2010. 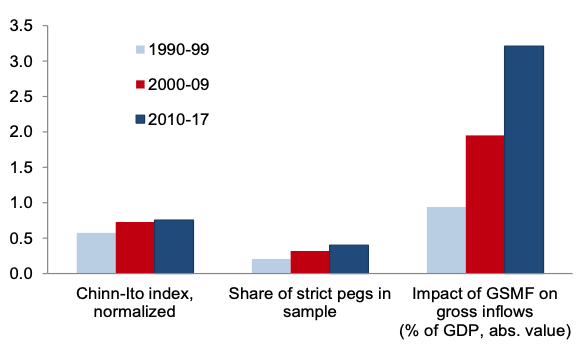 Notes: the normalised Chinn-Ito (2006) index is a measure of de jure capital account openness ranging between 0 (completely closed) and 1 (fully open). Strict pegs are defined according to the de facto exchange rate arrangement classification by Obstfeld et al. (2010). The last three columns report the absolute value of the coefficient associated with the Global Stock Market Factor (GSMF) in the benchmark panel fixed-effects model for total capital inflows, estimated across the three sub-samples.

Both measures tend to increase over time. The higher these two measures, the stronger the expected sensitivity of capital flows to global risk according to the trilemma. Indeed, this is exactly what we find once we re-estimate the impact of global risk on capital flows in our empirical model across these three decades.

There are interesting implications for the future analysis of international macroeconomic models and the international transmission of monetary and financial shocks.

Second, domestic monetary and exchange rate policies may still influence the transmission of global risk to capital flows, especially cross-border bank loans. On the contrary, portfolio flows appear to be less sensitive to global risk and completely insensitive to the prevailing exchange rate regime, because the adjustment to risk shocks, most likely, takes places through prices and not quantities.

Our results call for a careful assessment of the financial stability implications of global risk shocks. As the composition of global liquidity shifts away from bank loans to other sources of financing, such as equity and bonds, sudden shifts in investors’ risk attitude could propagate faster than in the past, through sharp fluctuations in market prices rather than capital flows.

Authors’ note: The views expressed in this column belong to the authors and do not necessarily represent the views of the ECB.