Yves here. Anyone who romanticizes being self employed or gig work makes clear they either don’t know much about it or are trying to exploit people who wind up there.

Is the rise of ‘atypical’ work arrangements – such as self-employment, freelancing, gig work and zero-hour contracts – a result of workers wanting such jobs or because they have no other choice? This column reports evidence from the UK and the US that while atypical workers may like flexibility, they would prefer a steady job. Indeed, workers would agree to earn less in order to increase their employment security.

There has been an increase in the number of workers engaged in atypical work arrangements across the UK and the US. In the UK, the proportion of workers who are solo self-employed (encompassing freelancers, contractors, gig workers and one-person business owners) has doubled since the 1980s, as shown in Figure 1. The number of workers on zero-hour contracts has increased from 200,000 to almost a million since the turn of the millennium.

Evidence from Katz and Krueger (2019) shows that the US has experienced similar, albeit more modest, trends with the proportion of workers engaged in atypical work arrangements increasing by approximately 10-20% over the period 2005-2015.

Figure 1 Self-employment in the UK 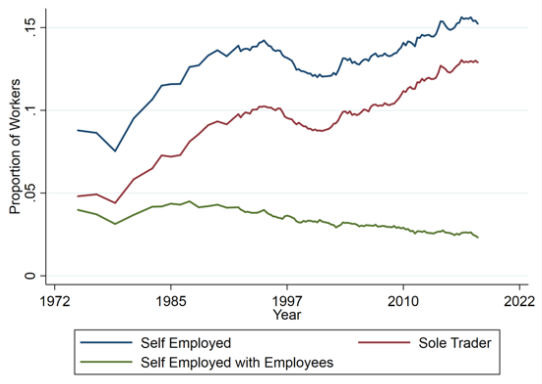 What Does This Mean for Workers?

The implications of the changing nature of work have been hotly debated, especially at a policy level. In the UK, it has given rise to the government’s independent review of modern working practices – the Taylor Review (Taylor et al. 2017). Evidence from the UK’s national statistics suggests that the self-employed have lower weekly income than regular employees, and workers on zero-hours contracts experience lower hourly wages that dropped more than normal employee’s wages during the great recession (see Figure 2).

For the US, Katz and Krueger (2016) find that even after taking account of personal characteristics and occupations, workers in atypical work arrangements had lower weekly earnings. Atypical work arrangements are also not usually afforded certain non-pecuniary benefits such as job security, and holiday and sick pay (which is mandatory for all employees in the UK).

At the same time, such work arrangements are likely to offer other benefits, such as work and location flexibility, autonomy, and the opportunity to offset expenses in one’s income tax bill. This suggests two possible mechanisms may be responsible, and each having different implications for worker’s welfare: 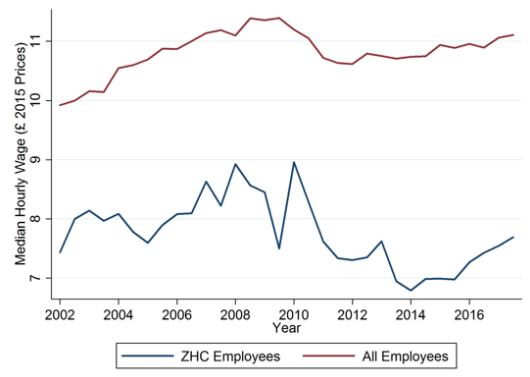 Two recent studies have looked at demand-side effects. Katz and Krueger (2017) find that in the US, workers who experience unemployment spells are more likely to be involved in a form of atypical work, while in Datta et al. (2019), my co-authors and I highlight the causal role of labour market regulation in the use of atypical contracts. The latter in particular exploits the introduction of the UK National Living Wage (which represented a 7.5% increase in the wage floor), and we find that both care homes and domiciliary care agencies responded by increasing use of zero-hours contracts.

A few studies have looked to estimate worker preferences over job characteristics and fringe benefits. Mas and Pallais (2017), for example, estimate how much job applicants would be willing to give up in terms of pay for a more flexible job. They find that hours flexibility is not largely valued by the majority of workers, though there is a small proportion who are willing to pay highly for flexibility. They do, however, find a strong aversion to jobs where employers have scheduling discretion.

In a recent study (Datta 2019), I go further and attempt to elicit the full distribution of valuations for a complete set of job characteristics, which are arguably the most important distinguishing factors for traditional and atypical work arrangements. These include job security, in-work benefits of holiday and sick pay, hours and location flexibility, workplace autonomy, and taxation implications. I do this for both UK and US respondents, thus allowing a cross-country comparison while taking a careful account of institutional differences.

Eliciting labour supply preferences is challenging. Realised choice data has a number of shortcomings including incomplete information on job descriptions and the available alternatives.

To overcome this, I exploit the trade-off between typical and atypical job attributes in an experimental research design where respondents in a representative survey are offered fictitious job choices, and where jobs are described by a wage and the aforementioned attributes.

Furthermore, respondents were explicitly informed that the jobs were identical except for those characteristics highlighted in the description. This part of the question was key to ensure analysis is causal. In total, approximately 4,000 people were surveyed – 2,000 in the UK and 2,000 in the US.

What a Worker Wants

There are important institutional differences between the UK and the US when it comes to permanent contracts. In the US, only around 34% of employment relationship are afforded some type of ‘just cause’ protection in their contracts, whereas in the UK, permanent contracts by law offer benefits including mandatory notice periods, redundancy pay rights and unfair dismissal protection. Despite this fact, the valuations of a permanent contract are very similar between the two countries (55.4% of an hourly wage in the UK versus 44.1% in the US).

After contract length, holiday pay and sick pay (described as 28 days paid annual leave and 16 weeks paid occupational sick leave) are the most valued job characteristics, with UK-based workers willing to give up approximately 35% of their hourly wage for holiday and sick pay.

In the US, the figure is marginally lower at 27%. This is surprising given that employees there currently face no federal legislation on either, 23% receive no voluntary paid leave, and the average US employee only receives 14 paid days holiday per year. These results suggest that the majority of US workers may have a strong taste for UK-style labour market policies.

Workers do value characteristics associated with atypical work arrangements, although on average far less than security. I find that workers are willing to give up on average 24% of their hourly wage for location flexibility, 14% for hour flexibility and 11% for workplace autonomy (the ability to choose the tasks they perform).

Heterogeneity analysis reveals that, at the mean, respondents in atypical work have a comparatively greater valuation for atypical job attributes, suggesting that individuals sort into types of work based on their preferences. Despite this fact, atypical workers still value job security more than any other attribute. Distributional analysis suggests that in the UK, over 50% of self-employed individuals would prefer to be in a traditional, permanent 9am-5pm work arrangement.

My results suggest that the majority of workers prefer characteristics associated with traditional employee–employer relationships, and this even holds for the sub-sample of those in atypical work arrangements. Rather than suggesting that labour supply preferences have contributed to the rise in atypical worker arrangements, I find that the changing nature of work is likely to have significant negative welfare implications for many workers.

In the UK, these results give credence to certain policy recommendations outlined in the Taylor Review (Taylor et al. 2017). In particular, those aimed at securing workers in precarious employment relationships rights closer to employees. It is vital, however, that further analysis be performed on the demand side to confirm how firms may respond to such policies.