Yesterday, in Wall Street Journal Publisher Tells Supreme Court of Being Victimized by California, the Hollywood Reporter described in detail, based on an amicus brief filed with the US Supreme Court, how Dow Jones had tried to obtain damages for systematic copyright abuses we identified, and got way less than they thought they were entitled to due to California claiming that CalPERS had sovereign immunity.1

On Tuesday, Rupert Murdoch’s Dow Jones & Company shared a tale of woe with the Supreme Court….

“Dow Jones was a principal victim of what must stand as the most egregious exemplar of copyright infringement by a state,” the company’s lawyers wrote in an amicus brief in Frederick L. Allen, et al. v. Roy A. Cooper, III, Governor of North Carolina, et al.

In June 2017, a blogger published a story how CalPERS, the California state agency that administers the nation’s largest pension fund, was reproducing articles in full from The Wall Street Journal and other publications. The articles were disseminated in a daily news alert and maintained on an internal site apparently accessible to the public. According to Dow Jones, which says it never authorized this, there were approximately 9,000 WSJ articles on the site stretching over nearly a decade’s worth of time…

As for Dow Jones, the publisher obtained a $3.4 million settlement, but the amicus brief reveals more details about what happened and its dissatisfaction with the result. The company’s lawyers say the scope of the infringement would ordinarily have resulted in penalty “exceeding eight figures,” but CalPERS “asserted that sovereign immunity wholly exempted it from any liability to Dow Jones for the infringement in which it engaged.”

“Dow Jones was left with a severely emasculated claim against CalPERS, ultimately securing a low-seven-figure settlement,” continues the amicus brief (read here), adding elsewhere, “The economic value of the Dow Jones copyrighted content misappropriated by the State of California is enormous.”

We have embedded the amicus brief at the end of this post.

We continue to be The Blog That Must Not Be Named, much to our frustration. It is also frustrating that Hollywood Reporter didn’t link to the second, more substantive post on CalPERS’ copyright infringement. In it, we showed that we had copied the contents of the in-house site and determined the number of infringing stories per publication:

From the inception of the site on August 2, 2009 through June 9, 2017, CalPERS has published the full text of over 50,000 articles. These articles were on an internet address open to any member of the public. All the articles were in a standardized format. None had any indicators that the CalPERS had paid the license fees to allow it to present them to its roughly 2,700 employees and board members, such as notices of copyright that publishers typically require for authorized republication.

Here are the publications from which CalPERS heisted the most articles: 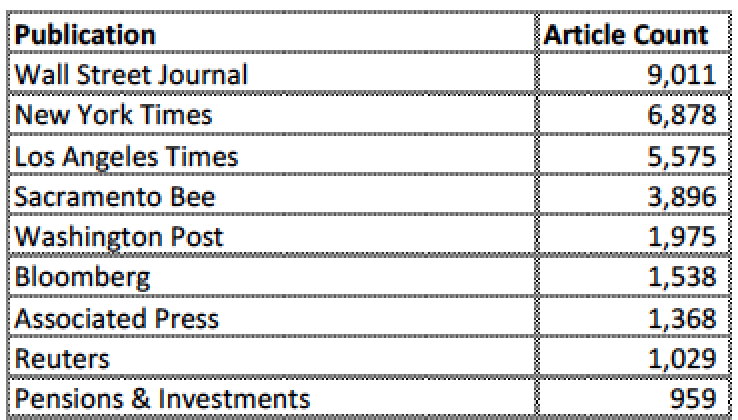 Nevertheless, it was useful to see Dow Jones confirm our contention in this post that it was entitled to ginormous damages, frankly even larger than we had estimated. From the same post:

Many readers might assume that damages would tend to be the statutory minimum, which based on our tally would put the total damages for infringement of Wall Street Journal articles at $6.8 million and for the Times, $5.2 million.3 But even if either publication were to use this basis for arguing damages, the actual exposure is much greater. As Boston-based intellectual property lawyer Dan explained:

The assignment of damages is intended to have a punitive effect. If the plaintiff goes for statutory damages, they are $750 to $150,000 per infringement based on willfulness. Courts have tended to award higher damages because otherwise users could look at the cost of getting a license versus paying minimum damages, and say, “I’ll take a chance. If I get caught infringing, I know my maximum downside and it’s worth playing the odds.”

The intention of the legislation is also to encourage copyright registration, which is another factor in courts in looking favorably upon plaintiffs who have registered their copyrights. Finally, in cases that are pretty cut and dried, judges are not keen about parties showing up in court because the defendant appears unwilling to pay a reasonable settlement and tend to weigh that in their thinking process…

As you’ll see in the amicus brief, Dow Jones argues it suffered huge financial damages. Factoring in punitive damages, which were clearly warranted in a case of long-standing and willful abuse, it had reason to otherwise to expect to get a huge settlement:

The economic value of the Dow Jones copyrighted content misappropriated by the State of California is enormous…..At the time Dow Jones learned of the ongoing CalPERS infringements, the Dow Jones reprint price schedule stipulated a fee of $360 for the right to reproduce a single full-text Journal article in a one-time email to 200 recipients and a fee of $1,900 to display a single full-text Journal article on a publicly accessible website for one year. Considering that CalPERS had displayed over 9,000 such articles, most of them for multiple years, and originated a daily email containing a compilation of such full-text articles for years, the value of what it took easily measured well into eight figures. Moreover, Dow Jones had registered its copyrights in the great bulk of the infringed works within three months of publication, and therefore would be entitled to elect statutory damages, which are at least $750 for infringement of each work, and may be as high as $150,000 per work for willful infringement or $30,000 without a finding of willfulness. See 17 U.S.C. §§ 412, 504(c). Under that regime, federal courts regularly assess damages at anywhere from two to five times the commercial rates at which the works are licensed as a disincentive to infringement,3 which ultimately affects the value of settlements that copyright holders are able to reach with infringers in negotiations seeking to avoid litigation. Indeed, Dow Jones announced a recent settlement in which private companies settled claims that they infringed Dow Jones’s copyrights in its articles for $7,000 per work infringed.4 Even factoring in issues such as potential application of the statute of limitations5 and the possibility of volume discounts affecting the benchmark licensing rates, the scope of the infringement in which CalPERS engaged would ordinarily have resulted in a copyright-infringement liability to Dow Jones easily in or exceeding eight figures, and much more in the aggregate to the thousands of other news publishers it victimized.

It is too bad not just for Dow Jones but for CalPERS beneficiaries and California taxpayers that things broke this way. If CalPERS had settled with Dow Jones for, say, $70 million rather than $3.4 million, it would have gotten tons of deservedly unfavorable press coverage and might have embarrassed even this normally staff-toadying board to be less trusting, rather than treat board meetings as an empty ceremony. Instead, the staff is in the midst of a brazen power grab and the board seems all too happy to go along. Apparently no one gave them the memo that they are responsible no matter how much they try to shirk their duties.

1 The amicus brief argues only that the California Government Code allows for state bodies to be sued, but appears to have missed that California further effectively waives sovereign immunity in quite a few areas by specifically enumerating where it retains immunity, in Government Code § 905. Intellectual property and copyright claims are not excluded. Dow Jones’ attorney act as if they missed this by citing Arya v. CalPERS as proving that CalPERS was immune. But Arya v. CalPERS was over alleged retaliation and discrimination claims, and those are indeed specified as areas where the state retains sovereign immunity (see § 905(c) and § 905 (f)).

None of the cases that Dow Jones cited tested an intellectual property claim against a government body in California. It’s not likely that there were other instances where intellectual property misappropriation by a California state body rose to the level that would justify the cost of suing the state, and where the victim had deep enough pockets to be a credible plaintiff.

Given that the California Government Code quite deliberately and specifically waives immunity for intellectual property claims, couldn’t Dow Jones have tried its luck arguing that the statute contemplated the adjudication of intellectual property claims, which could only occur in Federal court? Given how much was at stake for Dow Jones, and that this issue would be settled right out of the box, meaning it would not be massively costly to try what appears to be a novel argument, it seems peculiar that Dow Jones didn’t have a go at it. Or were its outside attorneys afraid that if they looked like they were advocating against taking a very scrawny bird in the hand, that they would be blamed if taking a flier didn’t pan out?