Yves here. In the meantime, the WHO says not to worry about plastic in the form of microplastics, while admitting they don’t know much about the health impact. From European Scientist:

So far, there is no proof that microplastics in drinking water pose a risk to human health, according to a new safety review into the potential risks of plastic in drinking water released on 22 August by the World Health Organization (WHO).

The recent report was motivated by a worrying analysis published last year, which found some form of microplastic contamination in 93 per cent of bottled water purchased in 19 locations in nine different countries – a total of 259 bottles (1). In response, the WHO launched the recent safety review into the potential risks of plastic in drinking water. 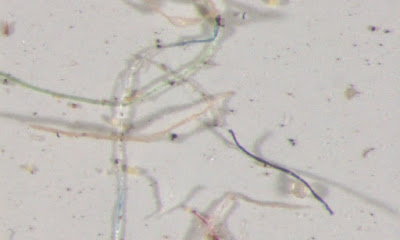 Rainwater samples collected across Colorado and analyzed under a microscope contained a rainbow of plastic fibers. Photograph: USGS (source)

I often worry whether we aren’t one of those species that self-eliminates, that commits “ecological suicide” as many bacteria do when they turn their environment too acid to live in. It’s certain we’re polluting the air with CO2 in a way that will change the climate from habitable to very inhospitable.

But we’re doing this in other ways as well — according to the latest news, surprisingly, with plastic. To be more exact, the microplastic that results from the breakdown of our trash, which as you likely know if you look at your garbage, is filled with plastic.

Microplastics are fibers that can be seen only with a microscope. The latest reports show that microplastic is not only present in abundance in the ocean, where much of our bulk plastic resides, but also in the air and, via the same settling effect that drops soot and dust to the surface of the earth, on the ground we walk across.

Day after day, year after year, minute after minute, a film of microplastic particles is raining on the earth. The more we produce it, the more we will live in it. If in a thousand years we revert as a species to Stone Age life, reduced in numbers and struggling to survive, we’ll find the ground, not rich in minerals as it was when our ancestors first walked on it, but rich in the indestructible garbage our descendants’ ancestors — us — cast off on the way to their own self-caused demise.

One report from April of this year in Science reveals the amount of plastic descending on the Pyrenees in France:

Prior studies have shown that microplastics, which can be ingested and inhaled by humans—and which may lead to reproductive issues in some marine mollusks—can rise up into the atmosphere and drop back to solid ground in the cities they come from. But scientists thought these plastics couldn’t travel very far from their urban sources.

To find out just how far they can go, the researchers collected particles falling from the sky in dust, rain, and snow for 5 months at the Bernadouze meteorological station in the Pyrenees mountains in southwestern France—100 kilometers from the nearest city.

To their horror, the authors found plastics, predominantly the kind from the single-use packaging used in shipping. From their sample, they determined that each day, an average of 365 plastic particles sifted down from above into the square meter surface of the collection device. If comparable quantities of airborne microplastic fall across the rest of the country, the researchers estimate roughly 2000 tons of plastic blanket France each year, they report today in Nature Geoscience.

Another report in the Guardian says this about plastic falling on the Rockies:

Plastic was the furthest thing from Gregory Wetherbee’s mind when he began analyzing rainwater samples collected from the Rocky Mountains. “I guess I expected to see mostly soil and mineral particles,” said the US Geological Survey researcher. Instead, he found multicolored microscopic plastic fibers.

The discovery, published in a recent study (pdf) titled “It is raining plastic”, raises new questions about the amount of plastic waste permeating the air, water, and soil virtually everywhere on Earth. …

Rainwater samples collected across Colorado and analyzed under a microscope contained a rainbow of plastic fibers, as well as beads and shards. The findings shocked Wetherbee, who had been collecting the samples in order to study nitrogen pollution.

We eat it, we drink it, we breathe it. Does it hurt us? Hard to imagine it doesn’t, though the subject is just now coming under scrutiny, as this study published in Science Direct notes:

Microplastics have recently been detected in atmospheric fallout in Greater Paris. Due to their small size, they can be inhaled and may induce lesions in the respiratory system dependent on individual susceptibility and particle properties. Even though airborne microplastics are a new topic, several observational studies have reported the inhalation of plastic fibers and particles, especially in exposed workers, often coursing with dyspnea caused by airway and interstitial inflammatory responses.

While the authors notes that inhaled microplastic can cause respiratory lesions, dispnea (shortness of breath) and inflammation, they don’t mention the relationship of chronic inflammation with cancer.

As a result, both will be embedded in the way we die as well.