Yves here. The DNC position on elections does much to explain the 2016 California primary, which featured numerous reports by poll workers of dirty practices. Oddly, I saw two separate  videos with many detailed first person accounts  of a range of abuses which now seem to be not findable on Google. Oh, and there were no exit polls. Convenient, that. 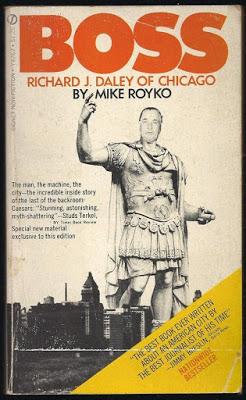 As Jimmy Breslin wrote in his blurb, this is the best book ever written about legendary Democratic Party boss Richard J. Daley, king of the smoke-filled back room deal. (Fun fact: John Belushi played a character closely based on Royko in an early Lawrence Kasden film, Continental Divide, that’s well worth watching.)

This is your periodic reminder that the “Democratic Party” is not an organization that Democratic voters belong to or have any right to control. The Democratic Party is instead a private organization, much like a club, that non-members support by giving it their money, their time and their votes. (The same is true of the “Republican Party.) All other “rights” and promises offered by the Party to its supporters, including those obligations described in the DNC charter, are not obligations at all, but voluntary gifts that can be withdrawn at any time.

At least, that’s how the DNC sees it.

Consider this report of a 2017 court filing, one that almost no one noticed, in which Sanders supporters sued the DNC for violating the section of its charter that requires DNC-run elections to be “impartial” and “evenhanded.” The DNC’s defense was, in essence, “So what?” (emphasis added below):

On April 28 the transcript [pdf] was released from the most recent hearing at a federal court in Fort Lauderdale, Fla., on the lawsuit filed on behalf of Bernie Sanders supporters against the Democratic National Committee and former DNC chair Debbie Wasserman Schultz for rigging the Democratic primaries for Hillary Clinton. Throughout the hearing, lawyers representing the DNC and Debbie Wasserman Schultz double[d] down on arguments confirming the disdain the Democratic establishment has toward Bernie Sanders supporters and any entity challenging the party’s status quo.

Shortly into the hearing, DNC attorneys claim Article V, Section 4 of the DNC Charter—stipulating that the DNC chair and their staff must ensure neutrality in the Democratic presidential primaries—is “a discretionary rule that it didn’t need to adopt to begin with.” Based on this assumption, DNC attorneys assert that the court cannot interpret, claim, or rule on anything associated with whether the DNC remains neutral in their presidential primaries.

The attorneys representing the DNC have previously argued that Sanders supporters knew the primaries were rigged, therefore annulling any potential accountability the DNC may have. In the latest hearing, they doubled down on this argument: “The Court would have to find that people who fervently supported Bernie Sanders and who purportedly didn’t know that this favoritism was going on would have not given to Mr. Sanders, to Senator Sanders, if they had known that there was this purported favoritism.” …

“People paid money in reliance on the understanding that the primary elections for the Democratic nominee—nominating process in 2016 were fair and impartial,” [Jared] Beck [the attorney representing Sanders supporters in the class action lawsuit] said. “And that’s not just a bedrock assumption that we would assume just by virtue of the fact that we live in a democracy, and we assume that our elections are run in a fair and impartial manner. But that’s what the Democratic National Committee’s own charter says. It says it in black and white. And they can’t deny that.” He added, “Not only is it in the charter, but it was stated over and over again in the media by the Democratic National Committee’s employees, including Congresswoman Wassermann Schultz, that they were, in fact, acting in compliance with the charter. And they said it again and again, and we’ve cited several instances of that in the case.”

According to this report, attorneys for the DNC argued that the DNC was not liable to Sanders supporters if they threw the primary race to Clinton, or tilted it toward her, because:

(a) Sanders supporters already knew the primary was rigged (did DNC lawyers really say that?), and

(b) the DNC charter requirement that elections be “impartial” and “evenhanded” is discretionary and not a requirement.

Shorter DNC lawyers: “We don’t have to run an evenhanded primary, even if we say we’re going to.”

DNC’s response is below. “Mr. Spiva” is Bruce Spiva, one of the DNC’s defense lawyers (emphasis mine):

THE COURT:  All right. Let me ask the defense — we’re going to go into the issue of standing now at this point.

Let me ask counsel. If a person is fraudulently induced to donate to a charitable organization, does he have standing to sue the person who induced the donation?

MR. SPIVA:  I think, your Honor, if the circumstance were such that the [charitable] organization promised that it was going to abide by some general principle, and the donee — or donor, rather, ultimately sued, because they said, Well, we don’t think you’re living up to that general principle, we don’t think you’re, you know, serving kids adequately, we think your program is — the way you’re running your program is not adequate, you know, you’re not doing it well enough, that that — that they would not have standing in that circumstance.

[On the other hand] I think if somebody — a charitable organization were to solicit funds and say, Hey, we’re gonna spend this money on after-school programs for kids, and the executive director actually put the money in their pocket and went down the street and bought a Mercedes-Benz, I think in that circumstance, they would have standing.

I think this circumstance is even one step further towards the no standing side of that, because here we’re talking about a political party and political principles and debate. And that’s an area where there’s a wealth of doctrine and case law about how that — just simply giving money does not give one standing to direct how the party conducts its affairs, or to complain about the outcomes, or whether or not the party is abiding by its own internal rules.

And I should say, your Honor, I just want to be clear, because I know it may sometimes sound like I am somehow suggesting that I think the party did not — you know, the party’s position is that it has not violated in the least this provision of its charter.

THE COURT:  I understand.

MR. SPIVA:  So I just want to get that out there. But to even determine — to make that determination would require the Court to wade into this political thicket. And — you know, which would invade its First Amendment interests, and also, I think, would raise issues — standing issues along all three prongs of the standing test.

After a legal discussion of the “three prongs,” the court asks this:

THE COURT:  And then one other question on the issue of standing for the defense. Is there a difference between a campaign promise made by a political candidate and a promise that pertains to the integrity of the primary process itself? In other words, President George H.W. Bush’s —

THE COURT:  — promise — “read my lips, no new taxes,” and then he raised taxes. Well, he could not be sued for raising taxes. But with respect to the DNC charter, Article V, Section 4, is there a difference between the two?

MR. SPIVA:  Not one — there’s obviously a difference in degree. I think your Honor — I’m not gonna — I don’t want to overreach and say that there’s no difference. But I don’t think there’s a difference that’s material in terms of how the Court should decide the question before it in terms of standing, in that this, again, goes to how the party runs itself, how it decides who it’s going to associate with, how it decides how it’s going to choose its standard bearer ultimately. In case after case, from O’Brien, to Wymbs, to Wisconsin v. LaFollette, Cousins v. Wigoda, the Supreme Court and other courts have affirmed the party’s right to make that determination. Those are internal issues that the party gets to decide basically without interference from the courts.

You know, again, if you had a charity where somebody said, Hey, I’m gonna take this money and use it for a specific purpose, X, and they pocketed it and stole the money, of course that’s different.

But here, where you have a party that’s saying, We’re gonna, you know, choose our standard bearer, and we’re gonna follow these general rules of the road, which we are voluntarily deciding, we could have — and we could have voluntarily decided that, Look, we’re gonna go into back rooms like they used to and smoke cigars and pick the candidate that way. That’s not the way it was done. But they could have. And that would have also been their right, and it would drag the Court well into party politics, internal party politics to answer those questions.

To this day the DNC believes that if it wanted to “go into back rooms” and “pick the [presidential] candidate,” this would “have been their right,” and no one outside the organization would have any right to enforce the DNC charter or interfere in any other way.

Good to know as we watch the 2020 machinations (for example, this one) unfold before us.