Exports by China, Japan, and Eurozone under pressure — in part because of globally weak demand for new vehicles, which transcends the trade war.

World trade volume – a measure of imports and exports of merchandise across the globe – declined in its zigzag manner in June to the lowest level since October 2017, according to the Merchandise World Trade Monitor by CPB Netherlands Bureau for Economic Policy Analysis. The index was down 1.4% from June 2018. This small year-over-year decline is the biggest year-over-year decline since the Financial Crisis, and it’s a reversal from the heady growth in 2017 and 2018 that had topped out at 6.7%.

A theme emerges: World trade, rather than growing in leaps and bounds as it had done during peak globalization in 2017 and 2018 (which had followed a period of trade stagnation in 2015 and 2016) has now entered its first decline phase since the Financial Crisis. But it’s still a relatively tame decline, reflecting the manufacturing slowdown in the US, the EU, China, Japan, South Korea, and other countries, and not a global crisis. What happened to trade during a global crisis is clear in the chart: 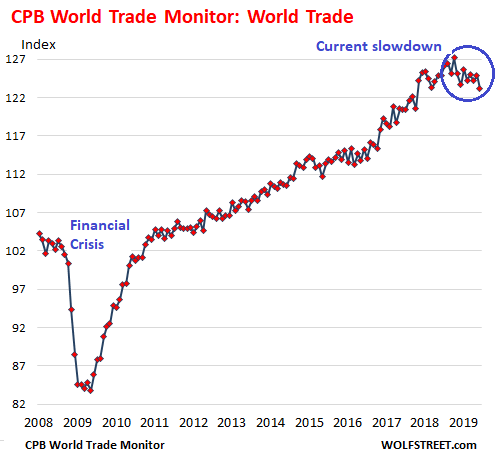 That this year-over-year decline is still so tame, despite the explosive trade-war rhetoric, pandemic threatened and actual tit-for-tat tariffs, and even tech embargos, is largely due to companies having found ways to brush off the rhetoric, dodge some of the tariffs, shift parts of their supply chains around, or push up the tariffs into their supply chains.

By comparison, what happened during the Global Financial Crisis was a “collapse” of world trade when companies – uncertain if the banking system would still stand the next day – shut down their ordering process. This was when American consumers lost their jobs by the millions and curtailed their spending, and when car sales collapsed. From September 2008 through the trough in May 2009, the World Trade Monitor index had plunged 17.5%.

But so far in 2019, there are no signs that the American consumer has pulled back. And despite the trade war, the index has declined only 3.1% so far from the one-month peak.

The US economy is dominated by services, such as finance, healthcare, information services (such as telecoms), professional services (such as computer programming, lawyering, and engineering), housing, and myriad others. And despite the manufacturing slowdown, services are growing at a solid pace. About 70% of what consumers spend their money on is on services, leaving the US as the cleanest dirty shirt.

China is experiencing a slowdown in exports that started last fall. In recent years, exports continued to rise from September through June. But not this time. Exports to the rest of the world fell 3.5% from September 2018 through June 2019, according to the World Trade Monitor data for China, which I converted to a three-month moving average to smoothen out the vary large month-to-month ups and downs of the data. The regular spikes in the chart are related to the Chinese New Year. Note the 24% plunge during the Financial Crisis: 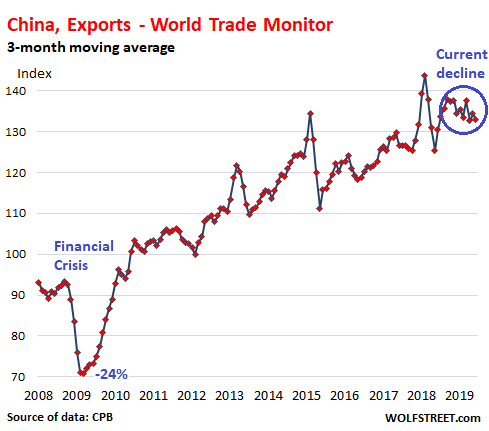 But on a year-over-year basis, exports in June were up 2.3% from June last year and marked the highest June on record. So for now, the decline in exports since September hasn’t yet totally wiped out the gains earlier last year. But the trend is in the wrong direction.

Imports to China from the rest of the world show a similar but harsher picture: Imports in June fell 2.4% year-over-year and are down 6.8% from the peak in September 2018, which would be a sign of weakening internal demand in China: 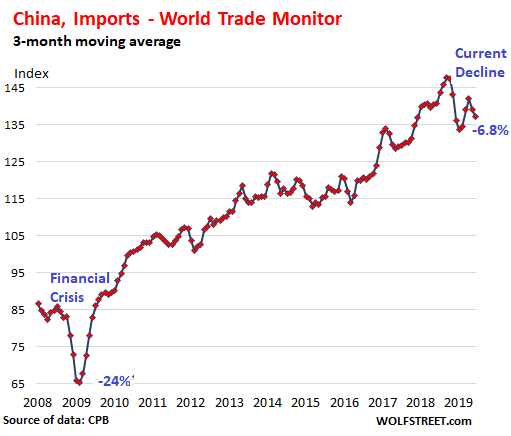 Japan’s exports have been declining slowly but surely since the beginning of 2018. In June, on a three-month moving average basis, exports had dropped 3.0% from January 2018. But that drop pales compared to the export collapse during the Financial Crisis and the sharp drop following the March 2011 earthquake and tsunami, when Japan’s infrastructure was severely damaged: 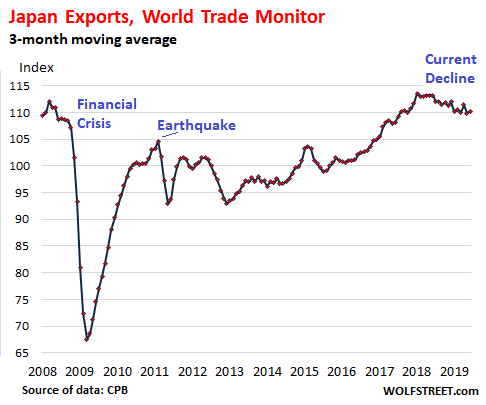 But Japan’s imports have continued to meander higher. The three-month moving average of the index reached a new high in May and ticked down a smidgen June: 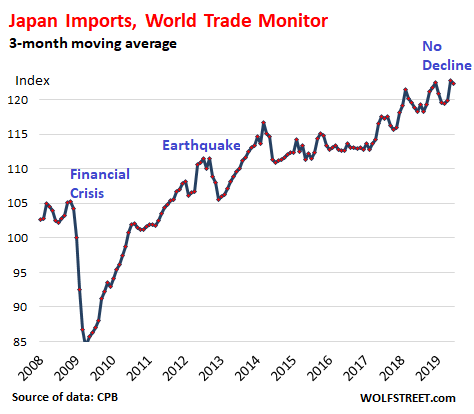 Exports from the Eurozone have declined since January 2018 – but only 1.7%. This was driven by a sharper slowdown in exports of German autos, auto components, and industrial products, softened by increases in exports from other Eurozone members, whose exports also include food, such as olive oil, salami, cheese, and other specialty foods, or wine, and there is no slowdown in food products.

Imports into the Eurozone have remained roughly flat since January 2018. The chart combines imports and exports indices. Note the big impact of the euro debt crisis on imports (red line) though it had little or no impact on exports: 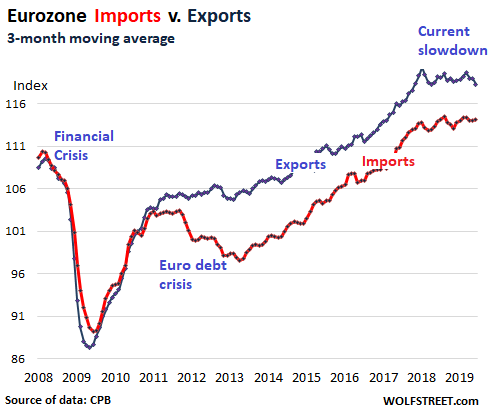 So I get this picture of global trade: Companies are rethinking their supply chains. But actually shifting them from China to Vietnam or Bangladesh or even back to the US is a slow process that has barely started. And it’s a complicated process, shifting large scale manufacturing to countries whose manufacturing and export infrastructure is inadequate to manufacture and export on the scale of China. And so this will take a while.

And the global slowdown in demand for new vehicles – which impacts not only assembled new vehicles but components and materials that crisscross the world – is hitting exports from Germany, Japan, China, and South Korea. But that slowdown in demand for new vehicles is a result of other factors than the trade war, and in developed countries, and even in China, it is becoming structural and includes factors such as saturation. So even a resolution of the trade war won’t help the auto sector. Here are some samples of the challenges the global auto industry is facing:

China Auto Sales Spiral Down, But This Time It’s Different: Government Refuses to Bail Them Out with Big-Fat Incentives

New-Vehicle Sales in the US Fall to 1999 Levels: How to Grow Revenues After 20 Years of Stagnation (Yup, You Guessed It)