Yves here. Wellie, this story confirms my instincts about Jay Inslee, that anyone who was a fan of the scapegoating, educational-attainment-and-resume-fabricator Marcie Frost could not be all he was cracked up to be. Readers in Washington pointed out that he was a staunch neoliberal. But worse, he’s a flagrant hypocrite on his big issue, climate change. 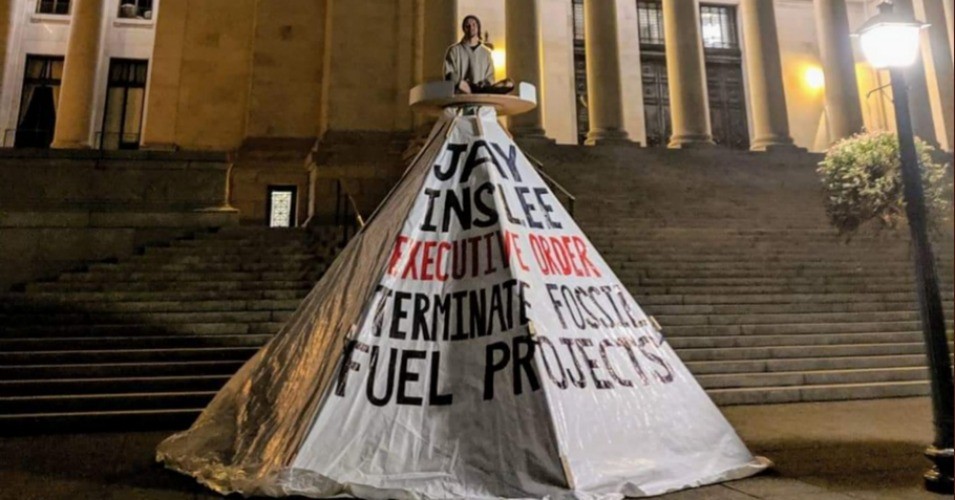 Washington Gov. Jay Inslee won praise during his now-ended, five-month presidential campaign for setting the tone of the climate debate in the 2020 Democratic primary and forcing other candidates to propose bold climate action—but on Tuesday, indigenous residents of his own state demanded the governor make his commitment clear at home.

Indigenous Protectors of the Salish Sea assembled in Olympia on Tuesday outside the Washington State Capitol—a building that stands on Nisqually tribal land—and called on Inslee to declare a climate emergency in the state and end all fossil fuel projects in the state.

Inslee is “breaking all of the treaties with Washington State Tribes by contributing to climate chaos that is causing the shallowing and warming of our rivers and estuaries which in turn is causing salmon populations to go into shock and die,” the Indigenous Protectors for the Salish Sea said in a statement.

The campaigners erected indigenous structures outside the capitol and announced they would not leave until Inslee met their demands and demonstrated commitment to honoring treaty agreements.

Indigenous Protectors of the Salish Sea have returned to St,Chas Nisqually village site, erecting indigenous structures and they say they will not leave until @GovInslee is prepared to take action on their demands including declaring a climate emergency. pic.twitter.com/y8L0lTWr08

The Protectors of the Salish Sea walk has arrived at the Dept. of Ecology. Our coalition is encouraging that they deny the permit for the Kalama Fracked Gas to methanol refinery. #ClimateAction pic.twitter.com/ZHNyEpuBpG

The Indigenous Protectors also called on the governor to convene a special legislative session to address the climate crisis, including the voices of “youth, indigenous leaders and other communities in Washington who are disproportionately affected by climate change.”

The projects, his critics charge, run counter to Inslee’s public image as a climate leader and violate the trust of Washington residents, especially indigenous people, placed in him when they voted him into office in 2012.

“If Inslee wants to be a truly progressive person he cannot continue to support fossil fuel expansion,” Paul Cheyokten Wagner, co-founder of Protectors of the Salish Sea, said in a statement. “Our children, his children, all children, deserve a future free of the threat of climate disaster and toxic water. It’s their birthright. Unless he turns it around and stops these projects then he’s lobbying against his own children’s birthright.”

The demonstration at the capitol comes four days after the Protectors of the Salish Sea began a four-day, 40-mile trek from Puyallup land in Tacoma where the LNG containment tank is currently halfway-built. Puyallup leaders call the project an “environmental injustice” and that fracked gas leaks at the site could harm water supplies and air quality.

As they began their journey on Friday, the group was cheered on by students and adults who attended the Global Climate Strike in Washington along with four million other people around the world, demanding an end to fossil fuel projects and shift to renewable energy.

“As our governor,” wrote the Indigenous Protectors in a letter to Inslee, “you bear the responsibility to uphold the supreme law of the land laid out in the treaties between the U.S. government, U.S. citizens, and Washington Treaty Tribes by deescalating the largest existential threat to all life—our current climate emergency, which is resulting in the displacement and cultural genocide of indigenous peoples around the globe.”