Lambert here: If Sanders wants to appeal to a no-longer-young demographic, here it is: Precarious old codgers. (For myself, I want to write ’til I drop, because shuffleboard is a death sentence, but I recognize that I’m an outlier.)

By Julianne Geiger, a veteran editor, writer and researcher for Safehaven.com. Originally published at SaveHaven.

The US Bureau of Labor Statistics is predicting a major increase over the next 10 years in the number of age 75-and-older workers in the workforce.

The increase, from last year’s 1.8 million workers who are 75 or older to 3.7 million in 2028, shows a remarkable 105% growth rate for that demographic. The second largest growth rate for the next 10 years will come from those workers aged 65 to 74, at 51% growth.

In a nutshell, those who are 65 and older are simply staying in the workforce longer.

There is no growth expected from those in the 45-64 bracket, and—it may come as a surprise—there is no change expected in the 25-34 age bracket, either. 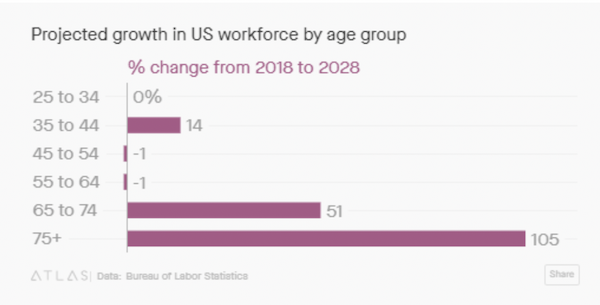 For labor force participation rates, there is actually negative growth expected from those age 16 to 24, declining to 51 percent by 2028.

Part of the shift from younger to older workforce is because the younger demographic is expected to stay in school longer, living up to their reputation as one of the most educated generations. The other reason is that the older generation is working in jobs traditionally held by younger workers. 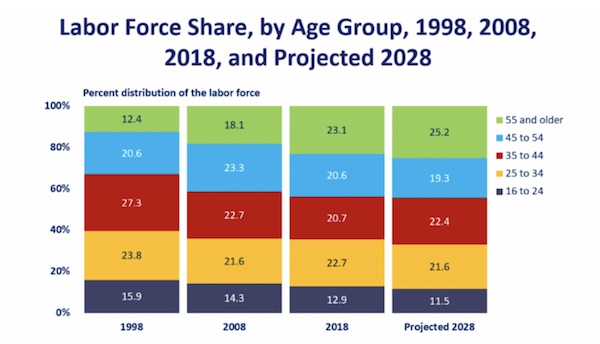 Source: US Bureau of Labor Statistics

So, what’s behind the sharp increase that is expected in the oldest work-age demographic?

Money, money, money. The 55 and older crowd is not financially prepared to bow out of the workforce. The idea of the private pension is dead. And many this age haven’t saved enough for retirement. The result is that they are working longer and longer.

Increased life expectancy. People are living longer in general, meaning this age group is growing. The average life expectancy in the United States as of 2016 was 78.69 years old. The trend just in the last three years is flat, but over the last decade or couple of decades, the upward trend is clear.

People that age are healthier than they were a decade or two ago. People are smoking less, eating healthier, and are getting more—and better—vaccinations such as for Hep B and chickenpox. There are also better diagnostic tools such as the MRI that wasn’t available way back in the 70s. This means people are capable of working longer because they are physically able to. Other things such as seat belt laws, nutrition fact labeling, organic food choices, and a reduction in the number of HIV/Aids cases all contribute to increasing life expectancy and/or increased health.

Satisfaction. Some people are working longer just because they like their job. Job satisfaction has reached the highest level in two decades, thanks to the improved labor market. In fact, according to the most recent version of The Conference Board survey, 54% of US workers are satisfied with their employment. The increase in job satisfaction for the year represents the second-largest increase in the survey’s 32-year history, according to Industry Week.

The last reason for the shift is likely due to the decrease in labor-intensive employment.

“As much as we like to talk about millennials, the future of work is much older,” Roy Bahat, head of Bloomberg Beta and co-chair of Shift: The Commission on Work, Workers and Technology, told attendees at the Milken Institute’s Global Conference last year, according to Forbes.