Yves here. To put the cost of Sanders’ Green New Deal plan in context, it’s roughly what we spend on the US military when you throw in all the black budgets. Yet we somehow can’t afford to save the climate, particularly, as the article points out, the “cost” pays for itself?

But sadly, as some readers pointed out at the Bailey Island meetup, the climate scientists they know all say it’s too late. All we can do now is arrest further damage and work on mitigation of the impact. 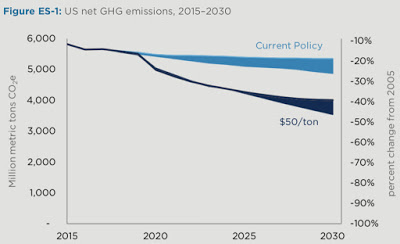 The amount of carbon tax — a neoliberal solution — required to achieve just a modest reduction in U.S. greenhouse gas emissions by 2030 (source). Bernie Sanders wants to reach 100 percent renewableenergy for electricity and transportation by no later than 2030 and complete decarbonization no later than 2050. One of those two ideas just might solve the problem, and the other has not a prayer of working.

Every report on the release of Bernie Sanders’ Green New Deal plancontains at least one quote in which someone is shocked, dismayed or dismissive about the cost — $16 trillion in total — even though the plan will, as the proposal itself says, “pay for itself” in a number of ways:

The proposal goes on to note (emphasis mine):

But spending $16 trillion to save $34 trillion? Those are scary numbers, no matter which side of the cost-benefit equation they’re on. The mind shuts down contemplating them, and Sanders’ opponents are hoping voters will be so frightened of of either one, they won’t begin to consider the importance of the moon-shot-type project he’s proposing.

The problem is, $34 trillion isn’t the actual number, the actual cost of not addressing the climate crisis. Try ten times as much. The real cost of inaction is above $500 trillion.

The Cost of Climate Change

Consider this, from that famously alarmist, extremely hard-left news source Axios, in a piece entitled “The cost of climate change.” They begin with the obvious fact — the amount of wealth that exists on the planet today:

And then the obvious conclusion: All of it is at risk if the climate goes south while we go north (or vice versa). Actually, more than all of it if future wealth is considered.

The big picture: All of that wealth comes, ultimately, from the planet, and the climate. Specifically, it has come from a stable climate. William Nordhaus points out in his 2013 book “The Climate Casino” that “the last 7,000 years have been the most stable climatic period in more than 100,000 years.” The last 7,000 years have also seen the rise of civilization and the creation of that $500 trillion in wealth. This is not a coincidence.

The bottom line for Axios: “Human civilization has reached the very end of reaping the dividends from a stable climate. Compared to recent decades, the world in 2100 will have a 13% reduction in crop yields (and those crops will also be less nutritious); it will also have 2.8 billion more people at risk from drought in any given month.”

The Axios solutions all come from the neoliberal playbook — encourage the market to address the problem via carbon taxes, and so on — with not a word about more forceful responses like ending carbon subsidies, getting carbon-fueled cars and truck off the road, and mandating the conversion power sources to alternative energy, as the Sanders plan contemplates.

Still, the good neoliberal folks at Axios get it. More than $500 trillion in wealth will disappear if we fail to address the coming climate crisis.

Now all they need to get is the need to force the solution, and not just encourage it.