The BBC and others are reporting what should come as no surprise to Naked Capitalism readers: Boris Johnson’s efforts to force crunch negotiations over the October EU Council meeting are not going to happen because they were never going to happen. The EU doesn’t do treaties that way. Donald Tusk in New York stated that the Government needs to come up with shortly after the Tory conference ends, which would seem to mean the end of next week at the very latest. In the meantime, it delivered a fourth non-paper.

Reuters reports that Barnier told EU 27 ministers that it is still waiting for a proposal and “workable ideas”. The UK press is still digesting Boris Johnson’s stunning slap at an MP who criticized Johnson for calling the Benn Act a “surrender bill” in light of the murder of Labour MP Jo Cox. The Telegraph says that EU officials saw the performance and are “in despair” at the spectacle of Johnson alienating Parliament.

In the meantime, Richard North describes how the supposedly urgent need to get Parliament back in business is belied by MPs collectively being missing in action. From his site: 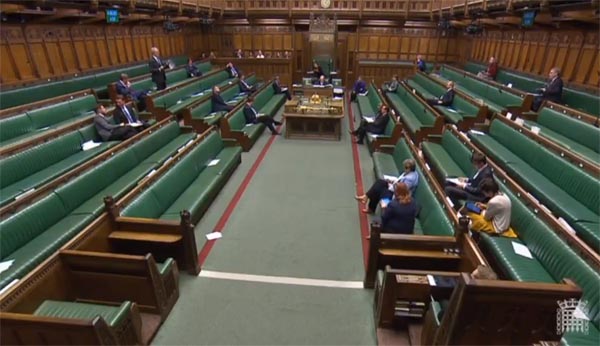 In what must qualify as the understatement of the century, the Speaker observed at the beginning of business in the Commons yesterday that, “I think there is a widespread sense across the House and beyond that, yesterday, the House did itself no credit”.

BrexitCentral’s daily e-mail is full of fevered thoughts as to how Johnson could defy the Benn Act. I’m skipping over the hyperventilating in the long editorial section at the top: 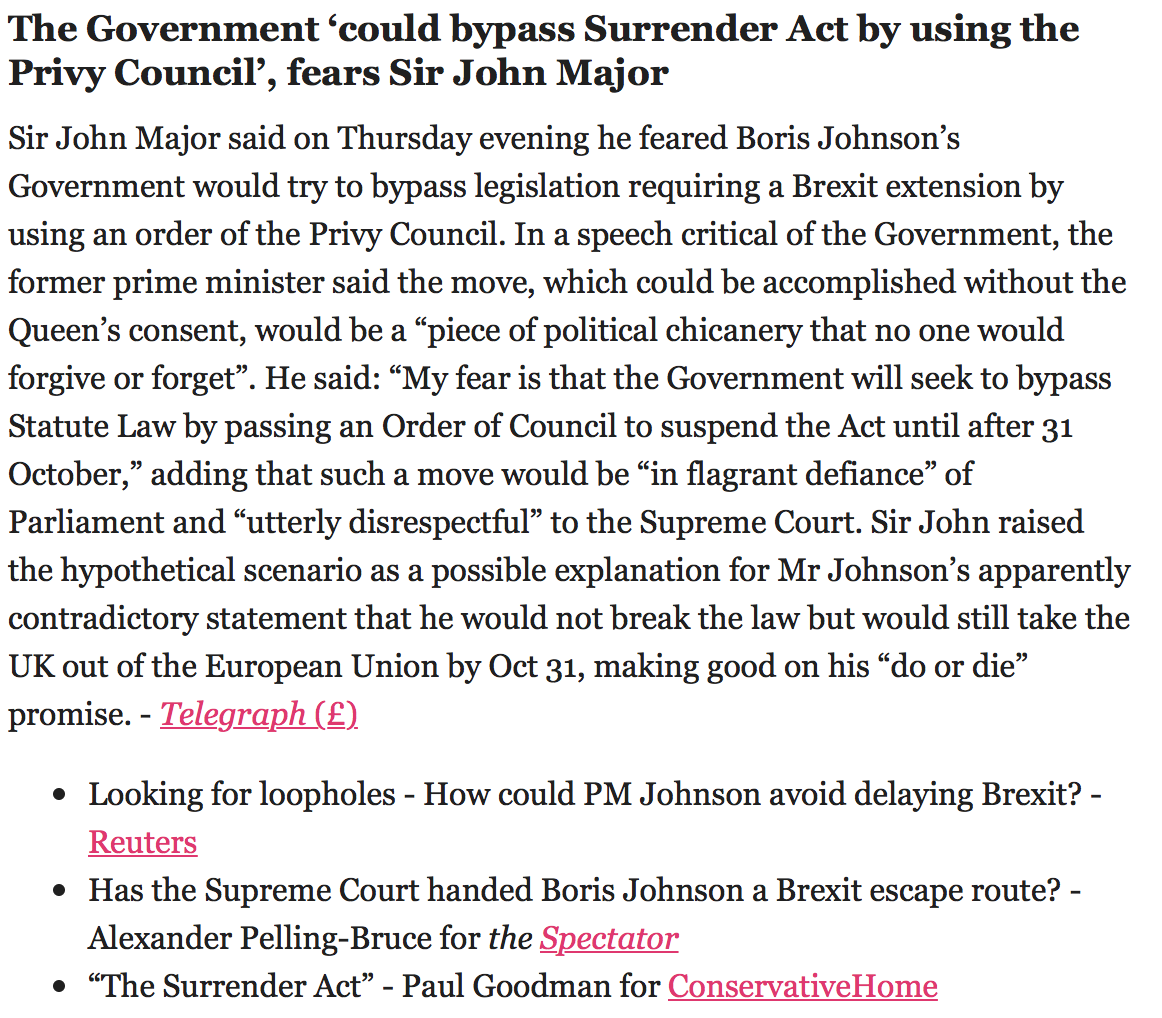 At this point, vlade’s view of where things are going seems as good as any. Via e-mail:

Even BBC is now catching up:

As EU watches open-mouthed the scenes in Westminster.. in Paris, Berlin, Dublin, Brussels and the rest – leaders are asking: What Next?? And since no one knows for sure, there’s some contingency planning going on /1

Some interesting points:
– The EU would loathe to break precedent that it deals only with executive, not legislative, as that would drag it into domestic politics (not just in the UK)
– but refusing to say what it would do if the PM would refuse and extension and the UK court would order someone else to accept it; the court can’t order a Queen (she’s technically above law), but it can ask her prettily.
– hope for elections later this year with a deal by the end of the year (so sounds like it could say yes to an end-of-the-year extension)

If the EU’s betting on the election leading anywhere, they are IMO more deluded than they seemed to have been during all this process. i.e. on the current aggregate preferences (which, as we know, in FPTP mean way less than in PR) there is better than even chance for either a Tory led or no government.

That said, if the EU took in an extension acceptance from anyone else than the government, it would pave way for another extension in case of inconclusive GE – but still, what the hell that would be for except to prolong the misery on both sides (and make no-deal more likely, as in any other GE it would almost certainly play into Johnson’s hands).

As much as I hate to say it, I believe that the best for the UK would now be a GE in early November, with the extension no longer than EOY. Either the anti-Tory coalition wins, and then it can ask for a long extension to arrange the referendum (because it would be in their manifestos), or Tories win meaning no-deal, or it’s clear there’s not going to be a resolution anytime soon, so a stark choice between no-deal or May’s WA is given to the MPs. The EU’s kick-the-can-down-the-road is not doing anyone’s any favours.

Do be sure to read the BBC tweetstorm. It suggests that Boris could put up a big show at the EU Council intended for UK consumption, and then resign so he could claim all sorts of dastardly forces stopped him from delivering his glorious Halloween Brexit and better position himself (and hopefully the Tories) for a general election.

At this point, I don’t think anyone can attempt to steer this process. Johnson is effectively a hostage in No. 10, yet the opposition is divided and on top of that, Parliament isn’t even remotely set up to step in and play executive, even on narrow tasks. This section of Dune, when Imperial planetary ecologist gone native Liet Kynes, is hallucinating after being abandoned in the desert, seems apt:

Then, as his planet killed him, it occurred to Kynes that his father and all the other scientists were wrong, that the most persistent principles of the universe were accident and error.