by Lambert Strether of Corrente

Elizabeth Warren posted her health care plan to her campaign site on September 12, the morning of the third Democrat presidential debate. This will be a short post, since there’s not much to it, and what is missing is more notable than what is present. Here it is.

Does Warren Support Any Existing “Medicare for All” Bill?

Here is a handy chart of all the health care bills in the hopper from Vox; you will see there are two single payer/Medicare for All bills: 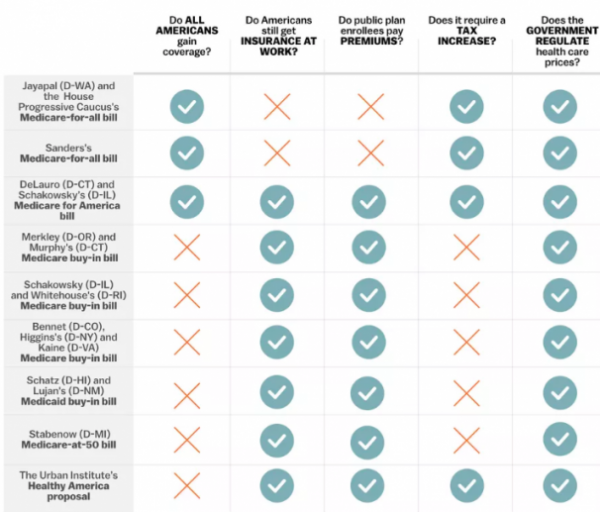 One bill is HR1384 (Jayapal); the other is S1129 (Sanders). They are not identical. (Jayapal’s bill is better, for reasons I explain here.) Does Warren support both? One? Neither? This is her campaign site, and she does not say. How can you have a “plan” that doesn’t even mention proposed legislation?

Does Warren believe that “Medicare for All” means “Single Payer”?

Grizzled veterans of the fight for single payer will remember that “Medicare for All” was adopted for branding purposes, since Medicare is a well-known and supported program, and “single payer” is wonky and requires explanation. However, readers will also be aware that Medicare suffers from a neoliberal infestation, and that key features like “free at the point of care” (i.e., no co-pays or deductibles) that single payer advocates regard as essential are missing from it. Further, liberal Democrats (as in 2009) have introduced considerable brand confusion, as with Neera Tanden’s “Medicare Extra,” “Medicare for All,” and so forth. Jacobin comments:

[I]t’s not intuitively obvious what “single payer” means, or why one payer would be more equitable and efficient than multiple payers. “Medicare for All” is essentially a way to quickly describe the concept to an American audience, for whom the federal Medicare program is a familiar referent. The robust single-payer system conceptualized in Sanders’s and Jayapal’s bills goes much further than existing Medicare, which includes significant cost-sharing and large roles for private insurers. But that’s too much to squeeze onto a campaign button.

As a slogan, “Medicare for All” has proven to be popular but porous: it polls differently depending on how questions are phrased or what elements of the plan are emphasized, and has also been widely co-opted. Candidates like Kirsten Gillibrand and Kamala Harris have both claimed to support “Medicare for All,” only to clarify later they meant something akin to an optional buy-in to a Medicare-esque program. The Center for American Progress’s “Medicare Extra,” eventually put into bill form under the title “Medicare for America,” likewise draws on the popularity of “Medicare for All” while describing a significantly watered-down version of what Sanders and Jayapal mean by the phrase.

So, it’s really not enough for Warren to say “I support Medicare for All,” because Gillibrand and Harris both said that, and didn’t (Harris backing off in particularly crude fashion). It’s especially not enough when there are two Medicare for All bills on the table, and Warren refuses to say that she supports either one. Here’s Warren crawfishing in a particularly obvious way; the reporter doesn’t call her on it, naturally:

Asked if she will present her own health care plan, @senwarren says she already supports Medicare for All: &quot;This isn&#39;t some kind of contest&quot; #DemDebate https://t.co/Ffui0utwux pic.twitter.com/dIhqHZxGTK

“I support a lot of plans.” C’mon, man. All that said, here is the heart of Warren’s plan, which would be more fairly characterized as a set of aspirations, rather than a plan:

Elizabeth supports Medicare for All, which would provide all Americans with a public health care program[a]. Medicare for All is the best way[b] to give every single person in this country a guarantee[c] of high-quality health care. Everybody is covered[d]. Nobody goes broke because of a medical bill. No more fighting with insurance companies[e].

[a] We have heard the claim of universality before; ObamaCare advocates claimed that ObamaCare provided universal coverage long after it was obvious that it did not.

[c] “Provide” a “guarantee” is not the same thing as universal enrollment; an advocate could make the case that any of the plans on the Vox chart above met this aspiration.

[d] “Covered” by what? A universal benefit, or a mix of public and private insurance (again, remember, capable of being branded as “Medicare for All”).

[e] “No more fighting with the insurance companies” implies, but most definitely does not state, that there will be no role for private health insurance (except for edge case niche markets).

The basic business model of an insurance company is to take in as much money as you can in premiums and paying out as little as possible in health care coverage.

Why is this paragraph even here?

That leaves families with rising premiums, high deductibles[a], and fighting with insurance companies to try to get the health care that their doctors say they and their children need.

[a] Implies, but most definitely does not state, that Warren’s version of Medicare for All, whatever it turns out to be, will have no deductibles (or co-pays). Jayapal’s bill has “no deductibles, coinsurance, copays, or similar charges.” The Sanders bill is the same, except for a cost-sharing maximum of $200 for pharmaceuticals. Presumably Warren, a careful writer, would have said “free at the point of care” if she intended for that. So what does she intend?

Insurers protecting their bottom lines restrict your networks of providers and stand in the way when you want to see your doctor or need to see a specialist without going broke.

[a] Implies, but most definitely does not state, that there will be no role for insurers (i.e., multiple payers, not a single one).

Medicare for All solves these problems. Everyone can see the doctor they need. Nobody goes broke. And your doctor gets paid by Medicare instead of fighting with an insurance company[a].

[a] Implies, but most definitely does not state, that there will be no role for insurers (i.e., multiple payers, not a single one).

Every American should be able to get the care they need when they need it. This is a goal worth fighting for, and Elizabeth is in this fight all the way. That’s why Elizabeth will fight for[a] Medicare for All.

Above, we saw the following artfully worded passage from Warren’s “plan”:

Medicare for All solves these problems. Everyone can see the doctor they need. Nobody goes broke. And your doctor gets paid by Medicare instead of fighting with an insurance company[a].

[a] Implies, but most definitely does not state, that there will be no role for insurers (i.e., multiple payer, not a single one).

And so we read on, and come to this:

Across the country, barriers to coverage, disappearing hospitals and health facilities, and a shortage of health professionals are denying rural communities the high-quality health care they deserve. Medicare for All will mean access to primary care and lower health costs for patients — and less uncompensated care for rural hospitals, helping them stay afloat.

Ah, “access.” Our favorite word. Moreover, “lower health costs for patients.” Why would there be “lower health costs”? Who will be billing patients for what, and why? Will there be co-pays, deductibles, coinsurance, and other similar charges? Will there, in fact, be a role for private health insurance, perhaps heavily regulated? Why would there be any “uncompensated care” at all, if in fact by “Medicare for All” Warren means a universal benefit? We can’t know, because Warren doesn’t say. What I say is that you should go back through Warren’s prose in the previous section and assume that her answer to the question “Does Warren believe that ‘Medicare for All’ means ‘Single Payer'”? is not “Yes,” but “No,” that there will be a role for insurers (multiple payers), and that she supports complex elibility requirements like co-pays and deductibles.

Warren: Still crawfishing on health care. She should come out with, well, a plan. Say, to support either Jayapal’s bill or Sanders’ bill?