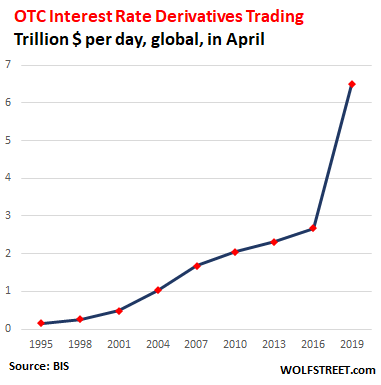 OTC derivatives are securities that are generally traded through a dealer network rather than on a centralized exchange such as the London Stock Exchange or the New York Stock Exchange.

Some derivatives can be explosive, such as the credit default swaps (CDS) that brought Lehman Brothers and AIG to their knees in the last crisis, and which still remain a threat today, especially with the U.S. government this week bowing to Wall Street pressure to dilute regulation that had been designed after the crisis to reduce the risks of these instruments.

Interest rate derivatives, whose value rises and falls depending on the movement of interest rates, or sets of interest rates, tend to be more straightforward. They are often used as hedges by institutional and retail investors, banks and companies to protect themselves against changes in market interest rates. If managed properly, they shouldn’t pose undue risks to the financial system.

The BIS attributed much of this 141% three-year surge in trading of these instruments to increased hedging and positioning “amid shifting prospects for growth and monetary policy.” It also cautioned that some of the turnover in April 2019 was in shorter-term contracts, which are rolled over more often, leading to higher volume of trades. The 2019 survey also featured more comprehensive reporting of related party trades than in previous surveys. After adjusting for these trades, the actual increase in trading volumes since the 2016 survey is more likely to be around 120%, the BIS concluded.

Here’s where most of the trading OTC interest rate derivatives took place: 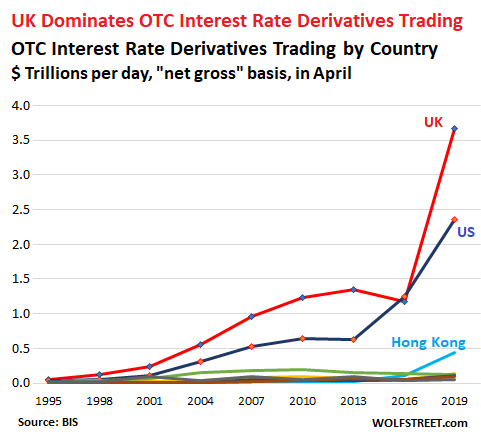 The U.S. and the UK combined accounted for 82% of total turnover of interest rate derivatives in April this year, up from 79% in 2016. Even after three years of regulatory tussles with its biggest trading partner, the EU, the UK has not only maintained its grip on the vast and fast growing OTC derivatives markets, it’s strengthened it, pulling away from New York and leaving Paris in the dust.

“London is the capital of capital and this report shows that despite challenging times, the fundamentals of the City remain strong,” saidCatherine McGuinness, policy chair at the City of London Corporation, the municipal governing body.

The UK trading also dominates in global currency markets, albeit not quite as much. In April 2019, its FX trading desks generated a turnover of $3.58 trillion per day, up from $2.41 trillion per day in 2016, taking its share of total global FX activity from 37% to 43%. By contrast, the US share of trading declined during the same period from 20% to 17%.

That London has also managed to increase its share of trading euro-denominated interest rate swaps, accounting for 86% of the global total, up from 75% in 2016, will be of particular concern to Brussels. For years, the French government, together with the ECB, have sought to wrest control of the trading and clearing of euro-denominated transactions from the City of London, for mainly justifiable reasons. And Brexit was supposed to provide the perfect alibi. But alas, as this BIS report emphatically shows, it hasn’t happened yet!