Yves here. The authors of this study get points for finding a natural experiment on privatizing Medicaid, namely Texas starting in 2007. Although the findings and detail are valuable, I have doubts about the way they framed one of their conclusions. One reason privatized Medicaid delivered better results in Texas than the old government-run version is that Texas had a punitive limit on prescriptions of three meds a month. That limit was removed when Medicare was made private.

Texas could just as easily have lifted that restriction on its own without privatizing Medicare, so it isn’t clear that the benefits of that change should be attributed to privatization. It’s analogous to the false claim regularly bandied about by the press and even supposed bank experts, that big banks are more efficient. That’s not true once you pass a pretty low size threshold. But that’s the excuse for tons of bank mergers, when the real reason is the people running bigger and more complicated banks get paid more.

True, the merged bank goes through headcount cutting, but the canard is the merger made that possible or necessary. In fact, the cost data shows the two old banks could have created the same efficiencies on their own. but it’s easier to clean house after a big deal.

There is much debate, and nowhere more than in the US, about whether public services such as healthcare should be provided by private companies, which may offer greater efficiencies but which are more susceptible to moral hazard and adverse selection of consumers. This column uses evidence from a provision change in Texas to show that contracting healthcare provision out to private companies increased the level of care patients received, but increased overall costs for the government.

Whether public services should be provided directly by the government or contracted out to private firms is a central debate in public finance and public policy around the world. Private provision of public services is common in education, healthcare, defence, and, in the US, even in incarceration. In other areas – including social security, disability insurance, and infrastructure development – governments have considered private provision as a possible way to improve efficiency. As the US and other developed countries grapple with the rising complexity and costs of healthcare, the debate over whether healthcare services and health insurance programmes are more efficiently provided by the government or by competing private firms has become a crucial question.

Proponents of the private provision of social insurance argue that the competition of private plans will produce better outcomes. The competing plans are incentivised to keep costs low and ration care efficiently because they get to keep savings and because they want to attract enrolees. There is empirical evidence that these arguments can have merit in some contexts (Newhouse and McGuire 2014, Dranove et al. 2017, Curto et al. 2019). Opponents of the private provision of social insurance argue that competition may not be strong enough and regulation may be too lax, leading to potentially more expensive and lower quality care. Further, there are concerns that adverse selection can incentivise private plans to inefficiently design contracts or engage in other efforts to keep costly enrolees away. There is empirical evidence that these concerns should be taken seriously (Curto et al. 2014, Duggan et al. 2016, Cabral et al. 2018, Duggan and Hayford 2013, Aizer et al. 2007, Geruso and Layton 2017, Kuziemko et al. 2018).

Within the US healthcare system, Medicaid is the setting where the question of private vs. public provision of health insurance is most policy relevant. Over 43 million Medicaid beneficiaries receive their health insurance benefits from a private health plan, with $162 billion paid to these plans each year (Centers for Medicare and Medicaid Services, 2016). Our focus on the disabled Medicaid population is also important. In 2014, Medicaid spending for this population amounted to almost $187 billion or 40% of total Medicaid spending, even though individuals with disabilities make up only 13.5% of total Medicaid enrolment (Kaiser Family Foundation 2014a,b). While most states have already shifted healthier Medicaid populations to private plans, the transition of individuals with disabilities to private plans is either recent, ongoing, or currently under consideration. Despite this, we know relatively little about the effects of private provision on this population.

In 2007, Texas moved disabled Medicaid beneficiaries from a public fee-for-service plan to private managed care plans. This reform was implemented in only a subset of counties, and our research compares the counties where beneficiaries were put into private plans to neighbouring counties where they stayed in the public plan.

We find clear evidence that private plans rationed healthcare services to a lesser degree than the public Medicaid programme. Specifically, we show that private provision led to 30% higher spending on prescription drugs (Figure 1a). This increase came from drug categories that are generally considered valuable for treating chronic conditions that are common in the low-income disabled population that we study, such as insulin, antipsychotics, anti-depressants, statins, and asthma and pain medications.

What might explain this large increase in prescription drug consumption after privatisation? We think that it is a consequence of institutional features of the public Medicaid programme in Texas. Beneficiaries in Texas’s public Medicaid programme have a three-drug cap on the number of drugs they can use in a month. We show that the removal of this cap under the privately managed care plans explains most of the increase in prescription drug spending. The number of months when people use more than 3 drugs increased significantly while the number of months when people use more than 0, 1, or 2 drugs increases only slightly (Figure 1b), suggesting that the cap in the public plan was binding for a substantial number of beneficiaries.

Figure 1 The impact of Medicaid privatisation on prescription drug spending 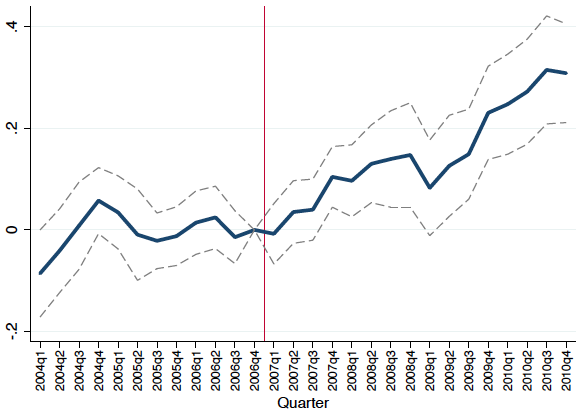 (b) The three-drug cap was binding 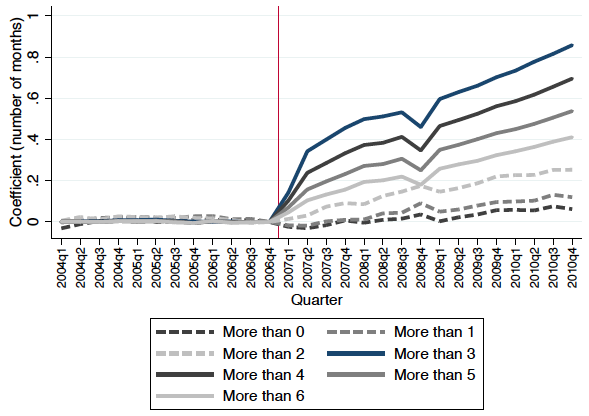 Privatisation also led to an increase in outpatient spending (Figure 2a). This increase resulted from a combination of 8% higher unit prices paid by private insurance companies to healthcare providers and an 8% increase in the quantity of services provided. In fact, the increased quantity of outpatient services utilisation could have come partly as a direct result of higher unit prices to providers, as these could have led to increased care access. In addition, we document a decrease in inpatient spending of at least 8% (Figure 2b). We further show that this decrease was concentrated among inpatient stays for conditions treated by the same drugs that beneficiaries got better access to post-privatisation. Taken together, these results suggest that the decreased inpatient spending could be indicative of improvements in care quality, as these could reflect reductions in avoidable hospitalisations through greater use of chronic disease-related drugs.

(a) Number of outpatient days increased 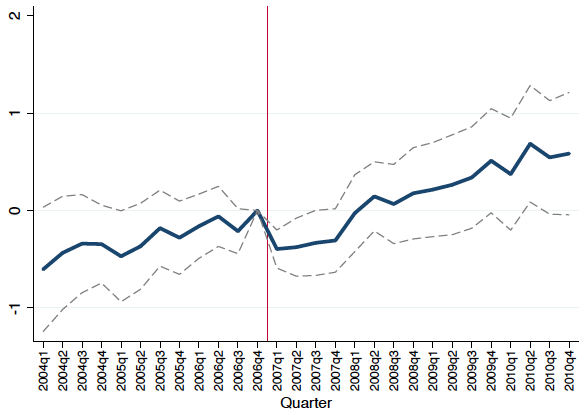 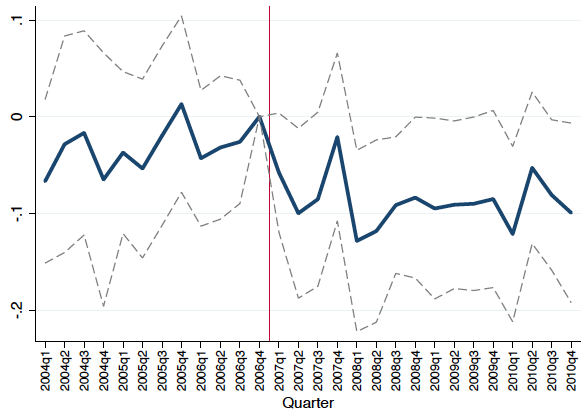 This improvement in care quality came at a price for the government, however. Total spending was 12% higher under private provision. We show that this spending increase came through Texas paying private plans more than it would have paid out in counterfactual fee-for-service payments under public provision. Importantly however, we find that the vast majority (80%) of this spending increase in Texas was passed-through to providers and beneficiaries, in the form of additional healthcare services and higher provider reimbursement rates. Overall, our results suggest that the privatisation of social insurance programmes has more nuanced effects than previously recognised, and therefore warrants more nuanced policy debate. Our findings suggest that private provision does not always reduce costs or reduce quality.

Instead, its effect is dependent on the specific context and private coverage design, and ultimately involves cost-quality trade-offs. Indeed, our results suggest that when public programmes are stingy and exhibit extreme forms of rationing (as in Texas’s three drugs per month cap), privatisation can improve outcomes for beneficiaries, albeit at the cost of higher spending. We believe this can occur due to a complex political economy problem – conservative state legislators only agree to higher programme spending if the programme is privatised, under the assumption that both marginal and inframarginal dollars will be spent more efficiently under private provision. This suggests that the effects of privatisation may vary substantially, depending not only on the design of the privatised programme but also on the design of the public programme that the privatised programme is replacing.

Authors’ note: We gratefully acknowledge financial support from the Laura and John Arnold Foundation, the Social Security Administration through grant #5 DRC12000002-06 to the National Bureau of Economic Research as part of the SSA Disability Research Consortium, the National Institute on Aging (P30-AG012810), and the Agency for Healthcare Research and Quality (K01-HS25786-01). The findings and conclusions expressed are solely those of the authors and do not represent the opinions or policy of SSA, any agency of the Federal Government, or the National Bureau of Economic Research.