Yves here. Readers will notice a marked disconnect between Michael Olenick’s grim account of the impact of the automation of the early industrial era on workers’ lives as to his more sanguine posture for the future. One way to reconcile the two is that major shift in automation can have significant transition costs in terms of the loss and degradation of some jobs, even if overall the level and arguably the caliber of jobs overall rises.

Additional bits of information to flesh out Olenick’s account: in the early days of the Industrial Revolution (at least the first generation and arguably the first two generations) real incomes of average workers in England fell. And for the current wave of automation, some of the jobs displaced, such as that of receptionist, operator and checkout clerk, degrade the customer experience in addition to reducing staffing levels. And let us not forget that automation is also cutting into the ranks of entry level jobs like the law, where former yeoman tasks like research, which were important to learning the profession, are now being replace by computers or outsourced to India.

By Michael Olenick, a research fellow at INSEAD who writes regularly at Olen on Economics and Innowiki. Originally published at Innowiki

Right now, we have 122 major innovations that involve some type of automation. Click here to see the list. Putting it mildly, many of them were not met with enthusiasm. For example, Frenchman Barthélemy Thimonnier invented the sewing machine only to see his factory burnt down by worried tailors. The “American Manufacturing Method” using standardized parts was invented by Frenchman Honoré Le Blanc but post-revolutionary France had enough problems without alienating gunsmiths; Thomas Jefferson brought it to the US.

The first and most famous automation freakout involves the infamous Luddites.

Nobody is sure if the legendary Ned Ludd, the inspiration for the Luddites, is a real person or more of a Robin Hood legend. Ned was supposed to be a factory worker who smashed up a knitting machine in 1779.

In some versions of the story that the machine is the Stocking Frame mechanical knitter, invented by William Lee in 1589. It could’ve also been a Spinning Jenny invented by James Hargreaves in 1764. But my guess is that it was supposed to be the Spinning Mule, invented by Samuel Crompton in 1779.

Combined with improved efficiency of the other two machines, textile work transformed from largely skilled to largely unskilled labor.

The original Ludd story is unlikely. These machines weren’t like the latest mobile phone – the smallest were huge and made with lots of wood – not easily smashable even by the angriest Englishman. Plus, it’s unlikely Ned would’ve been near a Spinning Mule the year it was released.

Whoever Ludd was or wasn’t his Luddites were the real deal, smashing up Spinning Mules and other automation equipment, literally back in the day and more figuratively lately. 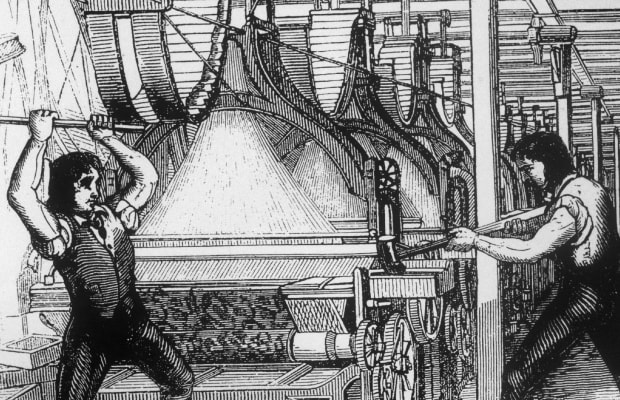 Luddites doing their thing…
The much-maligned Luddites had a point. Industrialist Richard Arkwright essentially weaponized the Mule and its predecessor equipment to control the lives of ordinary laborers.

Arkwright invented the modern factory. Through the use of automation equipment, he realized high-volume mills could be operated by women and children rather than skilled laborers. 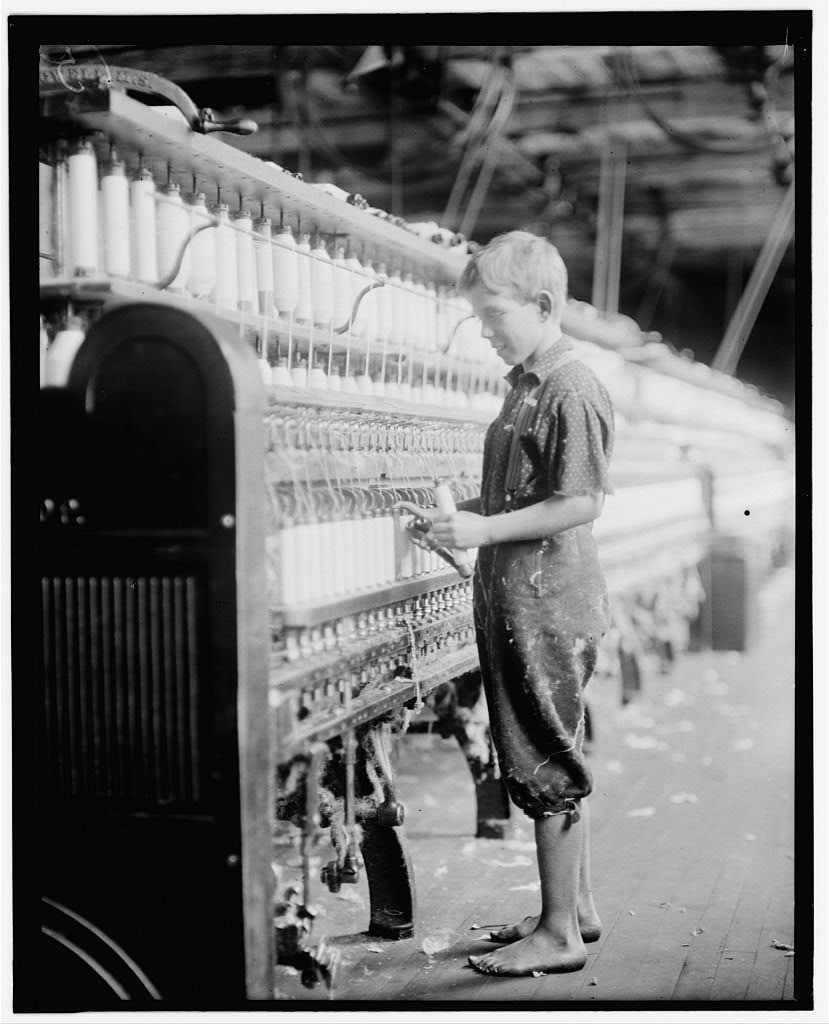 Typical child laborer at a fabric mill
Child labor was common in England at this time and Arkwright’s factories were no exception. Technically, his minimum age employee was six but exceptions were made. Kids were especially useful for dodging under powerful looms on an upstroke to retrieve something that fell behind, waiting behind on the downstroke, then bringing it back on the next upstroke.Mistakes were not uncommon:

Cotton factories are highly unfavourable, both to the health and morals of those employed in them. They are really nurseries of disease and vice… When I was a surgeon in the infirmary, accidents were very often admitted to the infirmary, through the children’s hands and arms having being caught in the machinery; in many instances the muscles, and the skin is stripped down to the bone, and in some instances a finger or two might be lost. Last summer I visited Lever Street School. The number of children at that time in the school, who were employed in factories, was 106. The number of children who had received injuries from the machinery amounted to very nearly one half. There were forty-seven injured in this way.

Ward was testifying due to a government investigation caused by widespread unease. On one hand, Luddites spent months “machine breaking” in 1811-1812. The British government responded by breaking Luddites, sending 14,000 troops against their own people.

It would be irresponsible to not mention Arkwright’s mills were fed by an increasing supply of cheap cotton produced by slaves in the early United States. In the mid-1700s, growing cotton even with slaves was often unprofitable. In 1793, Eli Whitney invented the cotton gin, automating the process of separating cotton from seed. The cotton gin vastly increased the profitability of slavery and resulted in a dramatic increase in slaves, including many kidnapped from Africa.

Returning to England, Arkwright’s mills expanded despite civil unrest. Waterwheels powered most mills which required they be located near fast-moving rivers. Arkwright hired local unskilled laborers, vacuuming the women and children of entire villages into his mills. The mills required ever more people so he encouraged families to move. He built the first company town, with homes, stores, and of course many mills.

Eventually, Samuel Slater smuggled Arkwright’s mill technology to the US. In 1834, the “mill girls” of Lowell, Massachusetts organized the first strike. Over the next century, countless women textile workers organized and protested. By 1912, 23,000 men, women and children organized the Bread & Roses Strike. 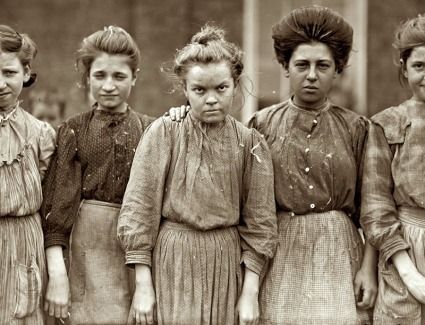 In 1933, Frances Perkins became the first woman in the Cabinet, as labor secretary. By then, atrocious labor conditions combined with the Great Depression caused the Textile Workers Strike of 1934, the longest in US history.

Over the years, automation ebbed and flowed but, for the most part, marched forward. We have countless innovations that contributed directly or indirectly to innovation. Despite understandable anxiety, automation tended to eventually lead to a net increase in jobs. Those automated mills the Luddites broke up led to cheap fabric and the garment industry. Clothing design, manufacturing, and retail are much larger industries. Plus, bespoke cloth and tailoring still exist.

Of course, a net increase doesn’t help the jobless with little or no skills.

Automation went on to destroy countless other jobs but, for the most part, they were awful jobs. Harvesting machines vastly decreased the number of people needed to pick corn and, later, tomatoes. Tomato pickers protested the invention of the tomato harvesting machine, predicting the end of manual labor. Of course, that didn’t happen and there were plenty of jobs picking other crops. The stepping switch and later computer tech largely eliminated the need for switchboard operators. While the job paid the bills (barely) it was boring work. Nobody knows what will happen as advances in artificial intelligence make things like self-driving cars a reality. Like the many other innovations here, there will no doubt be some amount of displacement. But will a substantive number of good-paying jobs disappear? Or will drivers find something similar but different which computers aren’t good at, while tireless robots pilot cars that rarely if ever cause accidents? Can’t radiologists find something more interesting to do than examine the same images repeatedly, with boredom often causing mistakes? Do pharmacists really need eight years of school when computers more accurately watch out for drug contradictions?

We can’t answer any of these questions except to say that, if history is a guide, all this tech will cause more jobs, not fewer, and those jobs will be more interesting.