Boris Johnson’s plan to meet his promise of getting Brexit done by October 31, had been going vastly better than it should have until his “Super Saturday” special Parliament session went pear shaped.

You also likely know that by virtue of that gambit, Johnson has sent in the required Benn Act letter asking for an extension to January 31…unsigned, and then a note saying this was Parliament’s letter, not his, and then his own letter saying why he thought the EU shouldn’t give the UK an extension.1

The press reporting has been less crisp than it should be on where the state of play is. We’ll unpack this further below, but if you have been following the UK, Irish, or business press, you will have seen that the Government intends to have the Meaningful Vote tomorrow, and it says it has the votes. In other words, it is acting as if the Letwin Amendment is not operative because the actual vote on the main motion didn’t take place.

There is a procedural interpretation that we’ll discuss that suggests that the Meaningful Vote did take place despite the lack of a formal division. And the desire to avoid a division may explain the bizarre spectacle of Jacob Rees-Mogg, the Government’s official point minister, walking out while the debate was still on.

Regardless, in the not-hugely-likely event that Speaker John Bercow rules in favor of the Government on whether it is putting the same question twice in the same session (which is verboten), Letwin or someone alert presumably would propose his amendment which would presumably pass again.

So one can assume the odds are decent that Johnson won’t be able to get his Withdrawal Act approved without getting the enabling legislation, particularly, the Withdrawal Act Bill, passed first. And that process opens a big can of worms.

In addition, timing issues on the EU side means that it now looks highly unlikely that Brexit would be completed by October 31.

Donald Tusk acknowledged receipt of Johnson’s extension request and said he’d confer with EU leaders and get back. Politico reports that EU diplomats were briefed and decided only to meet later in the week. The officials are apparently in no hurry. They will see how things unfold in Parliament before making their move.

Note that The Times, which has the worst record of all UK papers for reporting supposed scoops that were dead wrong, has said the Council is ready to approve the extension with a carve-out in case he gets his deal done by October 31; Politico more plausibly says EU officials are pondering what if any advantage they can get from this mess; Reuters re-reported The Times story but then undercut it:

EU diplomats and officials told Reuters on Sunday that, depending on the next developments in London, extension options range from just an additional month until the end of November to half a year or longer.

Looking at probability helps explain how the Government’s position changed with the success of the Letwin amendment on Saturday. Johnson and his allies thought that all they had to do was cinch the vote on the Withdrawal Agreement and they would be in the clear. But now, as we’ll explain, they have more steps to complete before they get back to a vote on the bill. More steps increase the odds of failure. If you have seven things that have to take place for a procedure to execute, and 90% odds of each completing, the probability of success is a mere 48%.

Johnson, with his gambler’s instinct, did get one thing right, even the results weren’t good for the UK generally (then again, Johnson only represents a bit over 100,000 Conservative Party members). His wager that he could get the EU to agree to a new deal before the EU summit worked out, but not because they capitulated to him but he capitulated to them.

Michel Barnier sensed Johnson’s desperate need for a deal, and succeeded in driving him to accept the “sea border” option in the crunch talks, a position the EU had advanced earlier but was rejected by Theresa May. One wonders how the wheels were greased so that the EU Council signed off on a deal that hasn’t gone through the usual process of being reviewed carefully by the sherpas prior to national leader sign-offy. Was it because they’d authorized the general outline of terms before? Or despite the notorious leakiness of the EU side, perhaps Barnier (or Tusk on behalf of Barnier) had been briefing the national leaders?

Here is why the odds of Johnson getting his Brexit over the line by October 31, and potentially at all, have fallen.

Window for October European Parliament approval about to close. We’ll discuss below in more detail why it looks highly unlikely that Johnson will get the Withdrawal Act voted on tomorrow. The short version is that lots of interests want to attach amendments to the now-prerequisite Withdrawal Act bill, and those have to be debated and voted on, and then the main bill too, before the main event of the Withdrawal Act gets considered. Even before getting to other potential complications, it’s hard to see how that could possibly all get done in a day, particularly with Speaker John Bercow so clearly enjoying putting the Government in its place.

Recall that the European Parliament is the next step in the approval process after the UK Parliament. Brexit coordinator Guy Verhofstadt tweeted that the EU Parliament will roll up its sleeves only after Parliament approves the Withdrawal Agreement:

I regret #Brexit, but if it’s to happen, this is a balanced agreement. Let’s see if mr. Johnson can find a majority in the House of Commons. If so, we will scrutinize the deal in the @Europarl_EN. The ball is in the camp of the members of parliament on both sides of the channel pic.twitter.com/FT0U69gYrA

Only after the European Parliament has signed off will the EU Council formally ratify the deal. And the European Parliament does so in a “plenary” session, meaning a full assembly. As There are plenary sessions are this week, specifically through Thursday, and the next plenary is not until November 13-14. Richard North explains that it is very unlikely that the European Parliament would even be able to call an emergency session, charitably assuming it though it important to indulge the timetable that most suited Boris Johnson’s political ambitions:

What they are not taking into account is that, the week after this week’s Strasbourg plenary (the last period in the run-up to the end of the month), is what we used to call a “white week”, where there were no activities scheduled (so the calendar was blank – i.e. white). It’s now become a politically correct turquoise.

Because of this, most of the 751 MEPs (plus many of their staff – bringing the total to about 2,000) will be at home (or in their constituencies or on various expeditions, which could be anywhere in the world). This would not be like recalling parliament in the UK. MEPs will be spread all over Europe and beyond. There will be flights and hotels to book – difficult at short notice. Many will have previous commitments and they can’t be forced to attend. There could be problems making up a quorum.

Recall that the Government would not only have to have completed the steps for the Withdrawal Agreement to be good to go, but it also has to get Royal Assent. This looks like an impossibly tall order to complete in time for the European Parliament to consider it this month.

Lewis Goodall of Sky News thinks the Government is in hot water. Mind you, reporters are only as good as their sources, but this sounds plausible:

Huge problems storing up for the govt this week:

Plan is to bring MV back tomorrow. Think almost certain not to happen as Speaker will rule out of order as (i) same issue twice (ii) contradicts Letwin amendment which says Brexit related legislation must be agreed first. 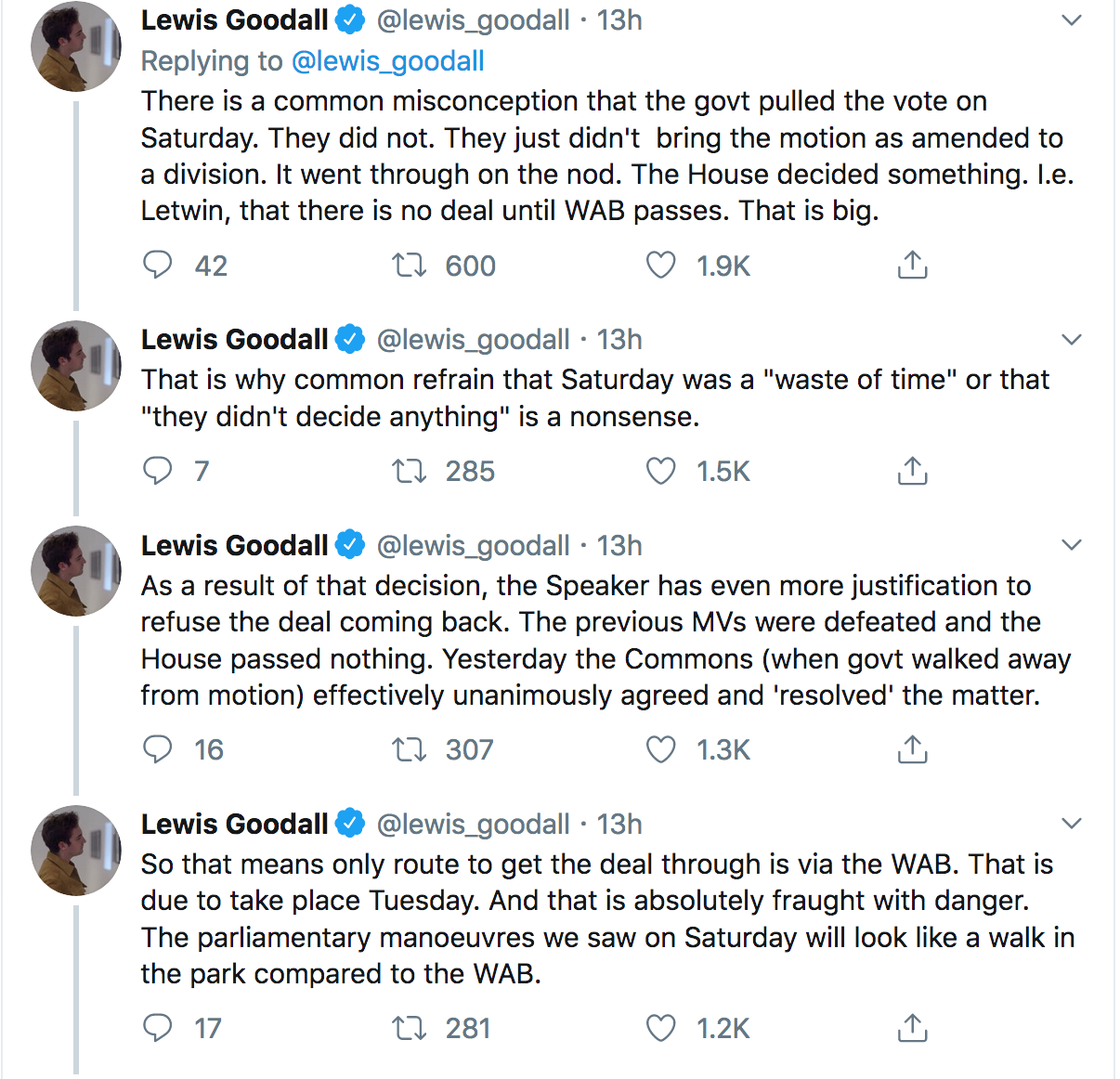 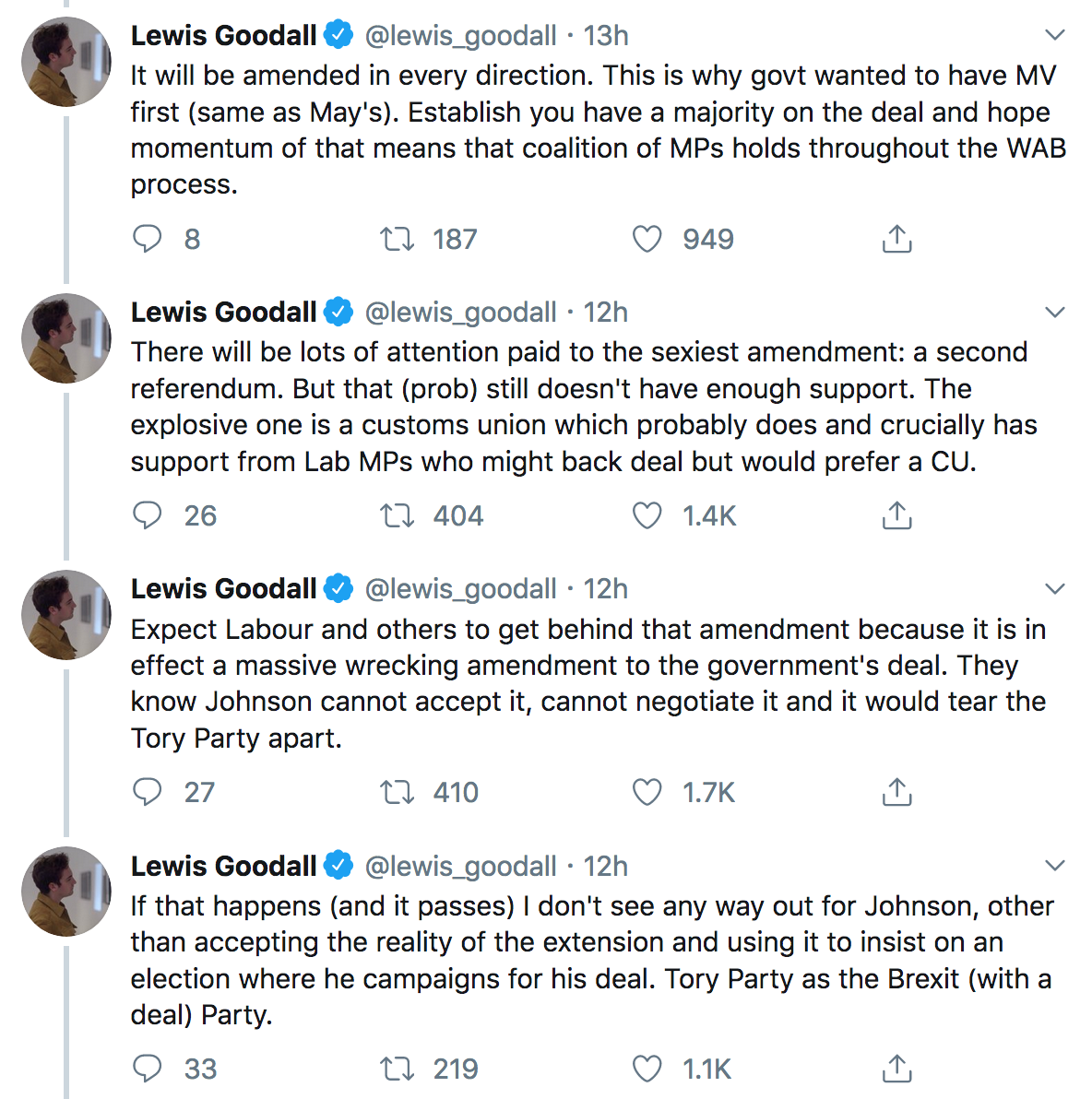 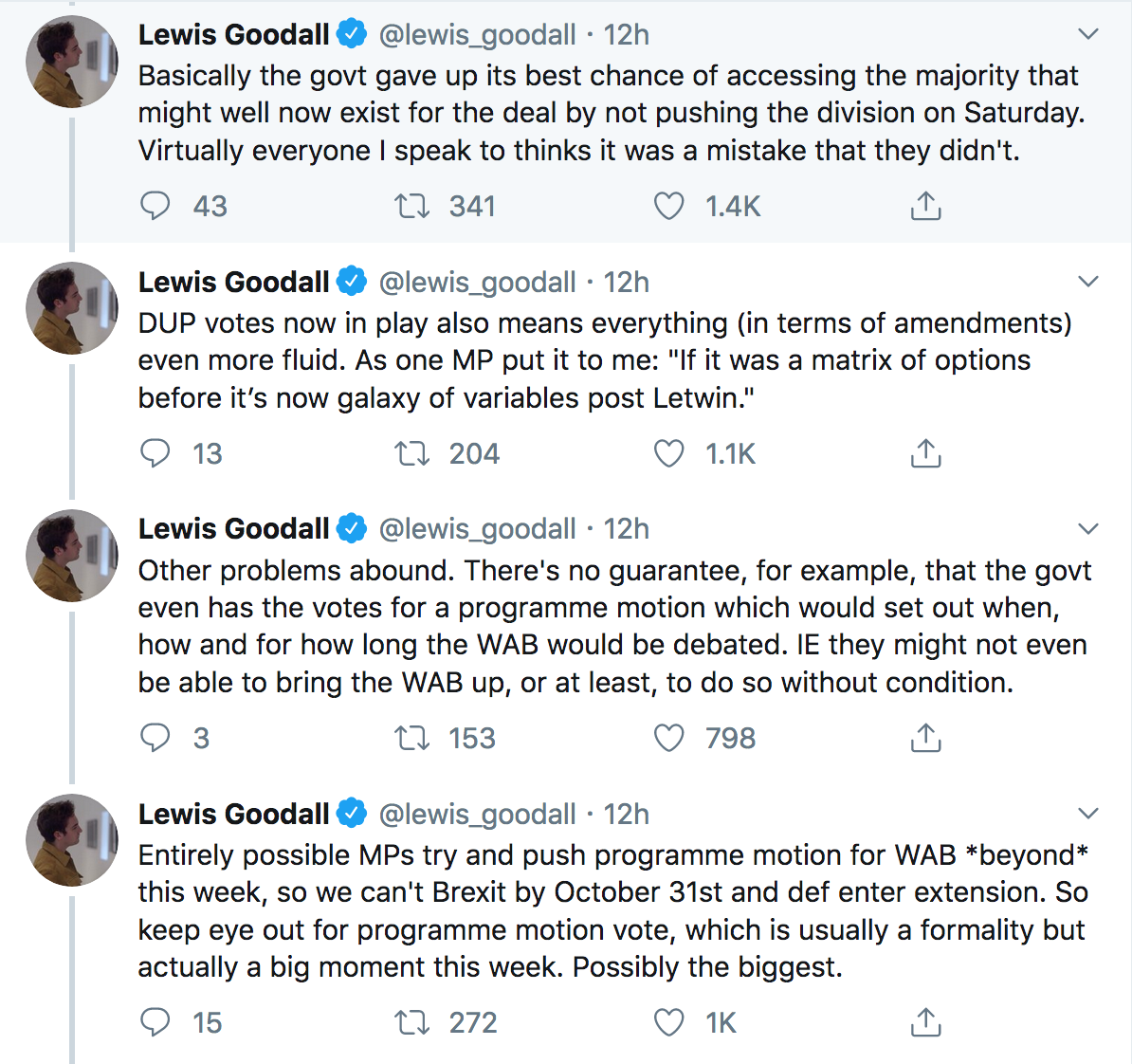 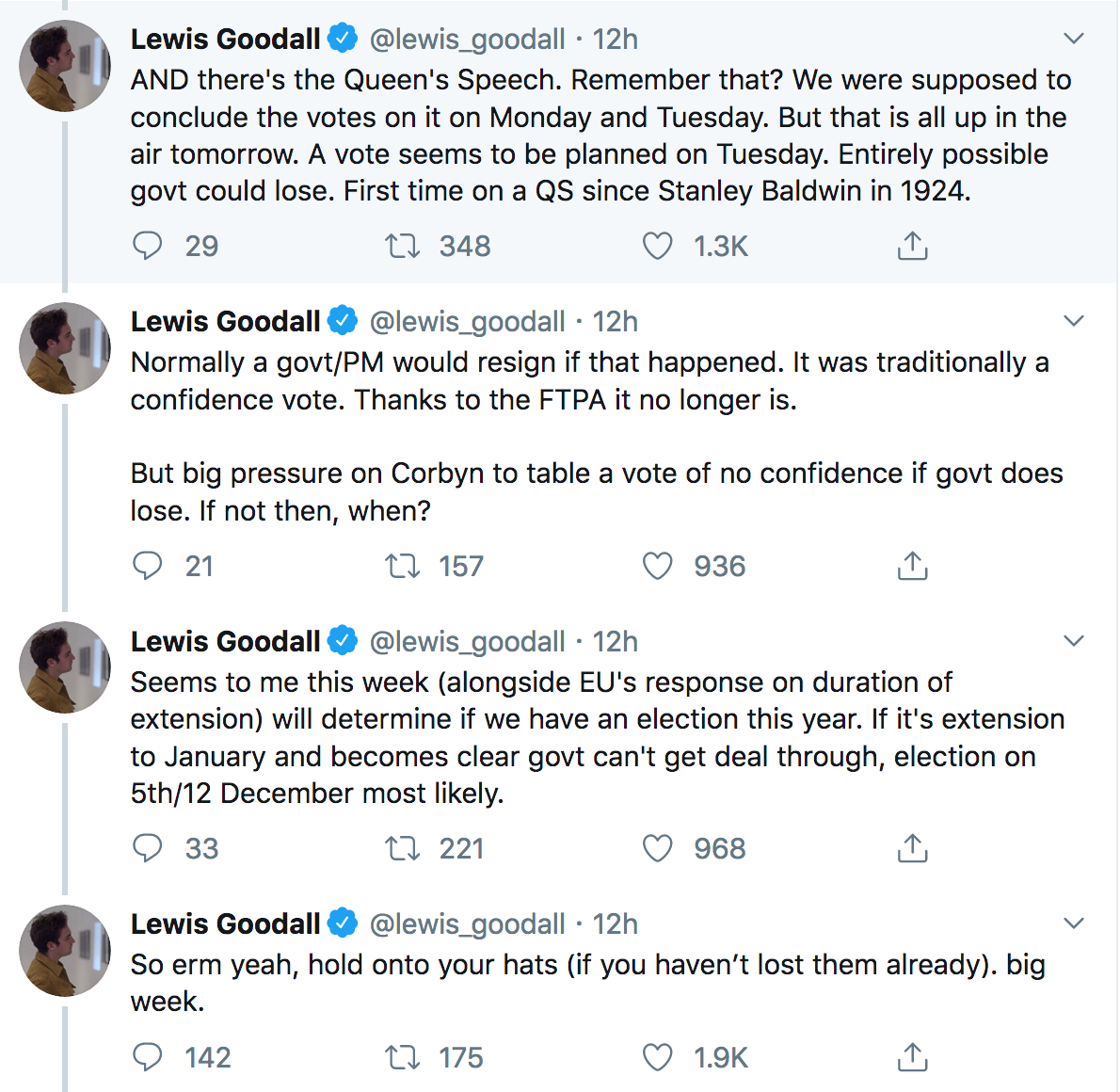 From the Parliament’s glossary Nodding through/On the nod:

Nodding through is when an MP is counted as having voted because, although they are present on the parliamentary estate, they are unable to pass through the division lobby because they are physically unwell or they have a small child with them.

Decisions made ‘on the nod’ are decisions made with no debate or division (vote). The Chair simply reads out the question to be decided and takes an oral vote. If there are no objections, the question is recorded as having been agreed to.

A decision taken on the nod is generally on a non-contentious question or one whose points of contention have been – or will be – addressed at another time.

The fine points of Parliamentary procedure are well above my pay grade. However, if all of Goodall’s sources say the Government blew it by not having a division on Saturday, it’s a viewpoint worth considering seriously.

Lastly, note Goodall’s point about the odds of a Labour amendment on a “customs union”. We’ve mentioned repeatedly how the press and MPs seem to have no idea of how a customs union differs from the Single Market. Too many of them have treated the term as if it has talismanic properties. Corbyn in particular has even written op eds with incoherent ideas about a customs union. And Barnier has occasionally used the term incorrectly too, helping to feed these misunderstandings. A customs union does not create frictionless trade.

But “customs union” in too many people’s minds seems to equate to a softer Brexit. And if the Labour MPs who would vote for Johnson’s deal would also vote for a customs union amendment as a way to make it better and have the opportunity to do so, then Goodall is right, it blows up Johnson’s deal.

So brace yourselves for a wild few days and maybe longer.

1 I’d predicted privately that Johnson would send in his own Benn Act letter undermining the official one, but was told that was too obviously failing to comply with the law……The Guardian quotes a former Cabinet member saying Johnson could be sued, particularly since the Government represented to the Court of Session that it would behave. But will anyone go to the trouble? The EU will give an extension if needed. So the point of a suit would just be to poke Johnson in the eye, as if he cared.