Lambert here: Of course, in this country we have private equity. So there’s that.

The expansion of organised crime generates losses in economic growth and social welfare. This column estimates the impact of mafia penetration in the legal economy in Italy, looking both at the micro-level effects on firms infiltrated by ‘ndrangheta members and at the more aggregate long-run effects on local economic growth. It finds that infiltrated firms are disproportionately in the utilities and financial services sectors and that infiltration has a strong negative effect on local long-term employment growth.

The proceeds generated by organised crime in illicit markets are estimated to amount to about 2% to 5% of global GDP (UNODC 2011). However, the presence and activities of criminal organisations are not limited to such markets but have progressively spread into legitimate businesses, where they benefit from a competitive advantage thanks to the availability of illegal capital and their coercive and corruptive power. The resulting market distortions can impose a loss on society as a whole in terms of long-run economic growth (Pinotti 2015, Acemoglu et al. 2019).

In a recent paper (Mirenda et al. 2019), we analyse the effects of mafia spread outside its areas of origin and into legitimate businesses. Specifically, we focus on the ‘ndrangheta, a major criminal organisation originating from the south of Italy, and analyse its penetration in the centre and north of Italy, areas with no tradition of mafia settlements.

Our choice of the ‘ndrangheta is supported by two core characteristics of this organisation: (i) its tight family structure, i.e. the fact that affiliation to clans is systematically determined on the basis of family ties with very rare cases of mobsters not belonging to the boss’s family; and (ii) its strong tendency to export its activities outside the territory of original settlement, i.e. the region of Calabria.

The Penetration of the ‘Ndrangheta in Northern Italy

Our analysis starts with the construction of a proxy indicator for ‘ndrangheta infiltrations into firms by combining the data on a firm’s governance structure with information recovered from investigative records. In particular, we identify all firms in which, in a given year, there is at least one owner or director who (i) carries a last name that is among those listed in a national anti-mafia commission report as belonging to ‘ndrangheta families active in the centre and north of Italy (Dalla Chiesa et al. 2014) and (ii) is born in the area of origin of the ‘ndrangheta. Whenever these two conditions are jointly met for at least one owner or director, we classify the firm as likely to be infiltrated (hereby ‘infiltrated’) from that given year onwards.

The resulting picture is one in which about 1% of the firms in the centre and north are classified as infiltrated, with yet significant heterogeneities both across geographical areas and across sectors of activity.

With respect to geographical areas, the highest concentration of infiltrated firms is found in the northwest of the country, areas in which, indeed, the presence of the ‘ndrangheta has been most documented (Transcrime 2015).

Most of the infiltrated firms operate in the construction sector (19%), followed by real estate (15%), and wholesale and retail trade (11%). Looking at the odds ratios, the infiltrated firms appear to be overrepresented in the sector of utilities (e.g. electricity, gas or water provision, and waste disposal) and financial services (e.g. money transfers). All these are either activities that rely more heavily on public demand (e.g. construction and utilities) or that are more suitable for money laundering (e.g. retail or financial services). The sectoral distribution we trace closely mirrors that of the firms that have been seized by the Italian judiciary from criminal organisations from the 1980s.

When considering the balance-sheet data of infiltrated firms in the years preceding the infiltration, we find that it was characterised by a progressive worsening of the firms’ financial conditions.

The Impact of Criminal Infiltrations on Firm Performance

In order to estimate the impact of mafia infiltrations on firms’ performance, we set up an event study type of analysis with year- and firm-fixed effects, to account for common shocks and structural differences across firms. We also include controls for the economic cycle at the sector and province levels to account for possible shocks that may be common to narrowly defined clusters of firms. 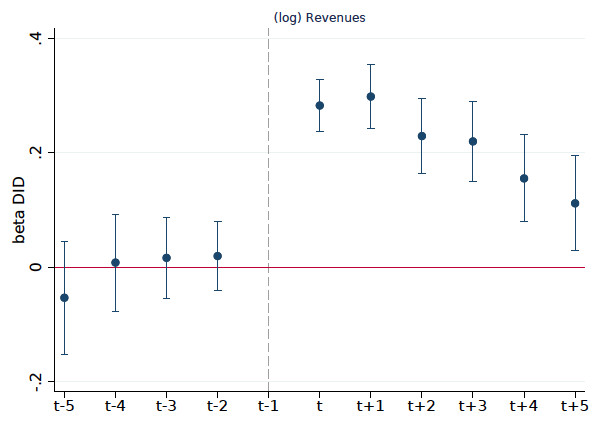 Notes: Each point is the estimate of the treatment effect on the log of revenues for different years, before and after the infiltration (leads and lags); vertical bands are the corresponding 95% confidence intervals; t-1 is the reference category.

When considering the production inputs, we find that infiltrations generate an increase in the labour inputs but not in capital investments. This pattern is particularly enhanced among firms that operate in activities most closely related to the public sector, such as education and training, health, public utilities, and the whole construction business (mining and quarrying, construction itself, and real estate activities). Among the other activities, the increase in the production inputs is significantly less pronounced, suggesting that the higher revenues reported may be an accounting artefact to mask money laundering rather than real growth.

The Long-Run Effects of Mafia Spread

We then adopt a long-run perspective to shed light on the effect that such criminal infiltrations may generate broadly on the local economy. We build on the fact that, at the beginning of the 1970s, the ‘ndrangheta was essentially absent in the centre and north of Italy, while it progressively infiltrated these areas in the following decades. Its current extent in the centre and north of Italy can thus be interpreted as the result of the progressive penetration that occurred over the past 40 years.

Using our proxy for ‘ndrangheta infiltrations, we trace the patterns of penetration of the criminal organisation in the centre and north and match information at the municipal level with local economic activity indicators built from census data.

We find a strong negative effect of the ‘ndrangheta on long-term employment growth: moving from a municipality at the bottom decile of the extent of ‘ndrangheta penetration to one at the top decile would lead to a decrease in employment growth of about 28% over a forty-year period. Such an effect is mostly driven by those sectors in which organised crime is likely to operate with the objective of making business, i.e. activities most closely related to the public sector.

A deeper understanding of where and how organised crime operates in the legal economy is crucial in the view of containing its spread and ensuring smooth functioning of market competition and economic growth in the long run. In particular, effective monitoring of firms’ governance and of public-private sector relations can be especially helpful to fight the expansion of criminal organisations.

Authors’ note: The views expressed here are those of the authors and do not necessarily reflect those of the Bank of Italy.

Notes and references available at original.