We’re a bit tardy in writing up former CalPERS board member JJ Jelincic’s protest against CalPERS and certain board members and employees for violating California laws prohibiting the use of government resources in political campaigns, as well as other abuses. We’ve embedded his letter at the end of this post.

His demand of re-doing the election might seem quixotic, given that he lost by a 34 percent to 66 percent. But before the combo plate of CalPERS’ dirty tricks and a monster influx of dark money, Jelincic had been the favorite. We have to believe that Jelincic isn’t motivated just by the prospect that he could overturn the election, but that he wants to expose the extensive abuses to prevent this sort of sleazy and illegal conduct to stop. And it isn’t just our opinion that this board election stank. From Tony Butka, former Presiding Conciliator
for the California State Mediation & Conciliation Service, at LA CityWatch:

This year we had an election for Retiree Member of the Board, and it was a pure binary choice between JJ Jelincic, who had basically been attacked into not running when his last term expired (mostly because he questioned Staff), versus Henry Jones, who’s claim to fame was twofold. One, he has never questioned anything staff does, and two, he was CFO over the wonderful LAUSD here in LA that brought us the Belmont School Debacle. Clear stakes.

Ultimately, JJ was taken out by the most brazen, slimy 1-2-3 hit campaign that I have ever witnessed. And that means something. In all the Union campaigns I have participated in over the years, some of which were really hard core, the Department of Labor would have stepped in and sent people to jail over the conduct of both the incumbents’ fake-money-laundered backers, and the illegal conduct of CalPERS staff (who have evidently been given “attaboys” instead of disciplinary investigations).

Jelincic’s protest below makes clear how extensive the misconduct was. Incumbent Henry Jones allowing CalPERS employees who’d never worked with Jelincic to electioneer against him during public comments. Their statements should have been cut off as unrelated to board business. Instead, not only were they allowed to carry on, but then board members, who always sit stony-faced during public comments, impermissibly piled on for 15 minutes. And when Jelincic’s supporters asked for equal time, they were denied.

In theory, only the extensive procedural abuses are at issue. But the large scale mail dumps and press hit pieces relied heavily upon impermissible acts by the allies of Jelincic’s opponent, incumbent Henry Jones. A barrier for Jelincic is that his election also featured a tidal wave of dark money, when there had never before been any dark money in CalPERS elections. However, it’s questionable whether much of that spending would have been useful had it not been dressed up as a letter from Treasurer Fiona Ma…leveraging an illegal letter by her. As we explained, including this high profile abuse:

On July 15, Treasurer Fiona Ma, who also sits on CalPERS’ board, wrote a letter on her official letterhead, with her seal of office, demanding that JJ Jelincic to abandon his board seat campaign.

Even if this had been strictly a private communication, it would constitute a criminal violation of Section 3204…

Ma got to double down via a large-scale mailer funded by the dark money group “Concerned Retirees for Pension and Health Care Security.” We’ll have more to say about that in a separate post.

You can see that the intent was to make the mailing look like an official state communication, with Ma’s name festooned on the envelope: 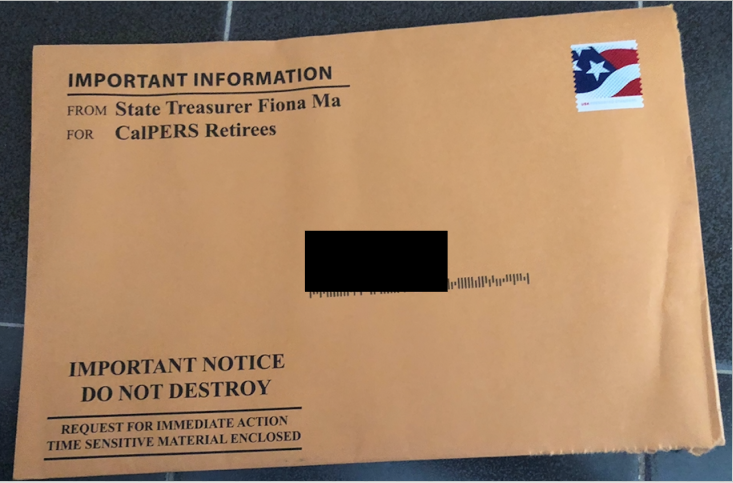 The first page identifies the astroturf group, which implausibly registered only on August 22, when it had to have funded this mailing easily a month before that, and subsequently misrepresents the State Personnel Board action: 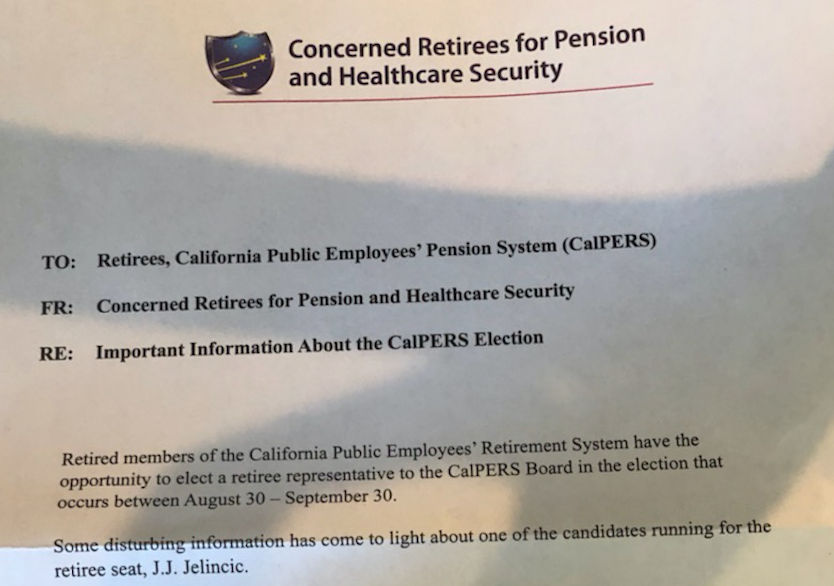 The July 15 letter comes next, where you can see the criminal abuse of Ma’s letterhead:

Ma has now tried implausibly to deny that she had any knowledge of this mailer. Recipients who complained to Ma’s office were first ignored, but as the numbers grew, they received messages similar to the one sent by her communications director Mark DeSio sent to me yesterday:

I read your story in Naked Capitalism.
Here is a statement that we have been issuing from our office to the public ever since learning about the mailer:

“The packaged mail that you received that includes a letter from Treasurer Fiona Ma regarding CalPERS was not originated from Treasurer Ma or the State Treasurer’s Office. Tax dollars were not used to circulate the package. Treasurer Ma and the State Treasurer’s Office did not authorize the sender of this package to circulate it and we are unaware of how they received your address to send this to you. If you wish to file a complaint please contact the Fair Political Practices Commission at (916)322-5660.”

If you think anyone who wanted to have a political future in California would cross the state’s second highest officer by sending out a mass mailing without her knowledge, I have a bridge I’d like to sell you.

Jelincic also points out how see-through ballot envelopes which violate the California constitutional requirement, “Voting shall be secret,” would allow votes to be cherry-picked. Again from a September post:

Below are images of a completed and sealed ballot for the current election, taken at a Starbucks in indoor lighting. Even in a not-very-close up shot, if you look at the area below the return address immediately under the zip code, you can easily see the filled-in bubble for the second of two choices, which is for JJ Jelincic. 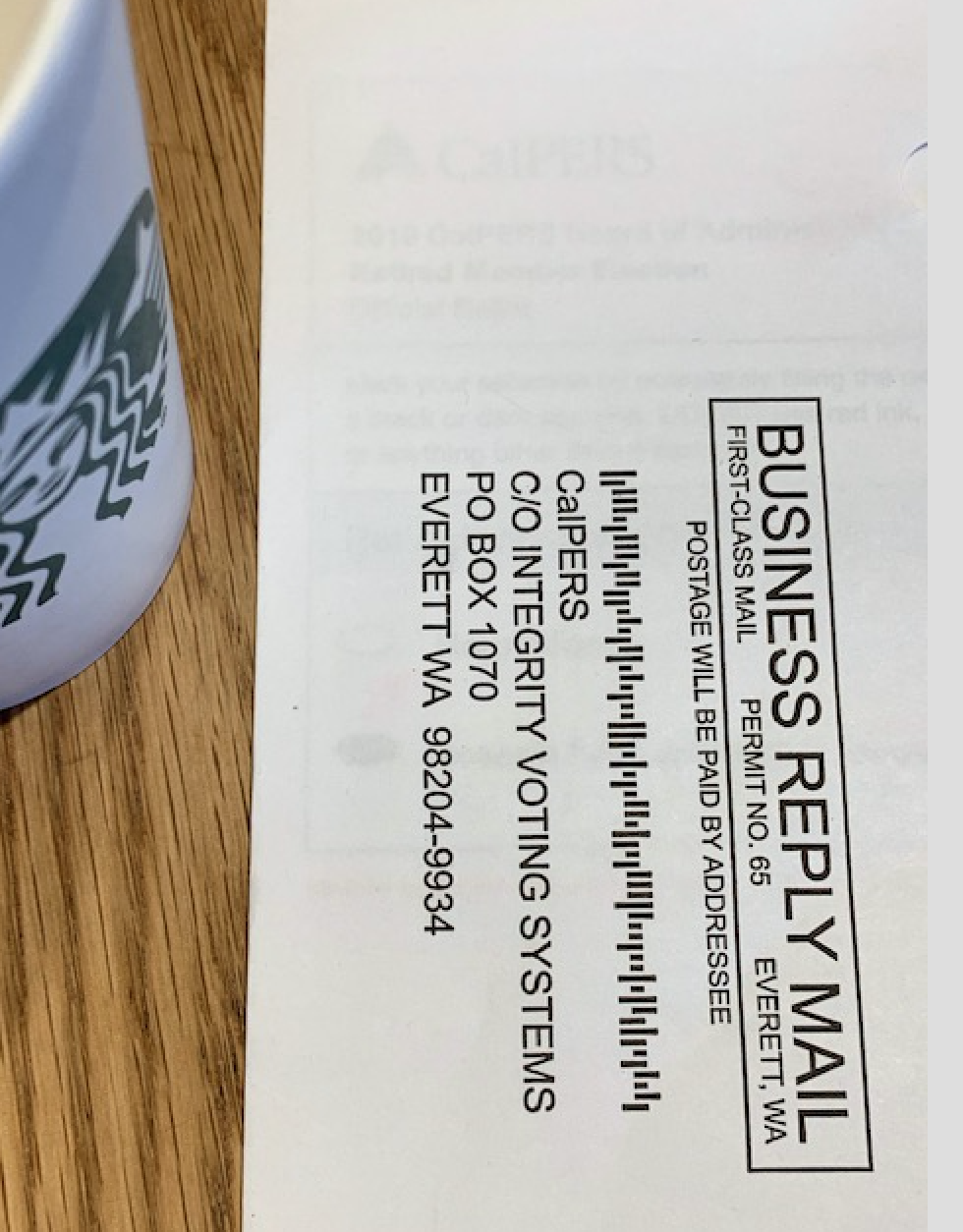 This image shows the ballot envelope held up to light. See how you can read all the words inside, and most important, the candidates’ names and the voter selection! 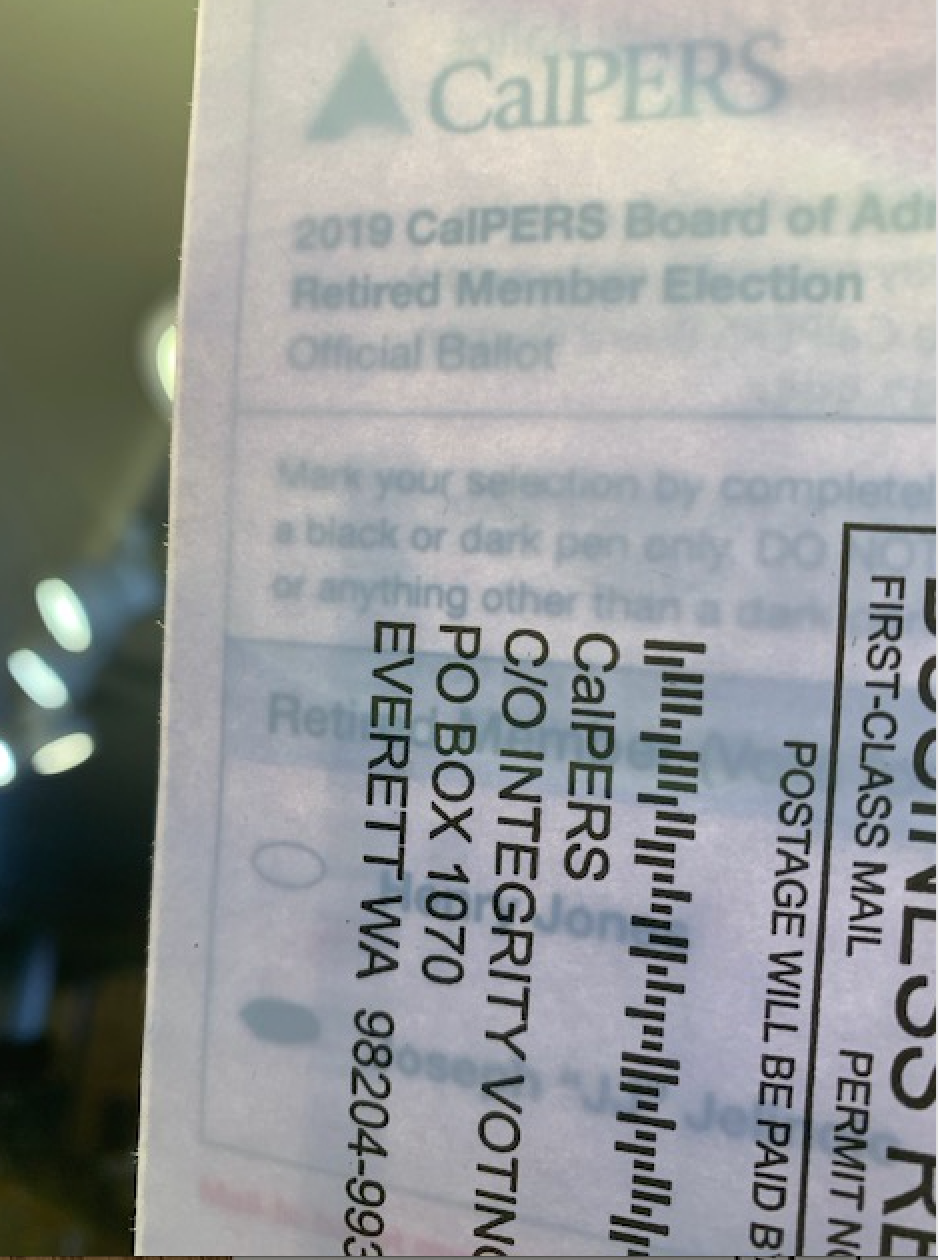 Note that if the ballot is put in the envelope with the text and voter selection facing the flap side rather than the address side, they are not quite as easy to read but still visible without holding the envelope up to a light.

Jelincic also objects to the use of electronic voting, which is not allowed under the California election code. Jelincic is challenging CalPERS’ long-standing and untested claim that it is not subject to these California statutes, only the Public Employees Retirement Law. Yet CalPERS is required to comply with numerous other California laws, such as the Bagley-Keene Open Meeting Act, the Public Records Act, employment, and criminal law.

Our understanding is that this is the first time an election has been protested, as opposed to merely demanding a recount. Unfortunately, Jelincic’s protest will be arbitrated by the Office of Administrative Hearings rather than adjudicated. CalPERS, Jones, and Jelincic are to agree on the panel of “independent” arbitrators. Each side can call witnesses during their hearing, but it does not appear that Jelincic can depose witnesses or subpoena documents. The panel provides its ruling within 30 days of the hearing.

I hope this hearing enables the legislature and CalPERS beneficiaries to see how scummy this election was, as well as demonstrating that the Sacramento Bee was acting as a CalPERS mouthpiece rather than a news organization. It would be even better if the panel deemed the CalPERS practices at issue to be illegal. We’ll keep you posted.