You thought deaths of despair were an affliction of deplorables. Silly you. In case you weren’t paying attention, young people are under a lot of stress too and many don’t have reason to think their state will get much better. Short job tenures and the rise of McJobs mean not just uncertain incomes, which are bad enough, but weak social attachments due to shallow relationships with co-workers and often too little discretionary income to mix regularly with contemporaries. Student debt is another major source of anxiety. We’ve also written, virtually from the inception of this site, that high levels of income inequality are bad for health, even for the wealthy.

And the reality of the accelerating effects of global warming weighs more on the young than the old, who can hope to die before serious dislocations kick in. The Jackpot is indeed coming.

Psychological, income, and time stress have knock-on health effects, including depression, poor coping mechanisms (alcohol and substance abuse; overeating), lack of time and/or money to take care of oneself well (good diet and exercise, as well as stress reducers like vacations and spending time with friends). And no or crappy health insurance means a lot of people who would benefit from health treatment or therapy won’t get it or won’t get enough. Look at the stories of deaths from inability to afford insulin.

So the results of a Blue Cross Blue Shield study which we have embedded at the end of this post, that Millennials are on track to have worse health outcomes than their GenX predecessors, should not come as any surprise, save perhaps for the degree of decay. However, the document perversely tries to make a case that the health of Millennials generally is deteriorating, when the data clearly shows that the rise in mortality is due to accidents, meaning significantly overdoses, and suicides. And the other information they muster on the health of Millennials generally does not provide much support for the notion of worsening physical health, but of worsening mental health.

My assumption is BCBS spent a lot of effort mining health data, and the authors were tasked to write about that because that’s where the work went, as opposed to where the findings were. In fairness, the study also estimated what higher health care costs would mean to Millennials’ budgets.

1. Millennials are seeing their health decline faster than the previous generation as they age. This extends to both physical health conditions, such as hypertension and high cholesterol, and behavioral health conditions, such as major depression and hyperactivity. Without intervention, millennials could feasibly see mortality rates climb more than 40% compared to Gen-Xers at the same age.

2. These accelerated declines will result in greater demand for treatment and higher healthcare costs in the years ahead. Under the most adverse scenario, millennial treatment costs are projected to be as much as 33% higher than Gen-Xers experienced at a comparable age.

3. Poorer health among millennials will keep them from contributing as much to the economy as they otherwise would, manifesting itself through higher unemployment and slower income growth. Under the most adverse set of projections, lower levels of health alone could cost millennials more than $4,500 per year in real per- capita incomes compared to similarly aged Gen-Xers. Such impacts would be most likely concentrated in areas already struggling economically, potentially exacerbating instances of income inequality and contributing to a vicious cycle of even greater prevalence of behavioral health conditions.

First, the mortality stats. You can see the overall rise, as well as the shifts. Deaths from cancers and heart disease are down among Millennials (the latter is interesting in the face of rising obesity), but notice the big rises in accidents and suicides. “Accidents” presumably include drug overdoses.

The article claims that focusing on mortality distorts the overall health picture; I’m not sure I buy this view given that some of the proxies they use to assess health are questionable. Some of this is “drunk under the streetlight”: BCBS is relying on data they can analyze across large populations, when some measures they can’t capture or haven’t computed (like BMI) could be more revealing. Nevertheless, the study depicts the base case as Millennial mortality continuing to rise and then leveling off. And another problem is that young people, particularly young men, tend not to go for annual checkups for cost reasons. That’s not even a bad thing; the annual checkup has been found to be of little value in improving health, so it isn’t at all clear how representative the sample for this analysis was. Healthy people are better off saving their money to see the doctor when they think something is amiss, and then tests would be directed at assessing the compliant, as opposed to an overall health review.

More and more studies have debunked the idea that high LDL cholesterol causes heart disease, so it’s troubling to see this report depict high cholesterol as a health risk (in fact, for women, the total cholesterol level correlated with the lowest level of all factor mortality is 270). I thus tend to discount the “health index” due to the inclusion and significance of high cholesterol, as well as potential sampling issues.

I also found this table a bit puzzling, since the base case for Millennials versus GenX is not that different (and indeed shows some improvements, such as for tobacco abuse) save for major depression. But the “adverse case” give cause for pause:

However, this chart is telling, since one would assume BCBS would have good data on behavioral/health conditions (its data would be based on patients getting treatments):1 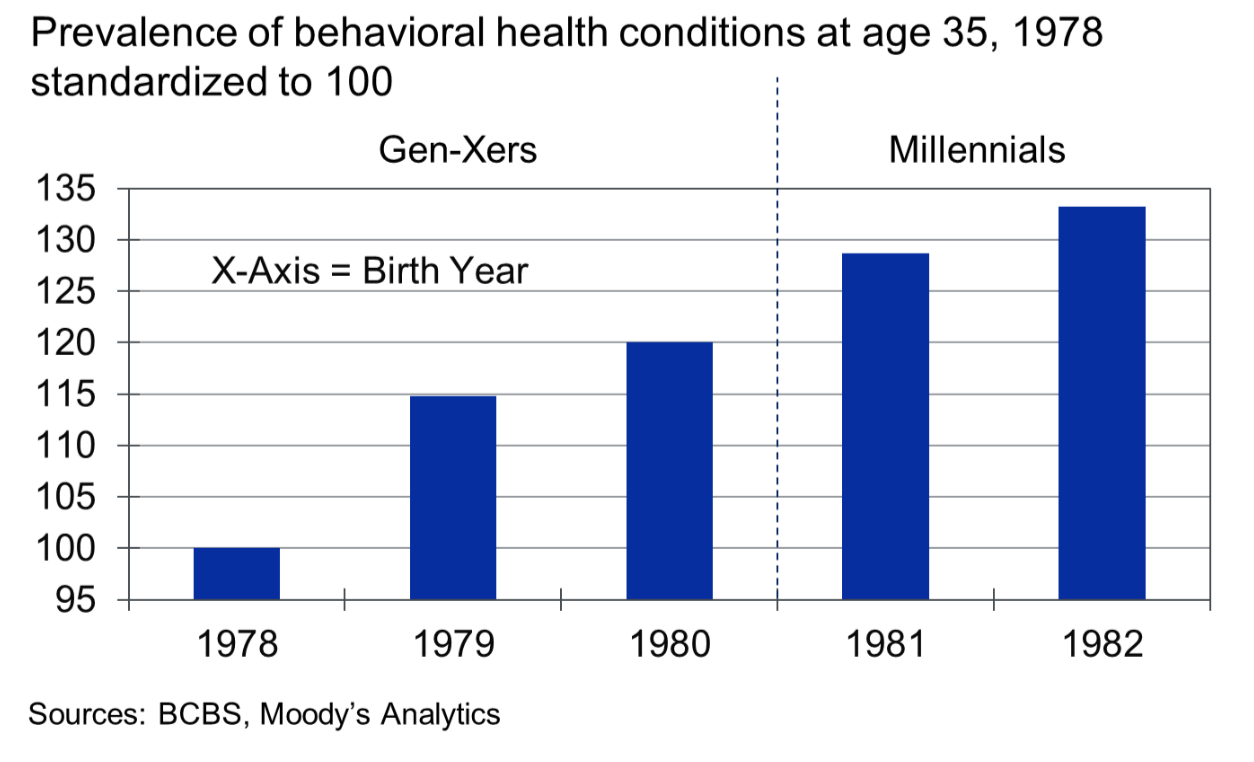 Needless to say, this study raises important questions, particularly in flagging the big increase in deaths of despair among the young. I hope it will lead to more examination of the health as well as the social issues. At a minimum, it bolsters the case for single payer so that more can get treated for mental health issues.
____

1 Even being treated isn’t a fully accurate guide. It has become more and more common to use psychoactive drugs, particularly Adderall, to enhance test and workplace performance. And I have to tell you, in NYC and I assume other major cities, doctors are shockingly willing to offer stimulants and anti-depressants for omplaints like fatigue with no psychological or psychiatric evaluation. So one has to wonder whether at least some of “hyperactivity” incidents are to help with job demands. It’s still not good, but leads to a different line of thought as to the remedies are (public policy measures, like better worker protections, as opposed to strictly medical).