Lambert: I like the approach of calculating value-add from tear-downs. Nothing on software, though.

By Yuqing Xing, Professor of Economics at the National Graduate Institute for Policy Studies, Tokyo. Originally published at VoxEU.

In order to pursue ‘fair trade’, the Trump administration has imposed a punitive 25% tariff on $250 billion’s worth of Chinese goods. However, conventional trade statistics greatly exaggerate the US trade deficit with China. This column uses the iPhone as an example to demonstrate how the trade deficit is inflated and why value-added should be used to assess the bilateral trade balance. If multinational enterprises, including Apple, shift part of their value chains out of China, China may no longer play a central role in global value chains targeting the US market. Depreciation of the yuan will be insufficient to counter the effect.

In 2018, the US trade deficit with China in goods surged to $420 billion. The huge trade deficit triggered the on-going US-China trade war. In order to pursue so-called fair trade, the Trump administration has imposed a punitive 25% tariff on $250 billion’s worth of Chinese goods. Since the start of the trade war, the Chinese yuan has been depreciating against the US dollar. Alleging that the Chinese government used depreciation as a trade-war weapon, the Trump administration has designated China a ‘currency manipulator’.

There has been a consensus among economists that conventional trade statistics greatly exaggerate the US trade deficit with China (Johnson and Noguera 2012, OECD and WTO 2013, Koopman, Wang and Wei 2014). Xing and Detert (2010) use the iPhone 3G as a case and explain how the US trade deficit with China was inflated and why value-added should be used to assess the bilateral trade balance.

Since the 2007 release of the first-generation iPhone, China has been the exclusive base for iPhone assembly. With the launch of the iPhone X, the iPhone has evolved into a luxury high-tech gadget. In this column, I use the iPhone X as a case to discuss three questions. (1) Have the Chinese firms involved in the iPhone production moved up in the value-chain ladder? (2) Does the iPhone remain a significant source of the trade imbalance between the US and China? (3) Could the yuan depreciation hedge the risk of Trump’s tariffs?

Moving up the iPhone Value Chain

For instance, Sunwada, a leading Chinese battery maker, supplies the battery pack of the iPhone X, and Chinese company Dongshan Precision supplies the printed circuit boards for the iPhone X through its acquired American company M-Flex. The involvement of those Chinese firms, though restricted to non-core technology segments of the iPhone X value chain, indicates that the Chinese mobile phone industry as a whole has moved to an upper rung in the iPhone value-chain ladder. 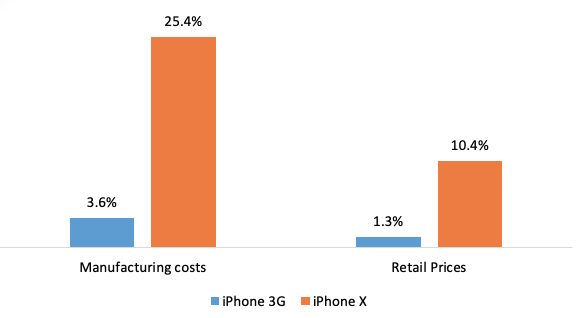 To date, trade statistics are still compiled using the gross value of exports, implicitly assuming that all gross value is generated by the exporting nation. According to that principle, whenever China ships one iPhone X to the US, the current system of trade statistics calculates it as a $409.25 export to the US.

The teardown data reveals that the total value of the parts imported from the US for assembly of the iPhone X is $76.5. Hence, importing one iPhone X from China generates a $332.75 ($409.25–$76.5) trade deficit for the US. That is the conventional approach to calculating bilateral trade balances.

However, Korea, Japan, and other countries are also involved in the production of the iPhone X and supply more than 45% of the parts and components. In other words, the $332.75 consists of not only value-added originating in China but also that contributed by Korea, Japan, and other non-US countries. It should be considered as a trade deficit between the US and all other countries involved in manufacturing the iPhone X, not just China.

The iPhone case unambiguously demonstrates that conventional trade statistics significantly inflate China’s trade imbalance with the US. The iPhone, a product of an iconic American company Apple, remains a significant source of the Sino-US trade imbalance. Reducing the US trade deficit with China requires not only fair trade but, more importantly, unbiased trade statistics consistent with value chain trade.

When the Chinese yuan depreciates against the US dollar, only the $104 Chinese value-added of the iPhone X will be affected. The rest of the iPhone X’s production cost—$305.25, the sum of all parts and components imported for assembling the iPhone X—will remain constant and not be affected whatsoever.

However, if President Trump decides to levy a 25% tariff on the iPhone X, the tax base will be $409.25, i.e. the sum of both Chinese and foreign value-added. To offset the tariff burden due to the foreign value-added, the yuan should depreciate much more than 25%.

The level of yuan depreciation needed to completely offset the negative impact of a tariff can be calculated for any given foreign value-added. Figure 3 reports the computation results for two tariffs: 10% and 25%, where the horizontal axis denotes the percentage of foreign value-added embedded in Chinese exports.

On average, foreign value-added accounts for 33.9% of Chinese exports to the US. This implies that a 43.4% depreciation of the yuan is required to completely cancel the negative impact of a 25% punitive tariff on all Chinese exports to the US, while an unthinkable 400% depreciation of the yuan is necessary to eliminate the negative impact of the same tariff levied on the iPhone X. The depreciation rates required to compensate for a 25% tariff are generally too high to be realised. It is ‘mission impossible’ to use yuan depreciation to hedge the risk of Trump’s tariffs.

Since conventional approaches cannot eliminate tariff burdens, for multinational enterprises using China to assemble products catering to the US market, one feasible option is to shift part of their value chains out of China. Apple has asked its major suppliers to evaluate the cost implications of shifting 15-30% of their production capacity from China to Southeast Asia (Li and Cheng 2019).

References are available at the original.