A Hong Kong court has declared the government’s anti-mask law unconstitutional.
High Court judges on Monday found the mask ban introduced under emergency legislation was “incompatible with the Basic Law”, the city’s mini-constitution.

Justices Anderson Chow Ka-ming and Godfrey Lam Wan-ho ruled in favour of the 25 pan-democrats who challenged two laws that brought the ban into effect on October 5.

The high-profile constitutional challenge centred on the colonial-era Emergency Regulations Ordinance and its derivative, the Prohibition On Face Covering Regulation, introduced by the government on the grounds of “public danger” in a bid to quell the wave of protests sparked by the now-withdrawn extradition bill.

The controversial move sparked six constitutional challenges, including the present two, testing the ordinance in the courts for the first time since it was enacted in 1922.

In a 106-page judgment handed down on Monday afternoon, the judges declared the ordinance “incompatible with the Basic Law” to the extent that it empowers the chief executive to make regulations on any occasion of public danger.

They also found the measure that gave police the power to require a person to remove his or her mask at public places a disproportionate measure given its “remarkable width”.

“There is practically no limit on the circumstances in which the power under that section can be exercised by a police officer,” the judges wrote.

But they left open the question of whether the ordinance is constitutional when used in times of emergency.

The judges will hear further submissions on Wednesday morning to decide the appropriate relief and costs for the legal challenge.

By Aidan McGarry, Reader in International Politics at Institute for Diplomacy and International Governance, Loughborough University. Originally published at The Conversation

From Hong Kong to Chile and from Lebanon to Iraq, people around the world are taking to the streets in protest against their leaders. Across these myriad different protest movements – with their different contexts, histories and goals – people are wearing the same masks. The grinning faces of Guy Fawkes from the film V for Vendetta and of the Joker have become ubiquitous. But why?

A mask is a form of self-presentation, it is the face we choose to show to others. Masks have been used by humans for millennia for a variety of purposes from rituals to theatrical performances in order to entertain, to protect and to disguise.

Protesters have long used masks, from demonstrations against the invasion of Iraq to protests against the World Trade Organisation summits in the 1990s. They have a communicative and performative power to help protesters make demands, raise awareness and offer a degree of protection.

A mask is useful in authoritarian regimes, providing a degree of anonymity for those taking to the streets. Authorities in Hong Kong banned the use of masks in early October, arguing that they nullify the facial recognition technology used to identify and prosecute protesters. This led protesters to engage in creative ways to subvert the law including using hair to disguise their faces.

But as well as giving people anonymity, masks have a transformative quality for the person wearing them. They afford people the opportunity to be braver, stronger and less acquiescent in the face of political power. When worn by protesters, masks can encourage people to do something extraordinary, to take to the streets in order to challenge those in power, to render themselves visible and vulnerable alongside others doing the same.

When we wear a mask we become someone else – and so they help to protect and embolden the individual. But behind the mask are faces and bodies, made of flesh – and acutely vulnerable. In recent weeks, people have been shot in Chile, Iraq and Hong Kong. A mask offers little meaningful protection against state violence.

Part of the appeal of masks to protesters is that they are relatively easy to make. the Joker mask requires a few simple colours, five minutes of face painting, and a relatively steady hand. Protest movements over the past ten years, from Sao Paolo to Madrid, have possessed a creative and handmade quality as protesters seek to showcase their authenticity. This handmade quality demonstrates that movements are from the grassroots and a reaction against the political elite who occupy grandiose buildings in the capital.

The Guy Fawkes mask popularised by the hacker collective Anonymous and the Occupy movements has become synonymous with 21st-century protest. Anytime a protest springs up, there is someone selling mass-produced versions of these masks, paradoxically undermining the critique of neoliberal capitalism articulated by both Anonymous and Occupy. The mask has become an anti-establishment trope wielded by ordinary people to register their dissatisfaction with the ideas and policies of the political elite.

Ultimately, protests are struggles to be seen and heard. The use of cultural artefacts and symbols such as the distinctive red and white hood and cloak from Margaret Atwood’s The Handmaid’s Tale help people to speak up and speak out. Masks are also a way to foster identity with others and communicate strength against a defined foe.

My own ongoing research has focused on the aesthetics of protest: elements such as masks, use of colour, art, symbols, slogans, clothes, graffiti and objects that comprise a material and performative quality which is often captured in photos and videos and shared across media platforms. The mainstream media tends to focus on dramatic and carnivalesque imagery, knowing this generates attention. Protesters play along, understanding that this attention is important if the mobilisation is not to fizzle out. Masks help with this media exposure, ensuring that the ideas of the protesters are sustained a while longer.

Masks also help protesters to show solidarity with one another, and the mask becomes a common language to register dissent. Even though protesters in Chile, Iraq and Lebanon have very different objectives, be that fighting corruption or challenging unjust policies, they have painted their faces like the Joker for the same purpose: to show that those who are abused, oppressed and ignored are no longer passively accepting their lot. 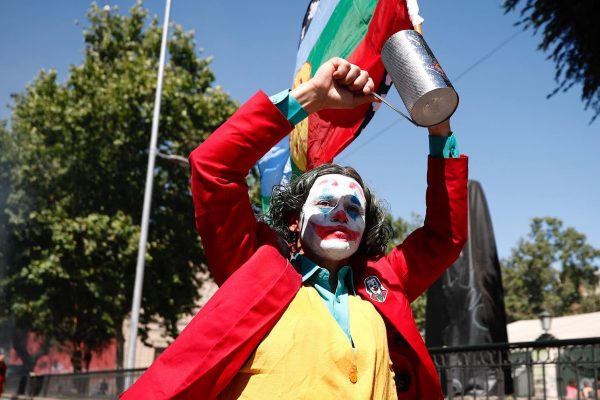 A protester in Chile dressed as The Joker on October 30. Alberto Valdes/EPA

Due to the film’s global release and the narrative arc of its main character Arthur Fleck, the Joker mask has rapidly emerged as a symbol of the subaltern being empowered, of somebody from the “lower” ranks rising up. The garish face paint cuts across linguistic frontiers, cultural backgrounds and state boundaries. It has become a symbol of unity, where people come together, for a time suspending their differences and societal cleavages to make themselves seen and heard together.

Masks such as this speaks on behalf of the protester, while anchoring each person in a wider struggle. Protesters use such masks as a way to build a counter culture, express unity, claim visibility and to challenge those in power. As such, these masks have become a mainstream vehicle with which to communicate subversion.