Yves here. One of the things I can’t prove but know to be true is the great expansion in the number of MBA programs seen as having significant credentialing value has been to the great detriment of the US. When I was a kid, MBAs for the most part sought jobs in Wall Street, consulting, and big business. Over time, as more and more graduated, they increasingly colonized higher education, the health care industry, and not-for-profits. Roy Poses has been writing for years about their malign influence on health care.

Mind you, it isn’t merely that they have too little understanding of or interest in the business of the business. It’s that they also add a hugely costly administrative layer that focuses above all on increasing tis power and pay.

As we wrote in 2006… in 1988, Alain Enthoven, an original member and driving force of the Jackson Hole group, published a short manifesto about “managed competition.” (Entoven AC. Theory and Practice of Managed Competition in Health Care Finance. Amsterdam: North Holland, 1988.) This is now not easy to find (but see Amazon here).

In this volume, Enthoven expounded on his scheme to wrest power over health care from physicians and give it to managers and bureaucrats. Enthoven thought of physicians as part of a tightly organized “guild,” that is, an economic alliance. His model for this was a pre-World War II document from a French medical society. Basically, he thought such guilds, which he believed to be in place in all Western democracies except in the UK and Scandinavia, were based on principles that were “not the natural expression of a free market in health care,” (p.33) and furthermore, that the guild model associated with health insurance “makes it very difficult for government or private payors to control cost growth,” (p.41) while they paradoxically “can also produce poor service (p. 42). To combat physicians’ overwhelming economic power, Enthoven called for managers to use “tools they have found to counteract market failure.” (p. 98) Finally, he suggested using a coordinated strategy to “break up the guild,” noting that “overcoming the guild has not been easy in the United States…. However, the guild has broken down.” (P. 122)

How much the guild has broken down, leaving health care leadership in the hands of managers, was illustrated by a recent research letter in the Mayo Clinic Proceedings (Logeman AL et al. Who Influences Health Care in the United States? A Study of Trends From 2002 to 2018. Mayo Clin Proc 2019; 94: 2360-1. Link here.)

Managers are Now the Most Influential People in Health Care

The authors studied the list of the 100 Most Influential People in Healthcare published by Modern Healthcare yearly since 2003. (The 2018 version is here.)   They stated that:

Because it receives wide reporting and limited critique, this list stands as a useful longitudinal account of who others perceive to be in a position to influence health care.

Using the published yearly list and the reported characteristics of the persons listed, we sought to determine the relative ranking over time, covering the period 2002 to 2018, of executives and administrators, academics and frontline advocates, and government officials. To achieve this, we determined the influencer’s sex and role (executive, member, independent, or other) as well as the sector from which each individual exerted their influence grouped into industry (nonprofit, for profit, payers, products, and providers), academia/advocacy, and government.

The results showed a striking trend over time.

There were 1700 persons named from 2002 to 2018, a minority of them women (range over the period, 17% to 28%). Most influencers are top executives from nonprofit health care provider organizations; their proportion has increased from 23% in 2002 to 72% in 2018, with an apparent substantial upward inflection in this trend since 2009 (Figure). This predominance appears to be at the expense of academics, advocates, and government officials. 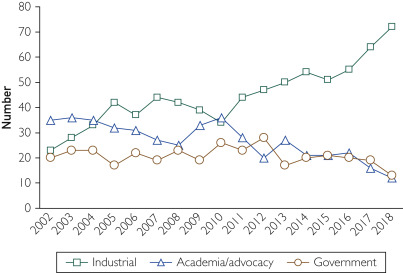 A news article that featured an interview with Dr Victor Montori, the senior author of the article, noted in fact that the most recent (2018) list included quite a few CEOs of large for-profit health care corporations.

Among those topping the latest installment of the influential Modern Healthcare power index are the corporate heads of Amazon, Apple, Aetna, Humana, CVS and Minnetonka, Minn.-based United Health/Optum.

The authors concluded that

perceived influence over US health care of chief executives of health systems is increasing. To the extent that the ranking validly reflects influence, the sharp rise in the influence of chief executive officers at the expense of representatives of patients or health professionals may underscore the increasing industrialization of health care. It is not possible to find patients, patient advocates, clinicians, or clinician advocates at the top of this list. This trend placing health care influencers within C-suites, accountable to boards mostly comprising other corporate leaders, may explain the rise of business language and thinking

They suggested that it is possible that there is a

causal association between the concentration of executive influence and problems of patient care derived from efforts to optimize operational efficiency and financial performance, for example, clinician burnout, the heavy burden of treatment afflicting patients with chronic conditions, and the erection of barriers to care to optimize ‘payer mix.’

Americans increasingly find themselves in a corporate-centric healthcare echo-chamber, one in which the public will increasingly approach tough policy decisions having heard only the viewpoint from the top.

Furthermore, he suggested that the public may be befuddled by the current health policy debates, including those about universal health care and the possibility of reducing the power of commercial health insurance companies because

The new study by Longman, Ponce, Alvarez-Villalobos and Montori adds to the evidence that health care has been taken over by business-trained managers, and in the US, especially by large commercial health care organizations run by such managers.

Since we started Health Care Renewal, we have frequently discussed the rise of generic managers, which later we realized has been called managerialism.  Managerialism is the belief that trained managers are better leaders of health care, and every other sort of organization, than are than people familiar with the particulars of the organizations’ work.  Managerialism has become an ascendant value in health care over the last 30 years.  The majority of hospital CEOs are now management trained, but lacking in experience and training in medicine, direct health care, biomedical science, or public health.  And managerialism is now ascendant in the US government.  Our president, and many of his top-level appointees, are former business managers without political experience or government experience.

We noted an important article in the June, 2015 issue of the Medical Journal of Australia(1) that made these points:

Generic or managerialist managers by definition do not know much about health care, or about biomedical science, medicine, or public health.  They are prototypical ill-informed leadership, and hence may blunder into actual incompetence.  They are trained that they have a right to lead any sort of organization, which breeds arrogance.  These managers are not taught about the values of health care professionals.  Worse, they are taught in their business style training about the shareholder value dogma, which states that the main objective of any organization is to increase revenue.  Thus, they often end up hostile to the fundamental mission of health care, to put care of the patient and the health of the population ahead of all other concerns, which we have called mission-hostile management.  (Furthermore, it appears that the shareholder value dogma is just smokescreen to cover the real goal of managers, increasing their own wealth, e.g., look here.)  Finally, arrogance and worship of revenue allows self-interested and conflicted, and even sometimes corrupt leadership.

Maybe someday the top “influencers” in health care will actually be people who know something about health care and actually care about patients’ and the public’s health.